The coronavirus has fueled sky-high company profits but Amazon workers say they are being pushed to the limit. The first strike of its kind in Italy includes suppliers and delivery drivers. 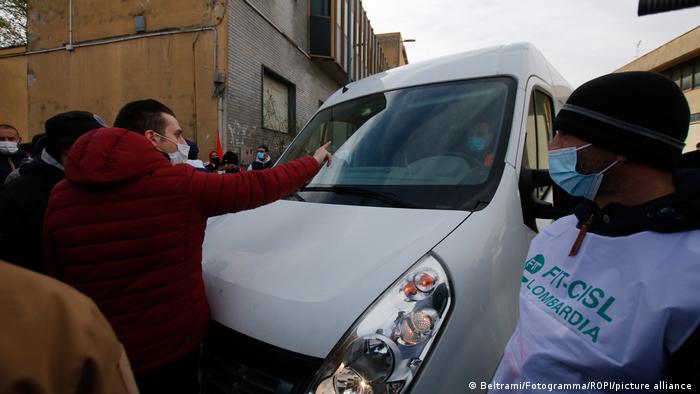 As Amazon's profits have risen exponentially, workers have been ordered to work even faster to meet increased demand

Organizers of Italy's nationwide strike of Amazon workers, suppliers and delivery drivers say 75% of the company's workforce heeded the call to protest on Monday.

The US e-commerce giant is calling employees "indispensable" but "they are not treated as such," according to a joint statement released by the Filt Cgil, Fit Cisl and UILTrasporti unions.

The unions say the "army of some 40,000 workers who never stop," has helped make Amazon's stellar profits possible. However, they said that the only thanks the employees have gotten is more work and more pressure to work faster.

An Amazon spokesperson gave a much lower number of participants, saying that fewer than 10% the company's employees in Italy took part in Monday's action.

"We employ 9,500 people in Italy. The vast majority of our employees did what they do every day, they came to work to deliver for their customers. Any suggestion to the contrary is just plain wrong," spokesperson Stuart Jackson told DW.

Rather than improved working conditions, better pay, the right to organize and a safety net to catch them should they fall ill with COVID-19, employees are being pushed harder every day, the unions said. Drivers, for instance, are currently delivering upwards of 180-200 packages each day.

"Amazon made huge profits thanks to the pandemic-era boom in online commerce and it is right that it should share part of these profits," the labor representatives said in a statement.

Amazon's Italy manager Mariangela Marseglia has said the company offers "a safe, modern and inclusive workplace, with competitive salaries that are some of the highest in the industry, benefits and great opportunities for career growth." However, the company has been hesitant when it comes to helping its workforce.

According to data from Milan's Politecnico University, Italy saw a record 31% increase in e-commerce in 2020, with €23.4 billion ($27.9 billion) in goods sold online for the year.

The unions called the strike after negotiations with the employers' association Assoespressi, which represent delivery firms, broke down: "We're not asking for pay rises right now but for a more humane work schedule," as Salvatore Pellecchia, FIT-CISL secretary general, told the Reuters news agency.

"These people make at least 100 stops a day, each involving not one but often two or three parcel deliveries. Problems like a traffic jam or a road accident are unaccounted for," he added.

Amazon has so far resisted union calls to discuss responsibility for drivers employed by third parties in Amazon's delivery chain.

Last month, the Seattle-based online behemoth announced that its profits more than doubled in the fourth quarter of 2020 — to $7.2 billion compared to $3.3 billion in the same period of 2019. Also, the company's revenue grew 44% to reach a record $125.6 billion. Last week, Amazon announced it would invest $143 million in a new distribution center in the northern city of Bergamo — creating of 900 new jobs and expanding its workforce to 10,400.