′All this junk gets dumped in Africa′: how to make eco art from rubbish | Environment | All topics from climate change to conservation | DW | 16.06.2017

'All this junk gets dumped in Africa': how to make eco art from rubbish

Kenyan artist Kioko Mwitiki’s life-sized scrap metal sculptures won him global acclaim. He tells DW about his art's impact, scavenging and environmental challenges facing Africa as it becomes the 'factory of the world.' 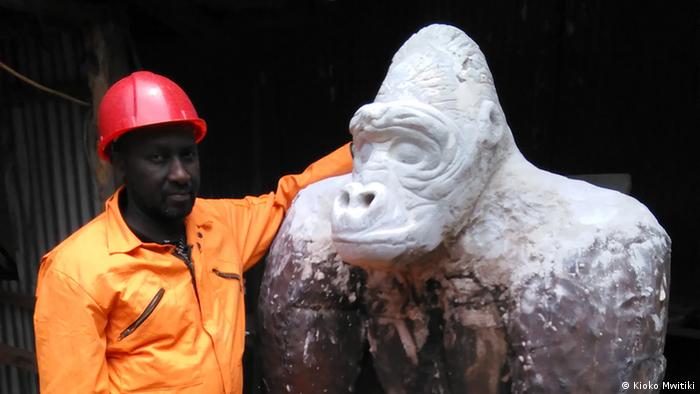 DW: Growing up in Kenya, you were expelled from your fine art course in the 1980s after getting caught up in student political demonstrations - how did you go on to get involved in environmentally-minded art?

I started working in a milk churn factory as an apprentice welder and I wasn't a very good welder then so I would spend a lot of time trying to put little pieces of junk together just to perfect my welding. What I was welding, I would not have considered that as art because it was a way of making my work perfect.

So one time, a white farmer came by and was looking to buy milk cans for his dairy farm, and he found where I had a whole bunch of stuff I had welded together. He spotted something that looked interesting and he came into the factory and asked, 'Who is doing this?' and they found me and asked me, 'That stuff, is that for sale?' I said, 'Yeah it’s for sale, you can buy it,' and he asked me to do more of that kind of stuff, and I said of course! I consider myself an accidental recycling artist.

I made a decision to recycle more and also raise the awareness of Kenyans that this stuff can actually be recycled and made into something nice that people would like to have in their gardens. I realized that I was impacting the environment where I was, as I was picking up all the junk in the yard and converting it into something and people started seeing that all this junk can be recycled and you can clean up the environment at the same time. 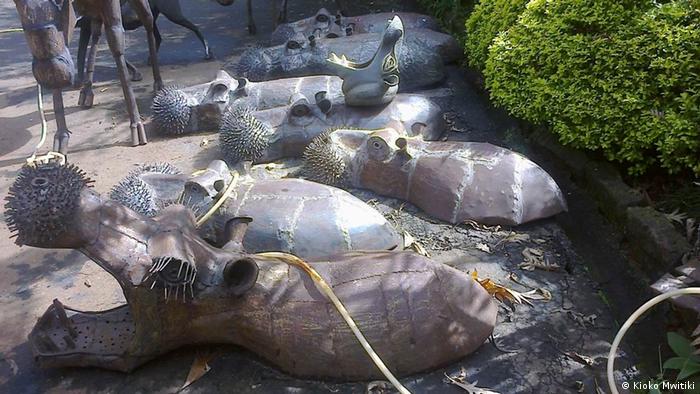 How do you find your materials?

For a long time I was a scavenger, sometimes driving in my little car and picking up stuff on the side of the road, very much like a junk collector of sorts. The stuff you collect in different places ends up making very unique pieces.

I have pieces with junk from all over the world, from Japan, from China, from America, so it's interesting that all this junk somehow in a way gets dumped in Africa. Africa is becoming the new factory of the world but there are also challenges of how to deal with all this excess dumping from other countries that are opening up factories up here.

We don't have the right mentality to recycle the stuff. They need to be policed over what kind of waste they are churning out and how we regulate that kind of waste. Right now, there's a huge appetite for growth, there's lots of companies coming in. I think this bigger mindset of recycling is very important, especially in Africa. 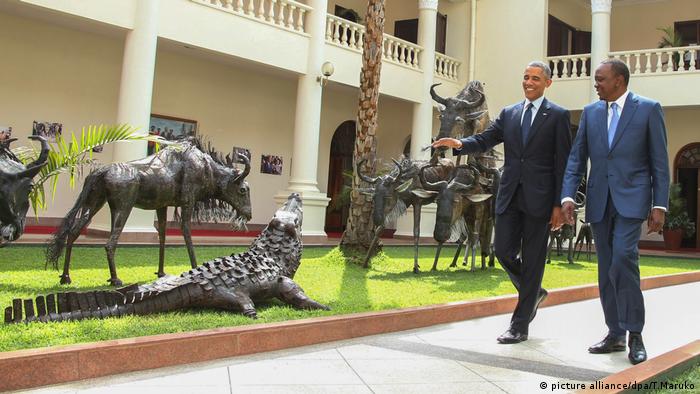 Barack Obama, then US President, saw Mwitiki's work on display at Kenya's State House in Nairobi on a visit in 2015

In terms of your art, what other waste materials do your use apart from metal?

At the moment I'm preparing for a very interesting exhibition because we have a lot of dumping from China of stuff that is very cheap and useless, so I'm planning to work on an exhibition that recycles things from China straight away from the container, as soon as they land at the port of Mombasa. They are new pieces, most of them are very cheap quality jewellery made of very cheap, very plasticky stuff. Also just everyday tools, like tongs that fall apart.

I want to make a statement that this stuff that's coming to Africa is really useless, it's stuff for recycling straight away, that it doesn't even need to go to the shelves. And I think I would be making a statement on the whole idea of recycling, and the big problem also is the unregulated products from China which are really poor quality. 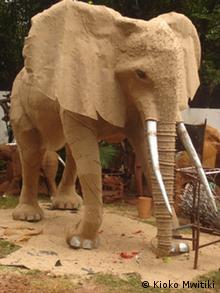 Wildlife is a key inspiration

Many of your artworks are animal sculptures - how did animals come to be one of your inspirations?

I grew up in a region in Kenya where there was a lot of wildlife, and this of course has really inspired me to make statements for wildlife. But it's also to show it to our people because there’s the assumption that every Kenyan has seen an elephant, but that's not true because sometimes these elephants are found in places exclusively for tourists and to get in there you really have to pay to see the wildlife.

So I also bring wildlife to people, I bring it down to a very visible level where children can touch my elephants, they can play around with my little cheetahs. That's why we are also making people conscious of conservation.

Here, people always wonder why you have to spend so many millions to move one elephant in a crate from one region to another and very little on proper schools that are within the national parks, there's a complete disconnect with how people view wildlife and how they are being treated. 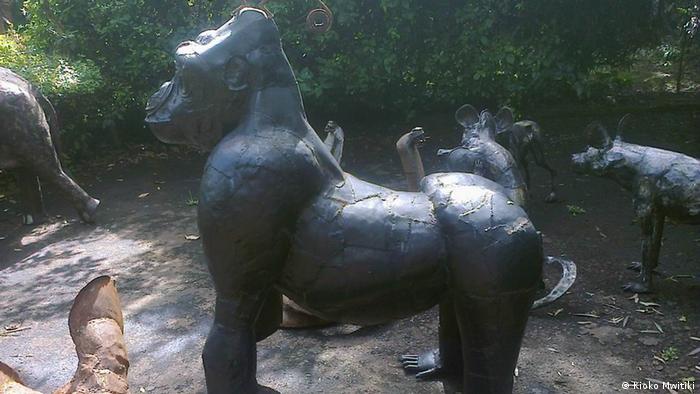 What do you think has been the impact of your art on your community?

Now that I've been doing it for 25 years, I'm beginning to see the impact more clearly because a lot of people have taken up recycling and especially bordering the national parks which have a lot of snares to snare animals, and people realized that you can actually make little animals out of snare wires so it's become an economic breadwinner. You use the wires to make these little animals and then you sell them to tourists.

Apart from that, the Kenyan middle class is growing, and they are tending to appreciate wildlife. For a long time, black Kenyans absolutely hated wildlife because we associated wildlife with white people, that they love animals, thinking 'If I bump into a little baby leopard, I will just take it to a white man’s house, because they love leopards, they love animals.' But we also need to love animals, we need to pick up a little antelope on the side of the road that has been left by its mother and take care of it. We are beginning to do that.

Kioko Mwitiki is a renowned artist who founded the Pimbi Art Gallery in 1992, which has been at the forefront of conserving the environment through education, recycling junk metal and promoting conservation and sustainability issues through art. He is one of DW’s eco ambassadors who will be speaking at Deutsche Welle’s Global Media Forum 2017, taking place from June 19-21.

Other people's waste is their only source of income. So-called "trolley pushers" can be seen all across South Africa's economic metropolis, collecting recyclable litter. Their activity also benefits the environment. (23.09.2015)