A German NGO has sent an air-ambulance with a coma-specialist team to pick up Russian opposition politician Alexei Navalny. But Russian doctors say he is too ill to move. 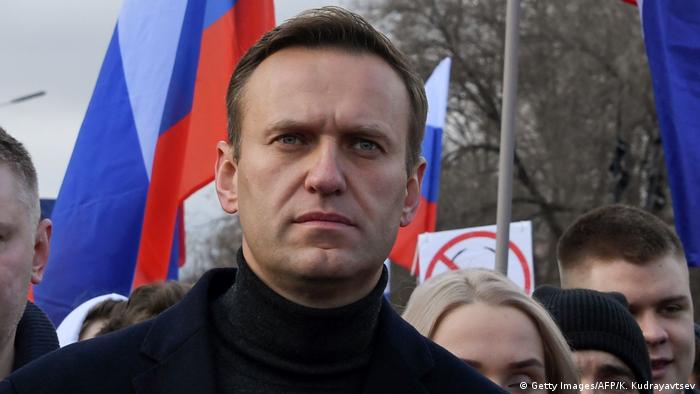 Russian doctors refused permission to move opposition politician Alexei Navalny on Friday, saying he is is too ill to allow him to board an emergency flight to Germany.

A German human rights group had hoped to bring Navalny to Berlin for treatment after a suspected poisoning left him comatose.

A Cinema For Peace Foundation spokesperson told DW that Berlin Charite hospital was ready to treat Navalny. A plane left Nuremberg in the early hours of Friday, and landed just after midday in the Russian city of Omsk — some 2,200 kilometers (1,367 miles) east of Moscow.

"If Navalny is in a state to be transported ... the plane will immediately fly to Berlin. His wife will accompany him."

However, just before the plane landed, doctors said he was still too ill to be transported.

His spokeswoman Kira Yarmysh said that this decision could doom Navalny.

"The ban on transporting Alexei is a direct threat to his life. It is deadly to remain in Omsk hospital without equipment or a diagnosis," Yarmysh said on Twitter.

"The plane we organized to evacuate Alexei should land in an hour. The ban on transporting Navalny is an attempt on his life. ... All necessary documents have been filed. An application from a family member, consent of the clinic in Germany for an appointment, documents for transportation. The hospital's decision is inexplicable and monstrous," Yarmysh wrote.

She later wrote that relatives and supporters would appeal to the European Court of Human Rights for obstructing his transport.

The head doctor treating Navalny said his condition had improved a little, but that the were legal questions that needed to be resolved before he could leave.

Ivan Zhdanov, director of Navalny's Anti-Corruption Fund, told reporters that police alerted him to the discovery of an unidentified lethal substance while he was in the office of the chief doctor.

He said a "lethal substance" had been found, posing a threat not only to Navalny but those around him as well.

Yarmysh alleged that Russian authorities were intervening to stop Navalny being treated in Germany, in case foreign doctors discovered the poison allegedly used.

Navalny, who is among President Vladimir Putin's fiercest critics, was hospitalized in Omsk after he lost consciousness during a flight to Moscow and his plane made an emergency landing.

Passed out after drinking tea

The lawyer suddenly passed out after apparently drinking black tea at the airport.

Spokeswoman Yarmysh said he was on a ventilator in a coma and his condition was serious but stable.

Yarmysh is convinced that he was "intentionally poisoned."

Navalny spends his time exposing corruption among the Russian elite and has suffered a constant campaign of intimidation and threats.

He suffered a similar incident last year, where he was also suspected to have been poisoned while in police custody.

Opposition politician Verzilov: Navalny's symptoms 'very close to what I have experienced'

In 2018, Bizilj helped to fly fellow Putin critic Pyotr Verzilov to Germany for treatment after he was poisoned. He was treated by specialists in the Berlin Charite hospital.

The prospect of treating Navalny in Germany was backed by Chancellor Angela Merkel during a news conference with French President Emmanuel Macron in southern France.

"If asked to, we will provide him with medical assistance, including German hospitals, but the request has to come from there," Merkel said.

The two leaders said they were deeply concerned about what had happened to the politician.

The French leader said France was ready to provide all assistance that Navalny needed, including asylum and medical care.

Russian President Vladimir Putin said that Moscow's Gamaleya Institute has registered the world's first COVID-19 vaccine for use. He said his daughter is among those already inoculated.

A criminal investigation has been opened into attempts by the opposition to "seize power" following disputed elections. The Coordination Council was set up by allies of exiled opposition leader Sviatlana Tsikhanouskaya.