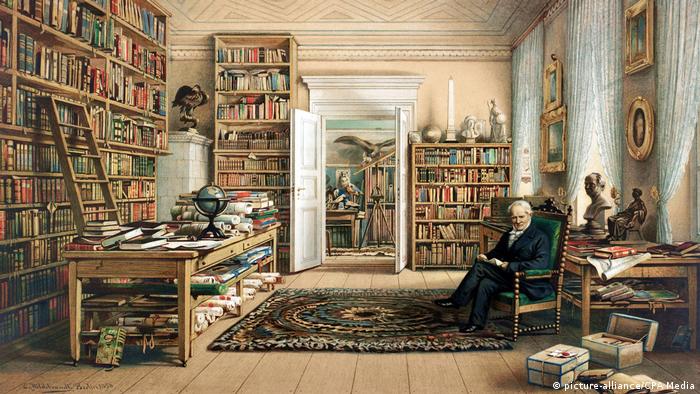 He was medium height, nearly always wore plain black clothes, spoke faster than anyone else in at least four languages and was well- mannered. He was also one of the most famous men in the world. And for many 19th century travelers a visit with Alexander von Humboldt was a major right of passage. Those who were able to spend an hour or two with him often wrote that he was more impressive than any museum, monument or building in the city — indeed he was the reason to come to Berlin.

Humboldt was born in Prussia during the reign of Frederick the Great and traveled throughout Europe and the Spanish colonies in Latin America before settling in Paris. After staying there for two decades to work on his numerous scientific books, he returned to Berlin a national hero in 1827.

After moving back he had two different apartments before finally moving into one at Oranienburger Strasse 67. He stayed here for the next 17 years from 1842 until his death in 1859.

But he was not alone. With him lived his valet, Johann Seifert, Johann's wife, Emilie, who was his cook, and their five children. And that's not all. He also had a gray vasa parrot named Jakob. The bird was part of Humboldt's household for over 30 years and even outlived the scientist. 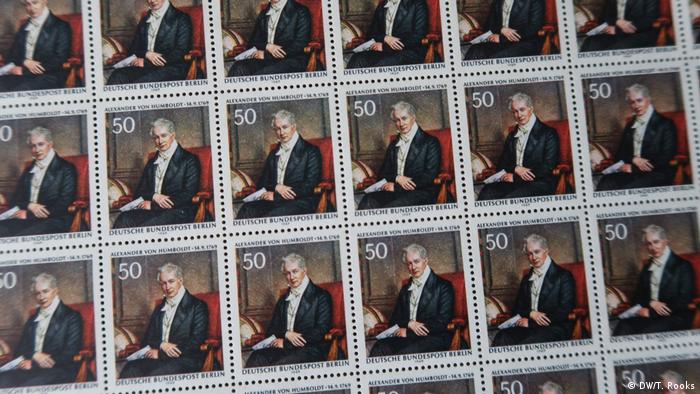 Over the years Humboldt has been honored in many ways: stamps, paintings, books and sculptures

The unassuming three-story building was near central Berlin, but far enough away from the elite to be seen as distinctly working-class. In a letter Humboldt noted his "miseries" at having to move "into a detestable house in the Siberian ward of the city, the Oranienburger Strasse." Yet he wanted to be out of the hustle and bustle in order to work.

He was also on a tight budget, dependent on a stipend from the king.

Coming for a visit

The building was a "dull, clay-yellow color." The ground floor where the Seifert family lived had six windows facing the street and a large carriage door. It was through this passage that visitors found the steps upstairs. To discourage uninvited visitors, the name on the door was Seifert, not Humboldt.

Bayard Taylor, a young American who paid Humboldt a visit in November 1856, reported "The bell-wire over Seifert's name came from the second story. I pulled: the heavy porte-cochere opened of itself, and I mounted the steps until I reached a second bellpull, inscribed 'Alexander von Humboldt.'" 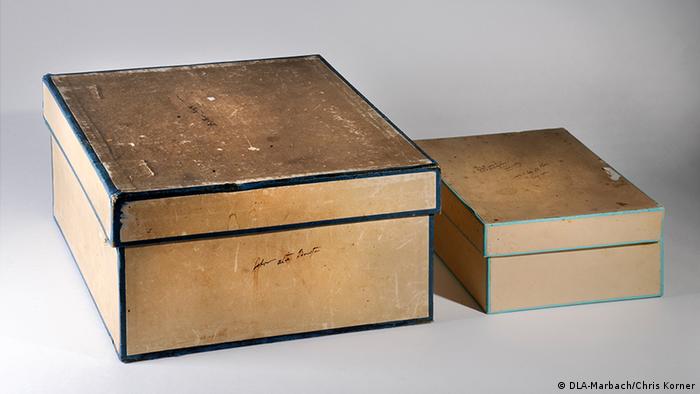 These two boxes which Humboldt used to store letter are similar to ones shown in his library that contained his famous travel journals. Amazingly these have survived and are part of the German Literature Archive in Marbach, Germany

The upper floor where Humboldt lived had seven windows facing the street. Visitors first entered a small antechamber full of books and stuffed birds. But Humboldt was not a collector and this wasn't just a cabinet of curiosities, it was his home and reflected his travels. The next room was the library.

At first view this room looks like a Victorian clutter box. Though the doors, curtains, stenciled ceiling and floor are typical for the time, everything else was very personal. It is here that Humboldt often received guests like fellow scientists, ambassadors and even the royal family.

Appropriate for the building, the furniture was rustic and utilitarian. The only luxuries were his singular collection of manuscripts, maps, books — including copies of all of his own works, many with handwritten notes — and some artwork, most of which were gifts. 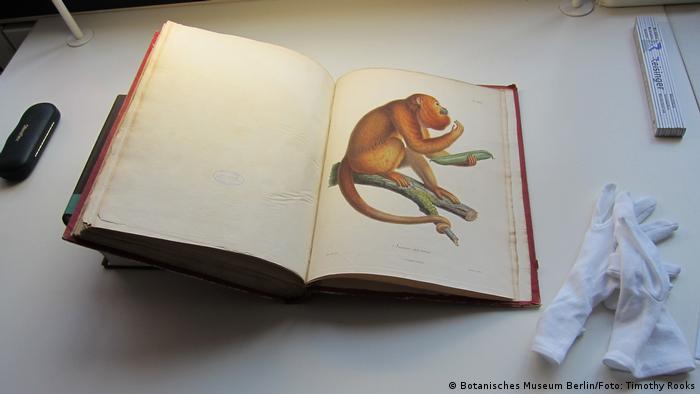 One of the many books Humboldt wrote in his long life. This one is dedicated to the animals of South America

Though besides being useful for his work, Humboldt's books also acted as a heavy anchor and he feared having to move.

Two years after settling in, Humboldt mentioned to his friend Joseph Mendelssohn that an unbearable rent increase was threatening. The banker was moved to action and that same day Humboldt received a letter: Mendelssohn had bought the entire building. Humboldt would never need to move again.

Past the library was Humboldt's study where he worked — and for a time kept a six-inch chameleon in a box with a glass lid. The room was dominated by a large wooden desk that faced the window and a world map on the wall. Guests never saw the rest of the rooms, but many commented on how well the apartment was heated.

Overall it wasn't a  big home, but it fit his needs with a big library and a study. We know what these two rooms in particular looked like from watercolors made by artist Eduard Hildebrandt.

We know more about Humboldt's life from an American correspondent from the "Commercial Advertiser" who visited the 81-year-old at home and sent this dispatch in on January 1, 1850: "The habits of Humboldt are not remarkable, except in the limited number of hours necessary to sleep and in temperance and regularity. His time is systematically divided. He rises at six in the winter, and five in the summer, studies two hours, drinks a cup of coffee, returns to his study, and commences the task of answering his letters."

"From 12 until two he receives visits, and returns to work at two. At four he dines, in summer with the king, in winter at home. From four until 11 he passes at the table, and generally in company with the king, but sometimes at the meetings of learned societies, or in the company of his friends. At 11 he retires to his study, and continues there until one or two, answering letters, or writing his books, or preparing them by study." 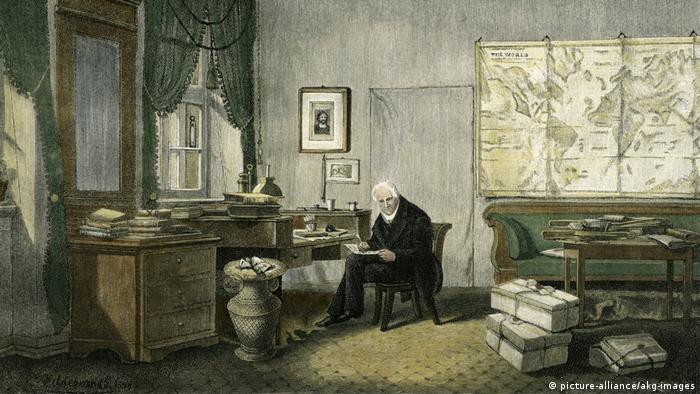 Humboldt kept to his schedule as much as his many engagements allowed. In September 1858, he spent his 89th birthday with the queen in Potsdam. The following March, he delivered what would turn out to be his last addition to his "Cosmos" masterpiece.

That same month he sent a letter to a Berlin newspaper asking admirers to refrain from sending him letters for "publications concerning matters I know nothing about, manuscripts for appraisal, augmentation of autographical collections; offers to look after, distract and amuse me." It may seem a bizarre request, but he needed time for himself and his letter was reprinted over 130 times in papers around the world.

Only a few weeks later, Humboldt died on Friday, May 6, 1859 at 2:30 p.m. in his apartment and his body was laid out in the library. After hearing the news, Queen Victoria wrote to her daughter: "Humboldt's death has deeply, deeply grieved us!" Adding, "He, like the old Duke of Wellington — was one of those people, who one thought never could die! Prussia has lost much in him!"

Four days later, the funeral was set. Buildings throughout Berlin were decorated with crepe and black flags. The police cordoned off Humboldt's street and only allowed in invited guests. The man who had lived such a disciplined life would have an orderly funeral. 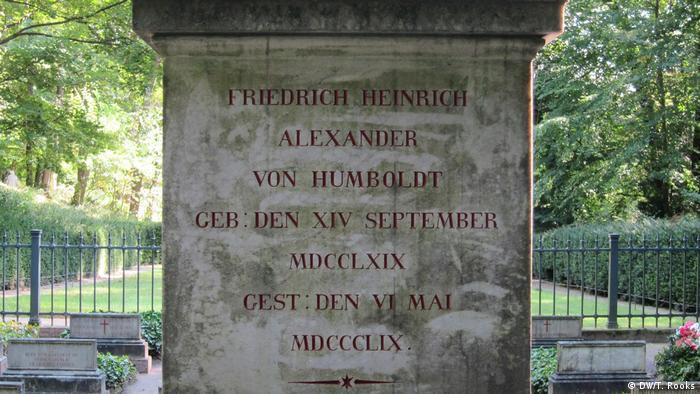 Alexander von Humboldt was buried next to his brother Wilhelm at Schloss Tegel, the family home just north of Berlin where they spent much of their childhood

At 8:00 a.m. the oak coffin was brought out and put on a funeral carriage drawn by six black horses from the royal stable. The procession to Berlin's cathedral included the Seifert family, court and city officials, the Humboldt family, members of the diplomatic corps, 600 students from the university, academics and ordinary citizens. Following them was a long line of empty carriages. The royal family greeted the coffin at the church.

A little something to remember him by

After that Humboldt's life was quickly dismantled. As a sign of gratitude for 30 years of service, his servant Johann Seifert inherited nearly everything. In September, most of the artwork was sold at auction. A total of 490 lots included oil paintings, drawings, medals, photographs, sculptures, minerals, a meteorite and even his desk. 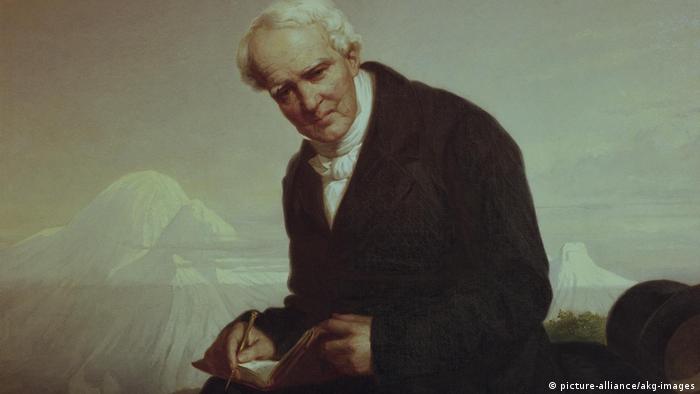 A painting of Humboldt in old age with Chimborazo in the background. Though he died 160 years ago, he continues to serve as an inspiration to scientists, travelers and adventures

Separately Humboldt's unique library was sold twice before it was finally put up for auction at Sotheby's in London in 1865. The catalog alone was nearly 800 pages and included 11,164 lots. The auction was scheduled to take 31 days; sadly on the third day there was a tremendous fire that destroyed most of the books. Only 574 volumes were deemed salvageable.

Though Humboldt's possessions were scattered to the wind his life's work lives on. Yet it is remarkable that from this tiny apartment in "a detestable house in the Siberian ward of the city" he was able to follow his natural curiosity wherever it took him and bring science to millions around the world.

Alexander and Wilhelm von Humboldt are viewed as cosmopolitans and adventurers. But rather than painting a heroic picture, the first major show on the brothers in Germany depicts them in their historical context. (21.11.2019)

Humboldt: "Everything is Interaction"