Artificial intelligence is expected to transform our society in numerous ways. Some artists are also using it to better highlight the global impacts of climate change. 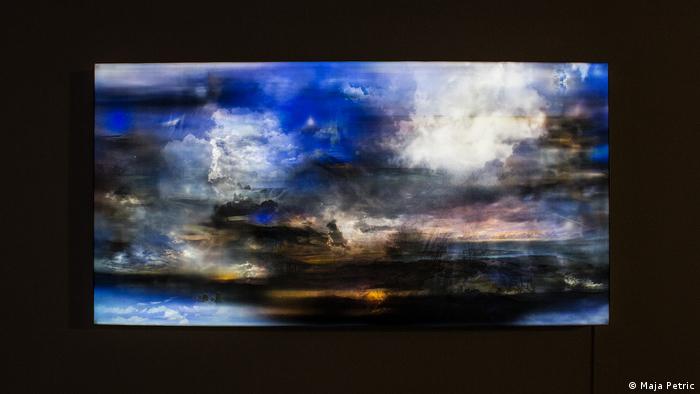 The effects of climate change are all too real. The world is warming, sea levels are rising, species are on the verge of extinction and millions of people are suffering — both physically and mentally.

Although these effects can be seen and felt all around us, the data measuring these impacts can be complex and confusing if not presented properly.

That's where visual data scientists come in. Their job is to collect and convey statistics showing the impacts of climate change so that governments and policymakers can make informed decisions based on the best available evidence.

If that evidence is too complex or too broad to understand, then policymakers could have a hard time deciding on how best to handle certain problems.

"Of course, you cannot explain everything that's behind the statistics and you need to target the correct audience, but visuals are easily digestible and easily understood and can be used to present complex information directly and in powerful ways," he told DW.

Read more: Will AI change the future of music?

Nocke admitted, however, that scientific visuals are somewhat limited — and that this limitation can hinder development and progress when used to inform the public.

"We don't enjoy the same creative freedom that artists enjoy, which means our visuals can only go so far in raising awareness," he added. 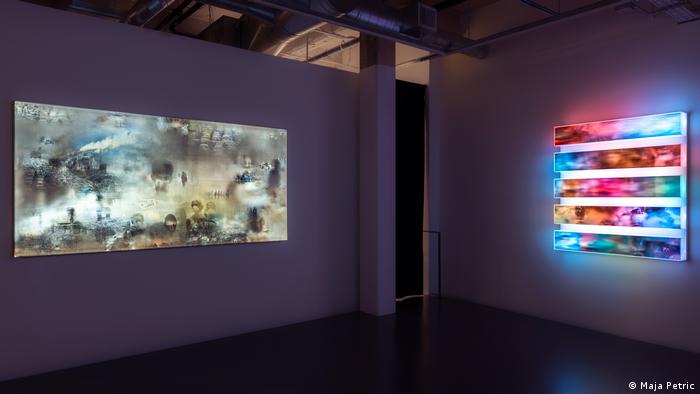 Can an algorithm be creative?

Maja Petric, an artist who lives on the American Pacific coast in Seattle, wants to raise the bar and convey climate data in unique, inspiring ways so that more people can become aware of climate issues.

Petric explained that the AIEye algorithm she helped to create with computer scientist Mihai Jalobeanu searches thousands of images on the internet for climate change-related phenomena, such as air pollution, global warming, overpopulation and deforestation.

The system then processes all the found images, analyzes their salient properties and summarizes the data into one image — or an image within thousands of evolving images — that she calls the "Lost Skies."

The images used for Lost Skies come from Hurricane Maria, California wildfires and other natural disasters. The purpose of the images, she explained, is intended to express the essence of nature affected by climate change.

But she admitted that her artwork wouldn't have been possible without artificial intelligence.

"My AIEye program sifted, learned and reasoned through massive amounts of data that no human would ever be able to review," she explained.

That being said, Petric is firm that human creativity created the project, and that it was her imagination that got things off the ground in the first place. 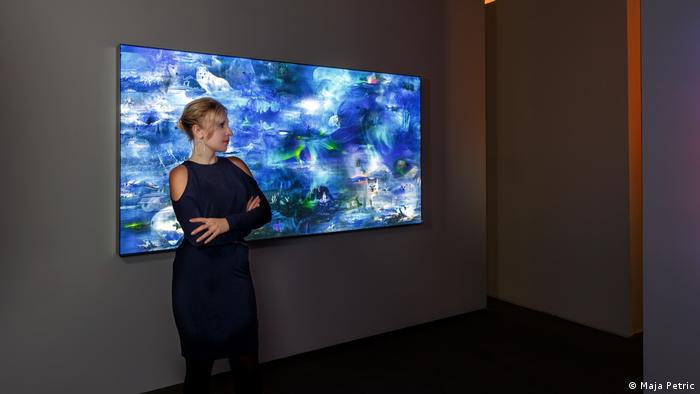 Each pixel in Lost Skies evolves as the algorithm progresses, says Maja Petric

And while some people fear the advancements of artificial intelligence and how the new technology could impact the world, Petric welcomes its inclusion.

"AI will not replace art. I believe AI has a capability to exceed certain human abilities, but I believe that human creativity is not one of them," she said.

Read more: AI could help us protect the environment — or destroy it

AI has also been instrumental in other fields, and most recently has aided students at Stanford University as an environmental monitoring tool in detecting environmental violations through data analysis and predicting where funds can yield the most benefits.

It has also helped in reducing energy consumption in Google data centers around the world.

In a way, artificial intelligence has become a game changer in fighting climate change. And it's about to make a lasting impact in the art world as well.

"It's important for artists to use AI and it's crucial for AI to be used by artists. AI will shape our world more in the next 100 years, and as a woman artist, I want to be part of that conversation right now," Petric said.

Petric also highlighted the importance of science in art.

"In many ways, my art is inspired and shaped by science. Science provides us with information, facts and organized knowledge that can be cognitively processed. Art, meanwhile, is a medium that is deeply visceral and has potential to emotionally convey data, information and stories. As such, art is moving and can make a lasting impact," she said.

Thomas Nocke, who had some experience creating data artwork as a university student, welcomes the artwork and others like it but says science is still the most important medium when presenting data.

"I worry that such artwork maybe takes too much away from the data. But in the end, climate science needs visuals and typically, these visuals are very important," he said.

Why automated art by creative Twitterbots is not all fake

Twitterbots have a bad rap — that all they do is spread false news. But some are creative geniuses, and computer scientist Tony Veale told DW why. (05.09.2018)

Art and science join forces to save corals

A musician-marine biologist duo using film to inspire conservation have stumbled across some very unusual urban corals in Miami. Their discovery could expand understanding of how reefs react to stress. (14.12.2017)