Why automated art by creative Twitterbots is not all fake | Science| In-depth reporting on science and technology | DW | 05.09.2018

Why automated art by creative Twitterbots is not all fake

Twitterbots have a bad rap — that all they do is spread false news. But some are creative geniuses, and computer scientist Tony Veale told DW why. 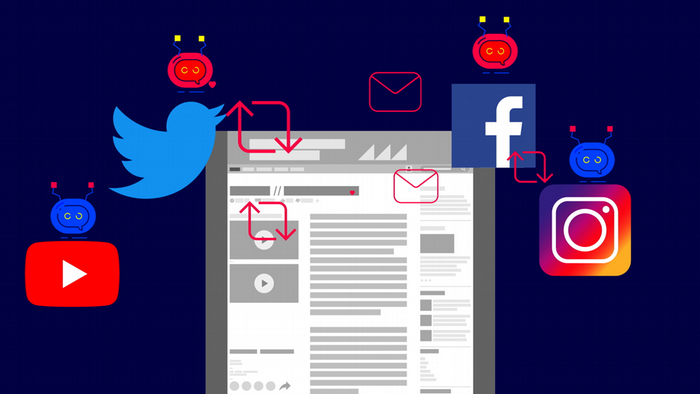 DW: We tend to think of bots, whether they're Twitterbots or (ro)bots on other platforms, as being negative — automated artificial intelligence systems, programmed by bad actors who want to misinform the public or influence elections. But you and your co-author, Mike Cook, have decided to take a more positive look at the creative side of bots. Why?

Tony Veale: Well, yes, there is a malignancy at the heart of the public image of bots — that they're simplistic, zombie-like, that they behave badly and are quite dangerous when they behave in concert on behalf of bad actors. But there's a very large community of people who build bots as a form of creative expression, and their bots are artistic tools, if you will. They are a form of automated art, a "meta-creativity," where you build something that's created for you.

So Mike and I are coming to this community as AI [artificial intelligence] people. Specifically, we're members of a community called computational creativity, which tries to understand the computational basis of human creativity, and tries to imbue machines with some measure of that human creativity. And we see bots as an ideal platform for building these systems because they're public-facing, they're a popular diversion and people follow them. They also become a shop window, where your systems can autonomously produce stuff into the world without your supervision, without your "gatekeeper" function, and surprise you and surprise others.

We come across bots all the time and yet it's fascinating to read about the various types of bots — the watcher bots, the trolls and troll hunters, protest bots, those that interact with human Twitter users, or "mash-up" bots that take two headlines to create something new, often something satirical. Some are indeed very creative. But I'm still struggling to understand why people would want to follow an automated thing like a bot. I always thought the idea behind social media was to make human interaction "great again," if you'll allow me to abuse that phrase.

It's worth stating at the outset that most bot makers, who have an artistic or philosophical approach, will have no intention of fooling humans into following systems that pretend to be human. So bots tend to wear their botness on their sleeves, and that's something that people find attractive, because a bot takes or embodies a simple idea, lets say how language works or how politics works. You take this simple view of how a thing works and then the bot automates it.

It allows you to see that, 'Oh, yes, within this simple view of this domain or this topic, there is scope for weirdness and strangeness and beauty and wonder and stupidity all at once.' It's like you're being invited to live inside an idea. Instead of just talking about the idea you talk about the outputs of the idea. People find that fascinating and they want to be there when the bot says something interesting.

Of the examples you mention in the book, the one I really liked was @everycolorbot, which tweets every color in the RGB [Red, Green, Blue] spectrum. It's such a brilliant, simple idea. But you touch other more complex ideas, and explain how to program bots. And that made me wonder whether it's by understanding how this automated creativity works that we might get a better understanding of other forms of people-to-machine interactions. After all, automated systems are getting more and more prevalent in life.

Quite possibly, though it has to be said that most bots don't contain a tremendous amount of complexity. One of the aesthetics valued by bot builders is simplicity. So people take an idea and they implement it — often in the space of a day. They'll put it out onto a social media platform, whether it's Twitter, or Reddit, or Facebook or whatever, and then they let people enjoy the outputs of that.

So we're not talking about the kind of technology that is used to decide whether you're a credit risk when you apply for a loan at a bank, or whether you're a security risk and should be searched at the airport. Those can be quite frightening. But then those systems are open to scrutiny in ways that people and their prejudices are not, so there's a pro and con to having these things systematized.

I would say that one of the things about Twitterbots that appeals to people is that they reveal the automated ways in which we behave. So it's interesting to see people interact with bots, just as it's interesting to see people interact with each other. And I think people do have this automated kneejerk, simplistic algorithm for dealing with others that they believe to be on a different page politically or socially.

When you say "interacting with bots," you explain in the book that people do send messages to bots and that there are some bots that will respond to human tweets, like @yourevalued, so there is an interaction of sorts.

Yes. And it would be really nice to have a bot that could have a real conversation. The best bots aren't about fakery — or if they are, they wear their fakeness on their sleeves — so that there's no trickery involved. But I think you're right to suggest that bots will become more sophisticated.

They're already quite sophisticated in applications that deal with commerce. So, for instance, big companies, conglomerates, are investing more and more in automated systems to talk to their customers online to process their complaints, or handle their concerns. Some of these systems, like at Bank of America, they operate on Twitter and they try to find people complaining about a bank service, or a bad experience that they had, and then they try to intercede in ways that are sometimes humorous and sometimes a little frightening. But more and more of this interaction will be automated. So we'll begin to miss the foibles of humans, I suppose, but that will give us the opportunity to build bots with foibles of their own, and create bots that try to be funny.

One of the things I really appreciate about bots and how they interact with people is that if the bot tries to be creative, [its human conversation partner] tries to be creative in response, so the bot is a spur for human creativity. It's not a replacement for human creativity, but it's a little prod, a little attempt to get the human at the other end of the conversation to be more whimsical, more playful, creative, or philosophical. And in that sense, they are an unalloyed good on social media.

Tony Veale is an associate professor at the School of Computer Science, University College Dublin. He co-authored the book "Twitterbots: Making Machines that make Meaning" with Mike Cook, a senior research fellow at the University of Falmouth, UK. The book is published by MIT Press (September 2018). If you would like to try building your own creative Twitterbot, check out their resource on GitHub. There are other community resources like Cheap Bots, Done Quick — it's easy to get started. But make sure you check the Twitterbot code of conduct and whatever you do, be nice!