After parade of power, attention turns to China′s military presence in the Pacific | Asia| An in-depth look at news from across the continent | DW | 03.09.2015

After parade of power, attention turns to China's military presence in the Pacific

Chinese President Xi Jinping has asserted that his country is not seeking regional hegemony. But China's show of power during a military parade to mark Japan's WWII surrender does not correspond to these claims. 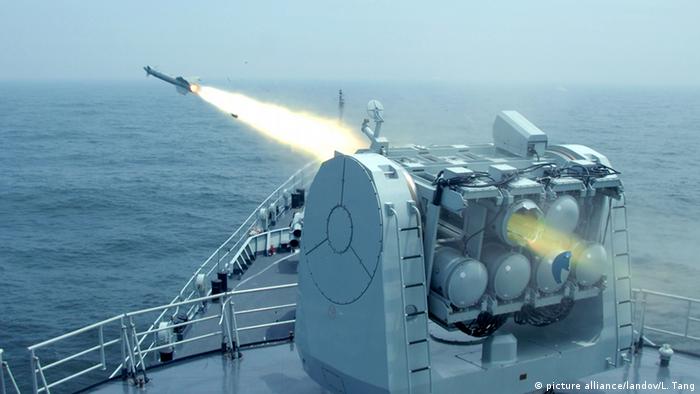 Since the beginning of the 21st century, China has increased its military spending substantially. The rise in military expenditure was also a result of the country's economic growth - at least until recently. But China's neighbors, especially those who share coastal borders with it - are worried about Beijing's motives. Moreover, the United States' traditional hegemony in the Pacific has been challenged by China's military assertiveness.

Western experts believe that China is rapidly modernizing its navy and air force. And President Xi Jinping's announcement at a military parade in Beijing - to commemorate the 70th anniversary of the end of World War II - that China will reduce the number of troops in the People's Liberation Army by 300,000 matches these assessments.

According to Siemon Wezemann, an expert on arms and military expenditure at the Stockholm International Peace Research Institute (SIPRI), China has introduced larger and more modern warships to its navy over the past decade. "The ongoing programs for larger warships will make the Chinese navy probably the second-largest 'high seas' navy soon," he told DW.

China's submarine fleet already has 66 conventional units - in addition to four units equipped with Intercontinental Ballistic Missiles - and several large amphibious assault ships. Experts also believe that the construction of an additional two to four carriers has been planned along with in-service aircraft carrier Liaoning.

"The introduction of modern warships such as the Jiangkai II frigate and the Luyang II destroyers have facilitated the so-called 'blue-water operations,'" Rukmani Gupta, a military analyst at IHS Jane's, told DW.

A signal to the US

According to defense analysts, the Chinese air force is also investing heavily in the modernization of its fighter planes. Gupta says that China will also build refueling aircraft to enhance its "strategic reach." The development of a large military transport system, Y-20, will also be enhanced.

China's military planners want to establish a reliable long-distance deterrence system. "The Chinese strategy is to try and keep US forces from approaching the so-called 'Near Seas.' These stand-off capabilities are intended to make the US think twice before it moves assets forward into the Western Pacific," Andrew Scobell, a security analyst at the US-based RAND Corporation, told DW. The major aim is to stop US interference in the Chinese sphere of influence, he added.

Given the fact that the US is a key military ally to China's neighbors such as Japan and the Philippines, and that these countries have territorial disputes with Beijing, these strategic maneuvers have a contemporary relevance, according to experts.

China's military planners have long been talking about the so-called "first and second island chain" to distinguish Chinese spheres of influence. The first of these chains along the southern Japanese islands stretches to Okinawa and Taiwan, and run along the coasts of the Philippines and Malaysia in the South China Sea.

According to an analysis made by The Economist, it has been the task of the Chinese navy since 2014 to prove itself as a dominant power in disputed waters and repel any enemy forces far behind the first island chain. The "second island chain" lies at 1,000 kilometers in the Pacific Ocean and covers the sea area of Tokyo on the Mariana and Caroline islands to the east of Indonesia.

Analyst Wezeman says another reason behind the buildup of long-range weapon systems may be China's dependency on imports and exports, often from far away. "Protecting its lines of communication - or at least deterring any potential enemy from interfering with them - needs either reliable allies along them - which China doesn't have - or the ability to deploy forces in, for example, the Indian Ocean," said the SIPRI expert.

One could take this further to the use of force to protect Chinese interests in, for example, African countries where raw materials are imported from and where Chinese companies have started to establish large farms to produce food for China, Wezeman added.

According to the London-based International Institute for Strategic Studies (IISS), this may also explain why China's participation in an anti-piracy mission in the Indian Ocean doesn't just serve security purposes on the high seas. IISS says that such missions also offer the Chinese an opportunity to boost ties with distant countries, gain experience and have a presence in those regions.

Beijing has hosted a spectacular military show marking 70 years since the end of the Second World War. The parade comes amid tensions in the region over China's military assertiveness. (03.09.2015)

Beijing wants to display its power with its military parade to mark the 70th anniversary of the end of the Second World War in Asia. However, this does not mean there is more risk of war, says DW's Frank Sieren. (02.09.2015)

'Veterans from Taiwan are welcome'

China is celebrating its role in World War II and the victory over Japan by holding a military parade and inviting Taiwanese veterans. But the gesture has been received with little enthusiasm on the island. (01.09.2015)