Afghanistan talks without Taliban: What can they achieve? | Asia | An in-depth look at news from across the continent | DW | 16.10.2017

Afghanistan talks without Taliban: What can they achieve?

After a one-year hiatus, the four-nation Afghanistan peace talks are taking place in Oman. Pakistan is under pressure from Donald Trump's administration to honor its counterterrorism commitments in the region. 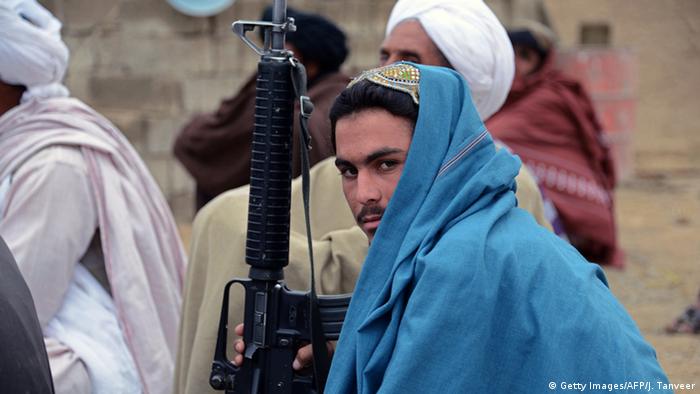 Representatives from Afghanistan, China, Pakistan and the United States are meeting in Muscat, Oman, on Monday to revive stalled peace talks with the Taliban. The insurgent group, however, is not participating in the sixth Quadrilateral Coordination Group's (QCG) meeting.

Taliban spokesman Zabihullah Mujahid said last week the group was not interested in the initiative, which was launched in 2015. This is the first QCG meeting after the death of the former Afghan Taliban chief Mullah Akhtar Mansoor in a US drone strike in Pakistan's Balochistan province in May 2016.

Still, the Muscat talks are believed to be significant because Islamabad and Washington appear to be ironing out their differences over how to find a political solution to the protracted Afghanistan conflict. 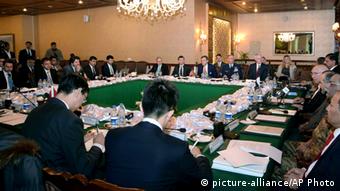 Previous five QGC meetings did not yield any result

Last week, Pakistani authorities played an important role in securing the release of a North American couple from the Taliban-linked Haqqani Network's captivity. US President Donald Trump, who had earlier criticized Islamabad for not doing enough against extremist groups in the Afghanistan-Pakistan region, said "the Pakistani government's cooperation is a sign that it is honoring America's wishes."

It appears that Trump's carrot and stick policy for Pakistan is yielding results. The talks in Muscat are also an indication that Pakistan's security establishment, which has long been accused of sheltering and backing proxy jihadists, is at least willing to pay attention to Trump's demands.

"The meeting is aimed to review Pakistan's commitments on talks (peace) that had been made at previous meetings," said Shekib Mustaghni Mustaghni, Afghanistan's deputy foreign minister.

"The resumption of the QCG process shows that Pakistan is feeling the international pressure," Fiaz Mohammand Zaland, a Kabul University lecturer, told DW, adding that Islamabad wanted to assure Washington that it was willing to work with Kabul toward bringing the Taliban to negotiations.

"Pakistani officials want to show to Americans that they are doing their part in the process," Zaland added.

The Pakistani delegation for Muscat talks is led by Foreign Secretary Tehmina Janjua. Pakistan's Foreign Minister Khawaja Asif recently told US media he was optimistic about the meeting.

"The quadrilateral arrangement will again be in operation. So, that is something we still hope will… still work," Asif said.

But Afghan officials and politicians are not very hopeful about the process, mainly due to the perception that Islamabad will not relinquish support to groups like the Haqqani Network.

A change of heart for Pakistan?

Afghanistan and Western countries have long accused Pakistan of distinguishing between "bad and good Taliban" - the ones that attack Pakistani soldiers, and the ones that it allegedly uses as proxies in neighboring countries.

Islamabad continues to deny it is backing the Haqqani Network, which is largely based in its Waziristan region close to the Afghan border.

Siegfried O. Wolf, the director of research at the Brussels-based South Asia Democratic Forum (SADF), says he cannot identify any significant change in Pakistan's foreign and security policy despite Islamabad's attempts to reach out to Washington.

"Pakistan still wants the participation of the Taliban in the Afghanistan government," Wolf told DW, adding that "there is no proof that the military operations in North Waziristan have significantly destroyed the operational structure of the Haqqani Network as claimed by the military."

Afghan expert Miagul Wasiq believes the success of the peace process largely depends on Pakistan's role. If Pakistan really wants to bring the Taliban into negotiations, it would be impossible for the militants to turn them down, he told DW.

"It is clear that the Taliban leaders are based in the Pakistani cities of Peshawar, Karachi and Quetta. Pakistan hasn't forced them to shun their activities and stop using its soil," said Wasiq. "If Pakistani officials stop backing them, I am sure the militants will have no option but to join the peace talks."

But Naufil Shahrukh, a researcher at the Islamabad-based Institute of Policy Studies (IPS), believes Kabul and Washington need to be more flexible about their approach regarding peace talks.

"The Taliban have always been willing to talk, but with a precondition of the complete withdrawal of NATO forces from Afghanistan. This, obviously, is not acceptable for the Afghan government and the US," Shahrukh told DW.

Shahrukh also says that Pakistan has practically no influence over the Taliban leadership. "Such preconceived notions should be cleared before any meaningful initiative can take root," he said. "We must admit that the Taliban are still a potent force in Afghanistan. They control, and have public support, in several Afghan provinces."

Analyst Zaland believes the biggest drawback of the QGC Oman meeting is that it does not include any representatives from the Taliban. "With the major stakeholder in the conflict absent from talks, there cannot be a meaningful discussion," he said.

But Wahid Muzhda, a Kabul-based security analyst and a former member of the Taliban, is of the opinion that the meeting in Oman is aimed at bringing Pakistan and Afghanistan on the same page rather than securing a deal with the militants.

"Kabul and Islamabad are under pressure [from the US] to improve bilateral relations. I believe this meeting is aimed at peace between Pakistan and Afghanistan and not negotiations with the Taliban," Muzhda told DW.

"The successful peace agreement with Hizb-i-Islami [a militant group headed by former prime minister and warlord Gulbuddin Hekmatyar] should demonstrate to Taliban groups that we have the capacity and the political will to enter and successfully conclude an intra-Afghan dialogue," Ghani said, urging the Taliban to "opt for love instead of war, ballots instead of bullets and dialogue instead of destruction."

Ghani also called on Pakistan to intensify dialogue with his government "to secure regional peace and security."

But Afghan experts are not optimistic about either the Afghan government's capacity to forge a Hizb-i-Islami-style deal with the Taliban or Islamabad's cooperation.

"Both Kabul and Islamabad are trying to buy time with meetings. It is unlikely that any progress toward peace will be made," Zaland said.

Islamabad, according to Zaland, is trying to make it through the current phase of tense relations with Washington, while Afghanistan is trying to downplay its failures by blaming Pakistan for its inability to engage in any fruitful peace process.

US President Donald Trump warned against a "hasty withdrawal" from Afghanistan while announcing a new strategy for the war-torn country. However, he refused to provide details on the number of additional troops. (22.08.2017)