Seventeen years of war, tens of thousands dead, millions in need of humanitarian assistance — the call has long sounded for peace in Afghanistan. But can talks with the Taliban succeed without the Afghan government? 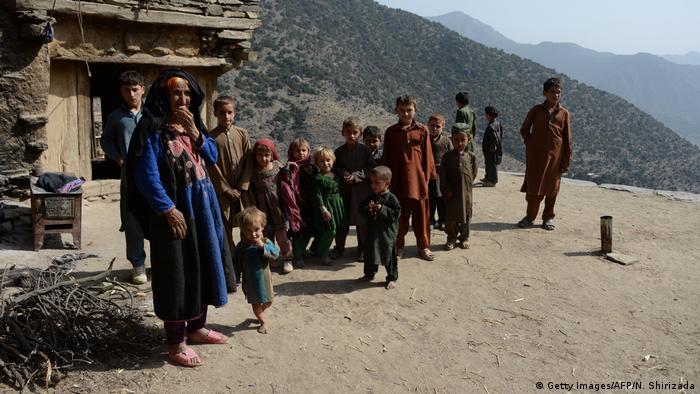 Almost two decades of war between US-led coalition forces and the Taliban have left the people of Afghanistan on shaky ground.

About one-third of Afghanistan's 34.7 million people are in dire need of humanitarian assistance, and sparring between the fragile Afghan government and the Taliban has intensified over the past years, making the delivery of aid to those who need it all the more difficult.

Afghanistan today is a tale of two countries: one rural and mountainous, isolated from international aid and squarely under the control of the Taliban, and one internationally recognized, yet vulnerable, preparing for a murky future after President Donald Trump's recent announcement that he would promptly withdraw about half of the 14,000 US troops stationed there.

The country has become a humanitarian and security tinderbox, and the need for peace is more urgent than ever, elevating Afghanistan to a priority agenda item at this weekend's Munich Security Conference. But new impetus by the US government to negotiate directly with the Taliban to bring about an end to its longest war is fatally flawed: The Afghan government is being left out of writing the terms of the country's future, posing the dangerous prospect of a rushed and unsustainable peace.

"I'm convinced that if a peace deal is arrived upon only bilaterally, without the Afghan government ... such a deal will be dead in the water," Thomas Ruttig, co-director of Afghanistan Analysts Network, told DW from Kabul. "A deal over the heads of the Afghan population, which fears that their rights, enshrined in the current constitution, might be compromised or sacrificed, might not work."

The quick toppling of the Taliban's fundamentalist regime by US-led coalition forces in 2001, followed by Afghanistan's first democratic presidential elections since 1969 and the subsequent ratification of a Western-style constitution, showed the potential for peace early on in the war.

Swells of confidence, however, quickly deflated. July 2006 saw the Taliban stage an insurgency in the country's south, quintupling suicide attacks within a year's time, according to the Center on Foreign Relations.

This, combined with then-President Hamid Karzai's failure to unify Afghanistan's myriad ethnic groups and provide his people with basic services amid calls of corruption, led to questions about the nation's readiness to eventually take over security duties from coalition forces.

Regardless, Afghan security forces assumed control of security operations in 2014. Those international forces that remained took on a purely training and developmental capacity. Today, 14,000 American troops and 1,200 German and other allied forces remain stationed in Afghanistan.

After the handover, coalition forces' focus split between reconciling the perpetually fractured Afghan political establishment and new threats from Islamic State in Afghanistan, Iraq and Syria. Afghan security forces were left to largely fend for themselves.

Reclaiming village by village in unprotected rural enclaves, the Taliban assumed control of 40 percent of the country, areas in which international aid organizations can no longer operate. Fluid lines of scrimmage make it difficult to determine whether aid will actually reach those in need, or be taxed by insurgent forces, only straining already diminished international aid.

Read more: Western intervention in Afghanistan is a failure

"That's the biggest problem we are facing: There is not a real security line that you can say this part is safe, the other part is not. It's liquid," Thomas ten Boer, Afghanistan country director for Welthungerhilfe, told DW.

Today, the UN estimates that 9.8 million are in dire need of humanitarian assistance — a number that could increase by almost 10 percent by the end of February if paths to affected areas don't open. Poverty has reached 55 percent, and 40 percent of Afghan children are malnourished.

"We can observe that the security situation became much worse over the last years and even months," Conrad Schetter, director of the Bonn International Conservation Center, told DW. "As the government loses control across the country, we see the humanitarian crisis increasing."

Mounting humanitarian and security tensions in Afghanistan have garnered renewed attention from the international community, thanks to Afghan and American-led efforts over the past year to broker a peace deal.

In February 2018, the government of Afghan President Ashraf Ghani offered the Taliban an unconditional seat at the table to hammer out peace accords. The Taliban decidedly swatted away the olive branch, saying it wouldn't negotiate with a government it sees as an American puppet regime.

With US President Donald Trump under pressure at home to end a lengthy and unpopular war, however, the US Special Envoy to Afghanistan Zalmay Khalizad reinvigorated efforts. He met with Taliban representatives in Doha, Qatar, last month to draft a framework for peace; has traversed the globe volleying for support among Western coalition partners; and will return to Doha at the end of February to meet with the Taliban again.

The Americans are offering a withdrawal of foreign troops in Afghanistan in exchange for a ceasefire and guaranteed exclusion of terrorist groups from entering Afghan territory.

"Germany welcomes and supports the new dynamism in efforts for freedom in Afghanistan," the German Federal Foreign Office said in a statement on Wednesday, after having declared its continued deployment of troops and developmental aid in Afghanistan through 2020.

The momentum here is noteworthy but risky, given that the Taliban still refuses to meet with the Afghan government or recognize the regime's values, such as secularism and equal rights for women.

"It's the first time that the Taliban are not only seen through the lens of a terror organization…that's an important step forward," Schetter told DW.

"However, in my perspective, these talks are very hasty," he added. "The talks are following their own set of rules because the Americans want to pull out sooner rather than later." President Trump has said he wants to halve the number of US troops in Afghanistan, though he's given no concrete timeframe.

"The Americans don't care about keeping up democracy, human rights and the like," said Schetter. "This is very clear."

International coalition partners, like the German government, stress that peace is contingent on the Afghan government's involvement in talks: "Afghan responsibility is the only way to sustainable stability in the country," the Federal Foreign Office said.

Given the humanitarian stakes and differing interests within Afghanistan, a peace deal for Afghans by Afghans should be the only option on the table, Welthungerhilfe's ten Boer told DW.

"Only the people of Afghanistan can make the decision for peace — not the US, not the international community," he said. "They must involve the Afghan government. They can't do it without them."