Peace may be an achievable goal in Afghanistan, where the Taliban and government delegates are intensifying talks to reach an agreement. But will Kabul sacrifice women's rights in exchange for peace? 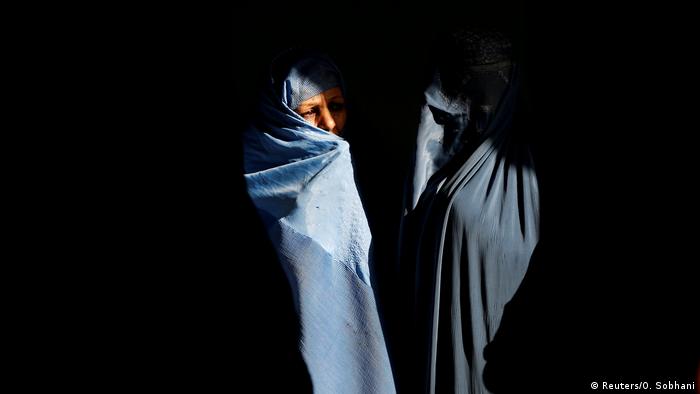 Recently, Zalmay Khalilzad, the US' Afghan representative, said that he had conducted many meetings "with all participating Afghans." The Taliban also confirmed that its members had met him three times this November in Qatar. In the last weeks, the Afghan government and the Taliban also confirmed that they met in the United Arab Emirates. On Sunday, representatives of the Afghan government as well as those from the US and Pakistan spoke with the former rebels, and on Monday Taliban representatives met with their counterparts from Pakistan and Saudi Arabia.

Many influential actors are now pressing for a solution for peace, but how would women's rights look like under an Afghan government with the participation of the Taliban?

Former Taliban member Sayed Akbar Agha has an answer: "I believe that the Taliban wants to guarantee women's rights only within the Sharia [Islamic law]. It will not guarantee them the rights that are being demanded by the West. The Taliban will not allow shamelessness into this country. Something similar exists now already, like common schools for boys and girls. According to me, the Taliban will never accept that."

Abbas Stanikzai, the highest-ranking Taliban representative at the Moscow Afghanistan conference in November, has also made his ideas clear to the press: "If the world expects us to give them [women] the rights, which they have in America or in the West, then I would say that these rights are neither compatible with our tradition and culture nor with our religion. But we will give them the rights that are guaranteed to them by Islam, like the right to education, work or property."

However, it is unclear what the Islamists mean by the rights for women. Women's rights in Afghanistan are also subject to the conditions of the Sharia, which is part of the the country's 2004 constitution. Article 3 of the constitution states that "In Afghanistan … no law is permitted to contradict the instructions of the holy religion of Islam."

Abdulrab Rasul Sayyaf, a former Islamist who worked with mercenary Arab fighters during the Afghan war in the 1980s, has been particularly vocal about including conditions from the Sharia into the constitution and for amnesty to Islamist groups that were active during the civil war in the 1990s.

In this manner, a strong Islamic-oriented coalition made of former Mujahideen (Islamic warriors) leaders could strengthen its position. Without the diplomatic intervention of the US, these groups would have already come to power after the presidential elections of 2014.

These militias include the Harakat-e-Inqelab-e-Islami (the movement for the Islamic revolution), which is led by Mohammad Nabi Mohammadi, who had fought in the ranks with Mullah Omar, the founder of the Taliban.

Women's rights on the back burner

Afghanistan's patriarchal culture and a strict interpretation of Islam have strongly moulded the country in the last four decades. Currently, no one in the inner circle of power is speaking about the women's rights. The reason: nobody wants to endanger a possible peace accord with the Taliban.

But Afghan women are adamant and don't want to relinquish their rights.

Sara Azizi, a 22-year-old woman Kabul resident, says: "If there is a peace pact with the Taliban and the laws are changed such that we lose our freedoms, then I will not accept such a pact."