Afghan migrants trapped at the border between Poland and Belarus | Europe | News and current affairs from around the continent | DW | 25.08.2021

Afghan migrants trapped at the border between Poland and Belarus

A group of migrants from Afghanistan has been stuck at the EU's eastern border for the past two weeks. Belarus and Poland are both refusing to take responsibility for them. 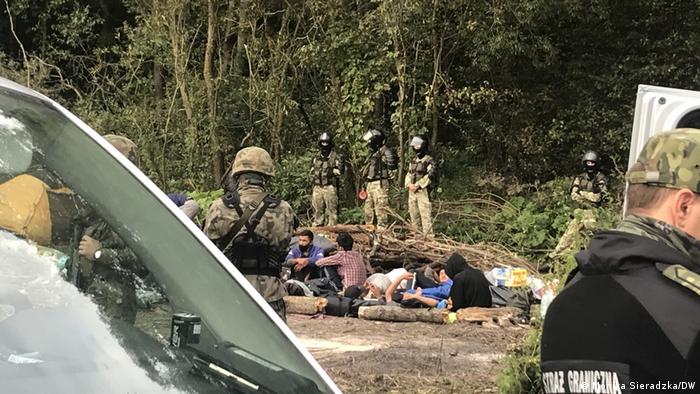 There were originally about 50 people in the group stuck on on the Polish-Belarusian border, but according to the Polish border police, Belarusian border guards have since taken women with small children and some of the men back to Belarus.

As of Monday, there were still about 24 Afghan men and women camping near the border and refusing to be sent back to Belarus, according to the border police. People assisting the migrants say that last week, 22 of them, speaking in English, requested "international protection" in Poland, but the Polish border police ignored their request.

Right now, the refugees are confined to an area of about 30 square meters. Polish border guards keep watch on the Polish side of the border, while the Belarusian side is guarded by armed soldiers wearing helmets and transparent plastic COVID-protection visors. Polish border police vehicles have also been positioned to separate the refugees from journalists, who for the last few days have not been allowed within 200 meters of the migrants.

The Afghans are camping out in the open, with hardly any protection from the heavy rain of recent days. Four women have found shelter in a small tent, brought last week by a Polish member of parliament. There are no toilets. The refugees are sitting, or lying, between uniformed Polish and Belarusian guards who are stopping them from going anywhere.

The precise location of the border at this spot in the forest is not marked. The Polish authorities claim the migrants are on Belarusian soil. Consequently, Prime Minister Mateusz Morawiecki has declared that Poland is not responsible for them, and that Belarus should grant them asylum according to international law.

Belarus's long-term ruler Alexander Lukashenko is playing a "cynical game" "by bringing migrants to the EU's external border," Michal Dworczyk, who heads the Polish prime minister's office, said in an interview with the state broadcaster TVP. "It's about creating chaos," he continued. "What we are seeing here is a very cruel provocation by the Belarusian authorities. They allow people to get as far as the EU's eastern border, then try to push these people out of the country and into the EU."

So is the migrant drama on the Belarusian border really not a Polish problem? Activists from the Polish Ocalenie ["Rescue"] Foundation take a different view. They succeeded a few times in getting food, water and hygiene products to the refugees, but the tougher Polish politicians' statements became, the more tightly the camp in the border area was cordoned off.

The refugee aid workers report that the migrants communicated with signs and gestures that they were hungry and thirsty, and that some of them were sick. "We are here with you, you are not alone," Mathia Golami, an Iranian who lives in Poland, shouted to them in Persian, through a megaphone. She says that when the Afghans tried to respond, the Polish border police drowned them out with the engines of their vehicles. 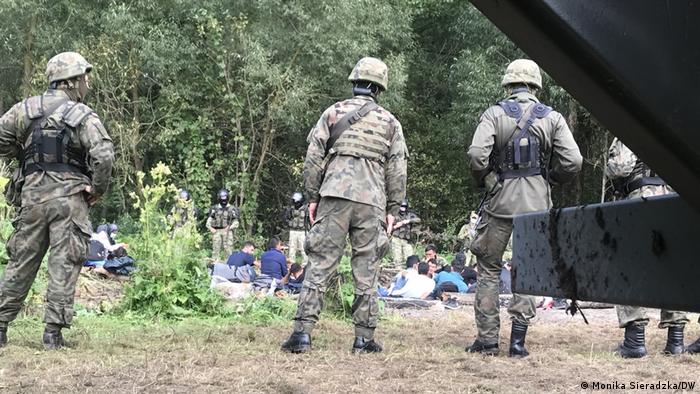 The migrants currently have nowhere to go

Doctor not allowed to see refugees

Paulina Bownik, a doctor and activist, traveled to the border region with a box full of medicine. The Polish border guards wouldn't let her approach the refugees in the forest, either. In protest, she just sat herself down, with her medicine, in a nearby meadow. "It's enough to make you weep!" she tells DW, in despair. "Why won't they let me go to these people in need? Some of them are obviously sick. As a doctor, I'm here to help people. I'm not going to abduct anyone."

The residents of the Polish border village of Usnarz Gorny also disapprove of people being left to languish in the forest, in the open air, without toilets, for weeks on end. "It's disgraceful that they're having to live in such conditions," one villager tells DW. "The dogs in our village have it better." Nonetheless, she opposes allowing the Afghans to come to Poland: "If they let these people in now, thousands will follow," she says. 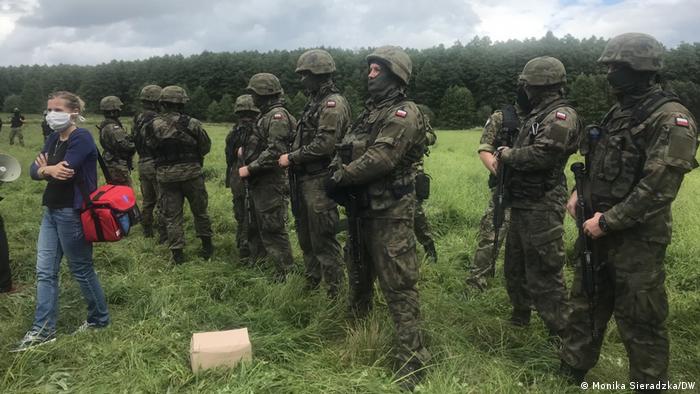 Paulina Bownik, a doctor, (foreground) has been trying to get access to the migrants

Jan Ejsmont also dislikes the idea that people from foreign countries are crossing into Poland over the Belarusian border near his village. "People around here used to leave their doors unlocked, but we'll think twice about doing that now," he says.

Jan's 87-year-old cousin Helena lives alone. "Recently, in a town near here, an Afghan woman walked into a house, looking for food," she tells DW. "The door was open. Imagine coming home to find someone sitting at the table!" 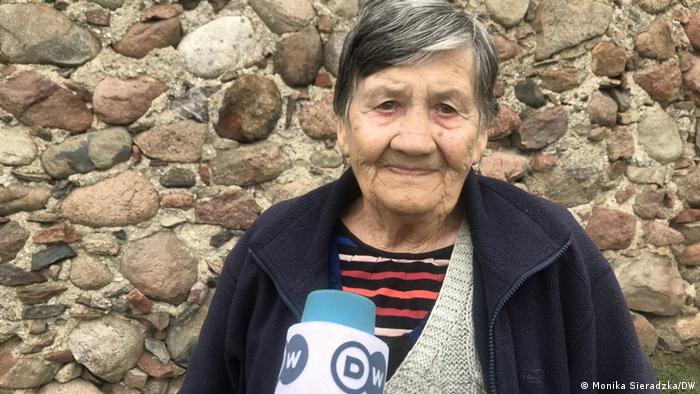 Two young men have come from a neighboring village after seeing a report on television about the migrants in the border region. They think the best thing would be to take the Afghans further west, to the Polish-German border. Refugees don't receive any welfare benefits in Poland; it's just a transit country for these people, anyway, they say.

Multiple violations of the law

However, the lawyer Tadeusz Kolodziej, who visited the migrants at the border on August 20, says the Polish border guards' failure to respond to the Afghans' request for protection is a breach of the UN's Universal Declaration of Human Rights, as well as violating both EU and Polish law. "The regulations are clear," Kolodziej told DW. "The border police are obliged to accept such requests, even in oral form."

The lawyer and his colleagues resubmitted the Afghans' applications, in writing, to the border police in Bialystok, the capital of the region on the Polish side of the border. But here, too, they were rejected. "If you don't allow migrants in, and you treat them so badly, problems arise and that's exactly the scenario Lukashenko is hoping for," comments Kolodziej. Furthermore, he says, the example of this group from Afghanistan clearly shows that Poland, an EU country, is carrying out illegal "pushbacks."

"From previous conversations with these migrants, it appears they had already been in Polish territory before, but were picked up by Polish border guards and transported back to the border with Belarus," Kolodziej reports. Last week, the government in Warsaw approved new provisions in the migration law that speed up the procedures "obliging a foreigner to return," according to the explanatory memorandum. 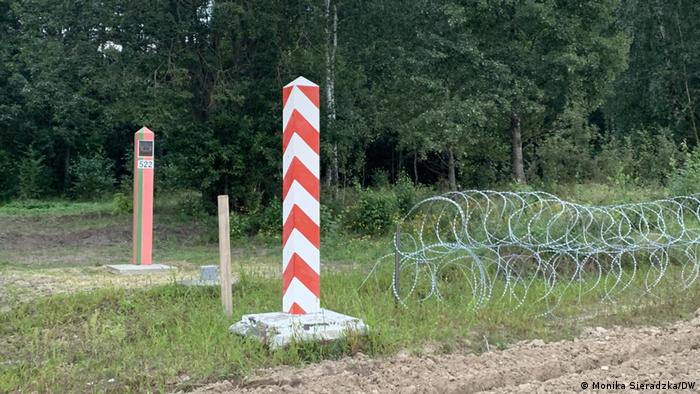 Border guards have been putting up barbed wire at the border. The Polish government has announced plans to build a wall

Among other things, the amendment, which has yet to be approved by parliament, allows applications for international protection to go unacknowledged. This is a contravention of international law.

The Polish daily Gazeta Wyborcza also claims that a "secret" new decree was issued in Poland last week, allowing asylum seekers to be sent back at its borders. Critics say this equates to legalization of pushbacks via the back door.