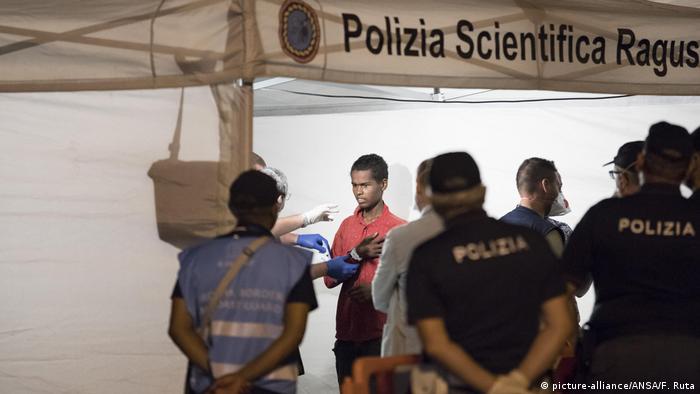 Police check a migrant disembarked from Frontex ship "Protector" at the port of Pozzallo, Sicily

Refugees are increasingly at risk of being forcibly pushed back from European borders, according to a report from the United Nations agency report published on Thursday.

The UNHCR said boat arrivals were being sent back out to the open sea and people who managed to reach the shore were pushed back into their vessels and forced to leave.

What did the UN say?

"UNHCR has received a continuous stream of reports of some European states restricting access to asylum, returning people after they have reached territory or territorial waters, and using violence against them at borders," said the refugee agency's assistant high commissioner for protection, Gillian Triggs.

Triggs did not mention any country by name. However, refugees have reported this kind of behavior in the past by the Greek coastguard.

"The pushbacks are carried out in a violent and apparently systematic way," Triggs said. "Boats carrying refugees are being towed back. People are being rounded up after they land and then pushed back to sea. Many have reported violence and abuse by state forces."

Individuals who have fled across land borders have also been turned away without checks to see if they really need protection, the UNHCR said.

The UNHCR said it had made its concerns clear to European capitals and called for "urgent inquiries into alleged violations and mistreatment."

"Respecting human lives and refugee rights is not a choice, it's a legal and moral obligation," Triggs stressed.

What is the situation like for refugees at the moment?

"With so few arrivals to Europe, this should be a manageable situation," Triggs said. She added that every case needed to be assessed individually under both the UNHCR Refugee Convention and European Union law.

"It is regrettable that the issue of asylum remains politicized and divisive despite such declining numbers."

The UNHCR noted that some countries were carrying a disproportionate responsibility in hosting new arrivals. It urged other European nations and the EU itself to show solidarity by supporting them.

Refugees stuck in hopeless situation at EU border in Bosnia

Tents, mud and cold: Refugees are contending with miserable conditions in Bosnia-Herzegovina as the EU continues to keep its borders closed, Marina Strauss reports from Bihac.