AfD supporters steal the show at Angela Merkel campaign rally | Germany| News and in-depth reporting from Berlin and beyond | DW | 30.08.2017 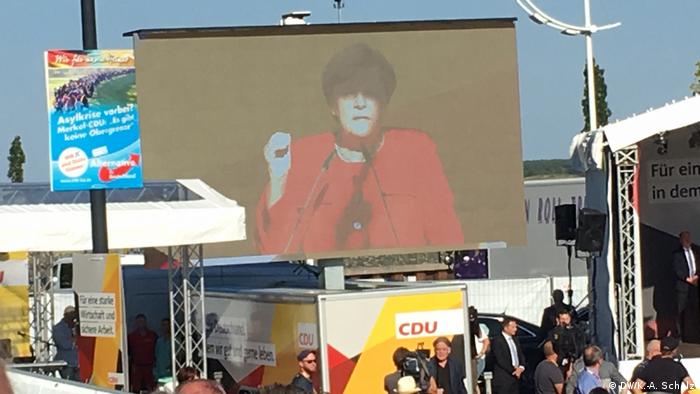 Bitterfeld is one of those German cities that's had - and is still having - a tough time. It continues to bear the scars of the past: destruction during World War II, pollution from its East Germany-era chemical industry complex, mass unemployment since German reunification. On the way to the train station in the city center, senior citizens and refugees populate the market square. There are only a few posters advertising Angela Merkel's campaign rally. Bitterfeld is AfD territory.

One of the area's few success stories is the Goitzsche Lake, which now fills a giant hole left behind by the city's coal mining days. It's been developed with a small marina and smart townhouses boasting lake views. This is where Angela Merkel has come to speak. A live band attempts to create a lighthearted atmosphere hours before her arrival. Her party, the conservative Christian Democratic Union (CDU), has set up stands selling bratwurst and beer. 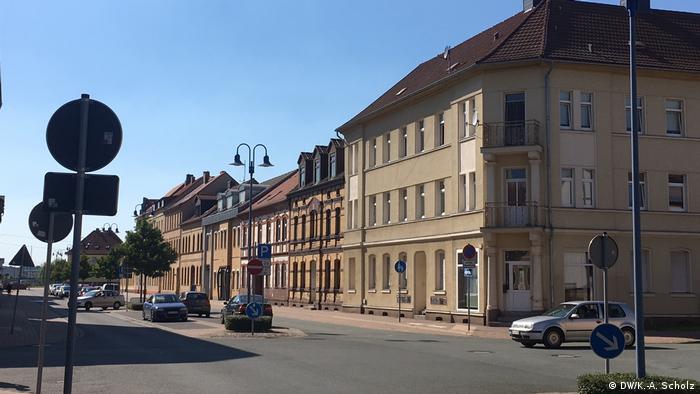 Bitterfeld, a city with a troubled past and high unemployment, is AfD territory

Groups of AfD members have assembled on the outskirts of the event. The right-wing populist party is strongly represented at the state level in Saxony-Anhalt, winning more than 20 percent of the vote in parliamentary elections earlier this year. For days leading up to the event, they were using social media to urge supporters to protest Merkel's appearance with the hashtag #LautgegenMerkel (loud against Merkel). Such protests have been accompanying the chancellor on her campaign stops for weeks. The AfD supporters arrive bearing dual-purpose signs: one side celebrates AfD co-chair Frauke Petry, who came to Bitterfeld a few days ago; the other side features anti-Merkel slogans. 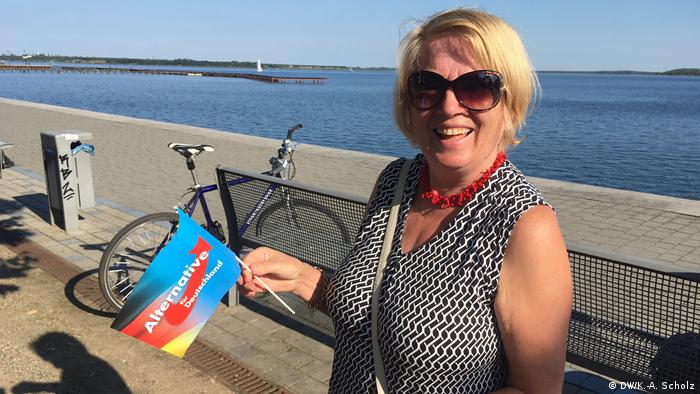 In their midst, an older couple is locking up their bicycles. At first glance, they could be mistaken for CDU voters. But the Krügers are holding AfD flags. It doesn't take much prompting for them to start venting their frustrations. They complain that the money being used to support asylum seekers would be better put to use elsewhere. "Really, the AfD is the new CDU," they say, adding that Merkel has taken her party too far to the left. They say their plan is to observe the gathering in Bitterfeld from afar. But later, Mr. Krüger can be seen standing on a wooden bench in the middle of the AfD group, holding up a red card in protest of Merkel. 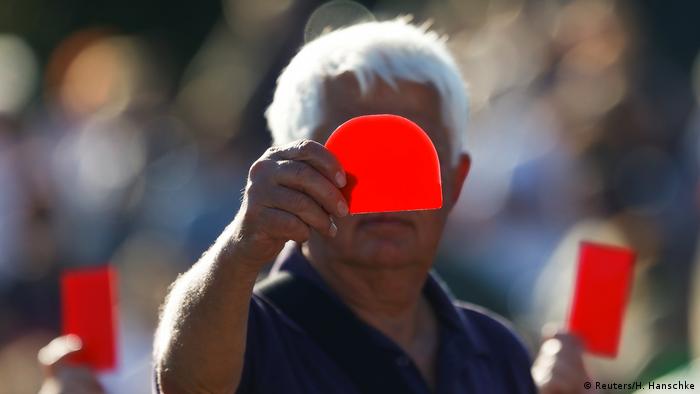 When CDU State Premier Reiner Haseloff takes to the stage to introduce the chancellor, he's greeted by a chorus of boos and heckling that continues throughout Merkel's entire address. Haseloff is visibly annoyed. He gestures to the pleasant surroundings and counters the protesters, saying: "Look, without the CDU, none of this would be here!" He's answered with shouts of "Go home!"

Merkel begins by saying the same thing she always says in such situations: that the majority has come to listen, and she will not be deterred. But here in Bitterfeld, the Merkel fans are in the minority. 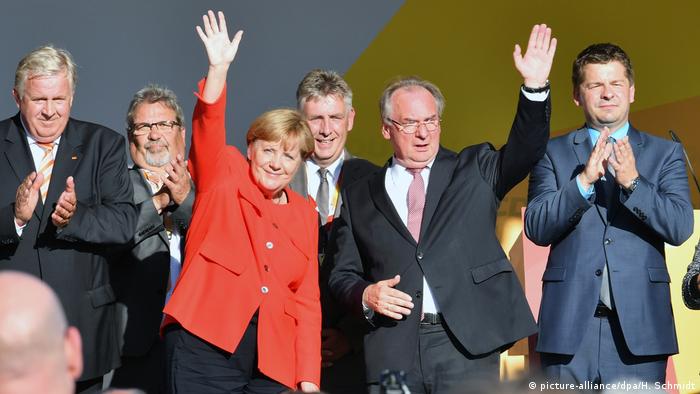 Both Merkel and her CDU colleague, Saxony-Anhalt State Premier Reiner Haseloff, were booed in Bitterfeld

When the chancellor addresses the topic of refugees and thanks those volunteering for that cause for their help, the noise is deafening. Many of the people gathered here resent Merkel for having let refugees into the country - that much is clear from the signs they're holding. There's only a smattering of applause - even when Merkel speaks of her presently more restrictive refugee policy and the new measures being taken to prevent would-be asylum seekers from leaving Africa. Empty campaign promises, says one woman who declines to be named. Asked whether she supports the CDU, she pulls her AfD flag from her bag.

Merkel gamely continues to speak despite the ongoing protest, and does not allow herself to be provoked. The hot sun shines directly in her face; no sign of a cooling gust of wind here. The atmosphere in the crowd also shows no sign of cooling off. Merkel says that her government cut unemployment in half. "Only because people retired!" a man shouts in return. 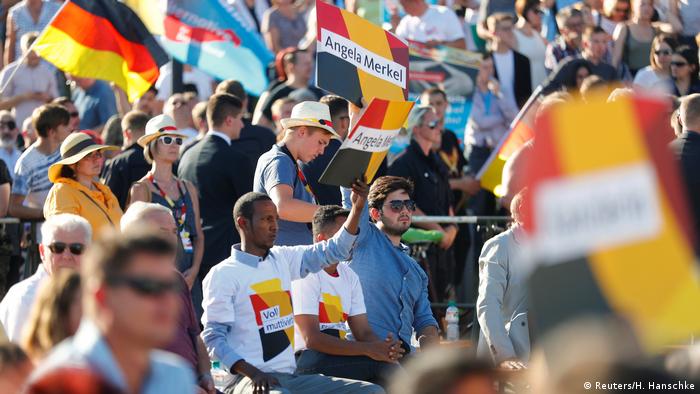 There were Merkel fans present in Bitterfeld, but they were not the most vocal group

A group of young women are applauding enthusiastically for Merkel. They like what she's saying, but think she should have addressed the nationwide lack of teachers, one of the women - a teacher - says. The protesters, she says, are nothing but bullies.

When Merkel announces that she will not enter a coalition with the AfD, there is loud clapping and equally loud booing. The crowd is polarized, and the AfD plays a decisive role. Before her appearance in Bitterfeld, Merkel described a rather relaxed view of the AfD in her traditional summer press conference in Berlin, saying she hoped to withstand the conflict and win back voters who may have turned to the AfD as a sign of protest. But on this evening in Bitterfeld, that strategy doesn't appear to have worked.

Harris Media, a consultant that counts Donald Trump and Britain's right-wing UKIP party as its past clients, is working with Germany's populist AfD party as it seeks election success. A social media blitz is in store. (31.08.2017)