The CEO of the large German firm shared the threat on Twitter, thought to have been sent by neo-Nazi extremists. The email mentions politician Walter Lübcke, whose murder last month was labeled politically motivated. 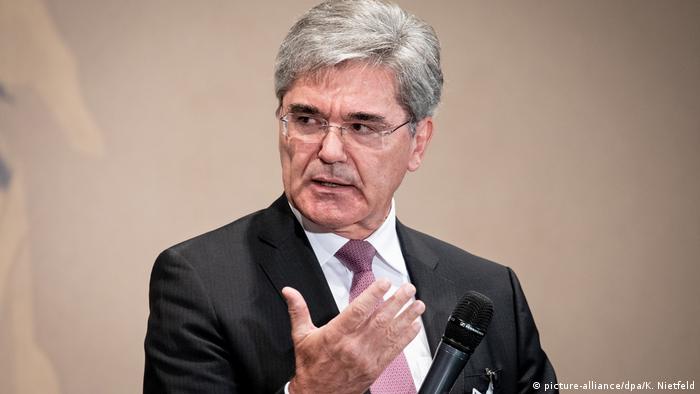 Kaeser, who has led the German industrial giant since 2013, shared a screenshot of an email sent to him from the address adolf.hitler@nsdap.de earlier this month.

Kaeser also alluded to the email address claiming to be that of Adolf Hitler and his NSDAP party, saying: "It seems that digitalization has even arrived in hell. The devil now has email too." He then added: "My reply: #neverforget #NieWieder [NeverAgain] #NazisRaus [NazisOut].

Kaeser only confirmed the threat after the German business magazine Wirtschaftswoche revealed the content of the email and claimed that Siemens had filed a police complaint.

The Siemens boss clarified that the firm had not pressed charges, but said that authorities had begun their own investigation.

Remarks could be behind threat

Despite brushing off the death threat, Kaeser could well have become a target for neo-Nazi anger.

In 2018, following the rise of the far-right Alternative for Germany (AfD), which is now the third largest party in the Bundestag, the Siemens boss accused AfD leader Alice Weidel of "ruining the reputation of our country globally with her nationalism."

The email was also sent to him one day after he had publicly voiced support for Sea Watch captain Carola Rackete's actions in the Mediterranean, while she was in detention in Italy.

The threat against Kaeser follows the killing of German politician Walter Lübcke, who was found dead in his garden on June 2 in what the Federal Prosecutor's Office said was a political assassination linked to neo-Nazi extremism.

Lübcke had become a target of threats for his support for Chancellor Angela Merkel's refugee policies.

Two weeks after the killing, 45-year-old Stephan E. was arrested after DNA evidence matched him to the scene of the crime. He later confessed to Lübcke's murder.

Stephan E. has a string of convictions for violent anti-migrant crime and several German media outlets have uncovered evidence of his connections to the neo-Nazi scene and his own far-right sympathies.

Germany's domestic intelligence agency has repeatedly warned of trouble brewing in the far-right scene. Last month, it said a group of neo-Nazis had compiled a kill-list of political opponents and ordered 200 body bags in preparation for a potential collapse of state order.

The center-right will take a tough stance against any members who suggest a coalition with the nationalist AfD. The CDU called the AfD a party that "tolerates anti-Semitism and racism" and far-right extremism. (24.06.2019)