Abkhazia re-elects president | News and current affairs from Germany and around the world | DW | 14.12.2009

Abkhazia has re-elected its leader for the first time since Russia recognized its independence from Georgia. Russia is one of the few countries that supported the election. 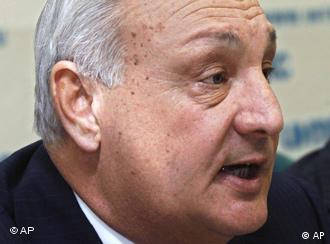 Separatist leader Sergei Bagapsh has won re-election in the rebel Georgian region of Abkhazia, in a vote celebrated by Russia but deemed illegitimate by most of the world.

The first official results, released by Abkahazia's election commission on Sunday, reported that Bagapsh had taken 59.4 percent of Saturday's vote and his main challenger Raul Khajimba had taken 15.4 percent. If these results are confirmed, Bagapsh would win the vote outright, without the need for a run-off.

The final results are expected to be released later this week, though Khajimba told the AFP news agency he would contest them.

"There were irregularities at every polling station," he said. "I will submit a complaint to the Central Election Commission and will also go to court."

This was the first presidential election since Russia recognized Abkahazia's independence from US ally Georgia in August 2008, following a five-day war between Georgia and breakaway region South Ossetia. While Russia did not publically backed a candidate, it supported the election. Georgia has called the vote illegal.

"We have chosen our path, whether the United States likes it or not," said Bagapsh at a press conference," Abkhazia will never again be part of Georgia."

He also vowed to strengthen relations with Moscow, and expressed hope that the two could realize a number of joint economic initiatives, including a possible gas pipeline that would run under the Black Sea from Russia to Abkahazia.

This weekend, the breakaway republic of Abkhazia will hold presidential elections. And while Georgia has slammed the polls as fraudulent, analysts believe the outcome could have far-reaching consequences. (11.12.2009)