Russian Prime Minister Vladimir Putin made a surprise visit to the Georgian breakaway region of Abkhazia Wednesday, calling on the UN to recognize its independence and pledging billions in military support. 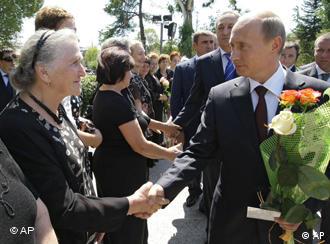 Putin was received enthusiastically by residents of Sukhumi, capital of Abkhazia

Vladimir Putin interrupted his vacation on the Black Sea resort of Sochi to visit Abkhazia, vowing to spend at least 15 to 16 billion rubles (325 to 347 million euros; $461 to $494 million) to build military bases in the separatist Georgian region.

"Russia is showing and will show economic, political and if necessary military support to Abkhazia," Putin said in a news conference in Abkhazia on Wednesday, according to Russia news agencies.

On the first anniversary of that conflict, tensions between Tbilisi and Moscow have been on the rise, raising fears of another armed fight.

"With today's Georgian leadership, you cannot rule anything out," Putin said when asked if there would be a repeat of last year's war.

He said that Russia will work with Abkhazia in building a "modern border defense."

Russia already has several thousand troops in Abkhazia and South Ossetia and military bases in both enclaves.

Putin also urged the UN and the Organization for Security and Cooperation in Europe (OSCE) to recognize Abkhazia's independence. 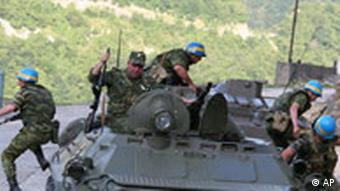 Russia and Georgia were at war for five days last August

But among the world's nations, only Russia and Nicaragua view the two regions as independent from Georgia.

The European Union has said it supports Russia's territorial integrity and last month criticized a visit by Russia's president, Dmitry Medvedev, to South Ossetia. The United States has called for Georgia's sovereignty to be respected.

Both enclaves, however, are heavily dependent on Russia and look to Moscow for guidance. They broke away from Georgian rule after wars in the early 1990s. Pro-Russian billboards dot the streets of Sukhumi, the local capital.

In the conflict-prone Caucasus, concern is mounting about a security vacuum following the end of the UN and OSCE's observer missions. Just 200 EU monitors are left, and they're facing a volatile situation. (29.06.2009)

The ongoing tension between Russia and its neighbors loomed over the annual Organization for Security and Cooperation in Europe (OSCE) ministerial meeting being held in Helsinki. (04.12.2008)