A year after Beirut explosion, parents seek justice for their daughter | Middle East | News and analysis of events in the Arab world | DW | 04.08.2021

A year after Beirut explosion, parents seek justice for their daughter

After their small daughter was killed in Beirut's devastating port explosion, one Lebanese couple are fighting for an explanation — and to get their country back. 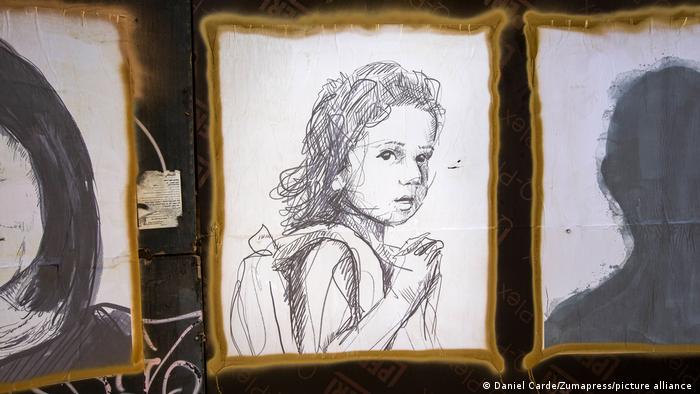 A portrait of Alexandra 'Lexou' Naggear, who was killed in the Beirut port explosion

Paul Naggear and Tracy Awad-Naggear thought they and their 3-year-old daughter would at least be safe at home. It wasn't like they expected much from the state in Lebanon anyway. The economy was in free fall and the COVID-19 pandemic was also impacting the country. Nobody really believed things could get much worse than they were. 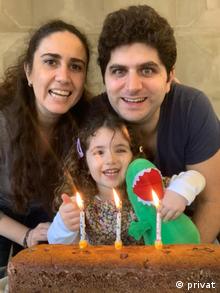 Paul und Tracy Naggear with their 3-year-old daughter, Alexandra, who died as a result of the explosion

But anybody who thought that was proven horribly wrong on August 4, 2020, the date of the devastating explosion in Beirut's port.

A bang, then smoke, then a huge explosion. All of the windows in the Naggear's apartment in the neighborhood of Gemmayzeh, which sits just up the hill from the port, shattered. Both Tracy and the couple's daughter, Alexandra — nicknamed Lexou — were badly injured, and just a few days later, Alexandra died in hospital.

She was one of the youngest victims of the port explosion, in which more than 200 people lost their lives and thousands more were injured.

An estimated 300,000 people lost their homes and many more saw their dreams of a better life disappear when 2,750 metric tons (3,031 US tons) of ammonium nitrate, which had been unsafely stored in port warehouses since 2013, blew up. Experts called it one of the biggest nonnuclear explosions in history.

"We are feeling bad; that's expected," Tracy Awad-Naggear told DW in an online interview. "There's nothing that's making things good. I live in a country where everything is dark. You know, justice isn't leading somewhere for now."

Beirut blast one year on

A lot of locals left Lebanon after the explosion, but the Naggears don't want to leave. However, it was clear from the start that they couldn't rely on the Lebanese judiciary to tell them who was responsible for the explosion, the unsafe storage of the chemicals and thereby also the death of their toddler.

The couple want to see those responsible behind bars eventually. "To make sure that this is not going to happen to any other families or kids or husbands or wives. I want to take back my country that these criminals have taken from me," Awad-Naggear continued, referring to Lebanon's political class and wealthy elites. "They have taken not only my daughter but also my country, my house, my life." 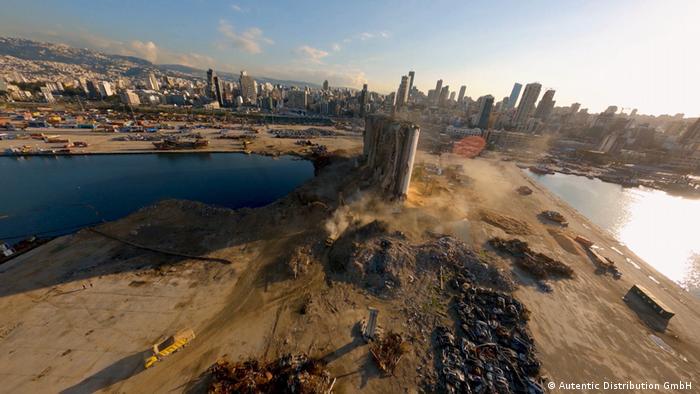 Together with other survivors, their relatives and national and international NGOs, the Naggears are fighting for justice and a proper investigation of the explosion.

Human Rights Watch recently sent a letter to the United Nations Human Rights Council on behalf of all of the victims, calling for an "international, independent and impartial investigative mission."

"We urge you to support this initiative by adopting a resolution establishing such a mission at the Human Rights Council," the letter said. For that to happen, a country needs to bring such a resolution before the Council. However, this has not happened as yet.

It's definitely not an easy fight. So far, the country's political rulers have managed to avoid taking almost any responsibility for the catastrophe, despite the fact that they promised at the time to find those to blame within a matter of days. A whole year has passed without anything significant happening in terms of the investigation into the explosion.

In fact, the opposite has occurred, as Lebanese politicians appear to be trying to hinder any investigation.

In December 2020, after conducting a first probe into the incident, Lebanese judge Fadi Sawan charged several high-ranking politicians, including the sitting Prime Minister Hassan Diab, with criminal negligence. By February of the following year, Sawan's inquiries had been halted and the judge himself suspended from the probe. 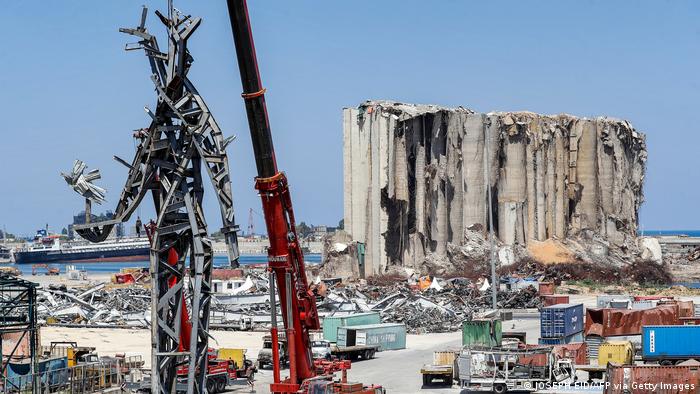 But even for Bitar, it has been tricky. In July this year, acting Interior Minister Mohamed Fahmy denied the judge's request to question Major General Abbas Ibrahim, head of the country's important General Security agency.

Members of the Lebanese Parliament appear to be trying to prevent the questioning of other politicians too. In the meantime, it's become apparent that senior leaders — including the country's President Michael Aoun — knew about the ammonium nitrate at the port and the danger it represented.

But the political elite want to dodge responsibility, said Diana Menhem, head of the Beirut-based organization Kulluna Irada, which advocates for political reform and is funded by Lebanese both inside and outside the country.

"We know that there is a political decision to protect everyone that is concerned with the blast, or to hide the traces of any evidence related to the port blast," Menhem said. "This is a political class that wants to protect itself."

Menhem is not the only one in Lebanon who is sure of this. In general, locals want to see the end of impunity for their political class. A committee made up of the relatives of victims of the explosion is demanding that parliamentary immunity be lifted so that politicians can be more easily questioned on the matter. And it's not just about the port explosion — there are still politically motivated murders that have never been cleared up.

Paul Naggear suggests a solution: He wants all other governments to cut off diplomatic contact with the Lebanese politicians. "From the moment they started obstructing justice, they became high traitors and they should be treated as such," he argued.

In fact, Beirut's deadly port explosion was just one result of decades of mismanagement and corruption in Lebanon. The country currently finds itself mired in a destructive economic crisis with hyperinflation, a currency that is worth less almost every day and shortages of petrol, medications and other important everyday items. Power cuts are almost continuous, and the rate of COVID-19 infections also keeps rising. 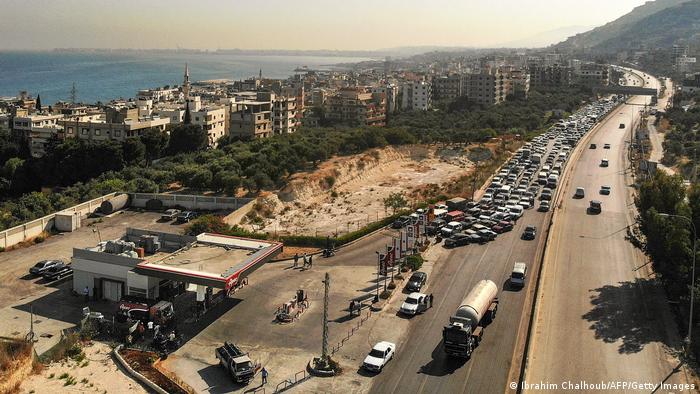 Lebanon is running out of petrol and power

UNICEF, the United Nations Children's Emergency Fund,has warned that almost three-quarters of Lebanese will soon lose access to water as pumping stations are also being hit by the lack of power and spare parts.

Adding to all of these problems is the fact that for around a year, Lebanon has not had a properly functioning government. After former Prime Minister Saad Hariri found it impossible to put together a coalition government for almost year, billionaire telecoms tycoon Najib Mikati was given this task in late July.

Mikati is well-known in the country. He was Lebanon's prime minister between 2011 and 2014. Paul Naggear pointed out that Mikati was in charge when the ammonium nitrate that caused the explosion first arrived in Beirut. In 2019, a state prosecutor charged Mikati of corruption, accusing him of profiting from subsidized housing loans. This is why his recent appointment just seems like more of the same to many ordinary Lebanese.

On Lebanese social media, locals expressed their frustration at Mikati being given this job. "The political class is resisting the formation of a totally independent government," Kulluna Irada's Menhem confirmed. 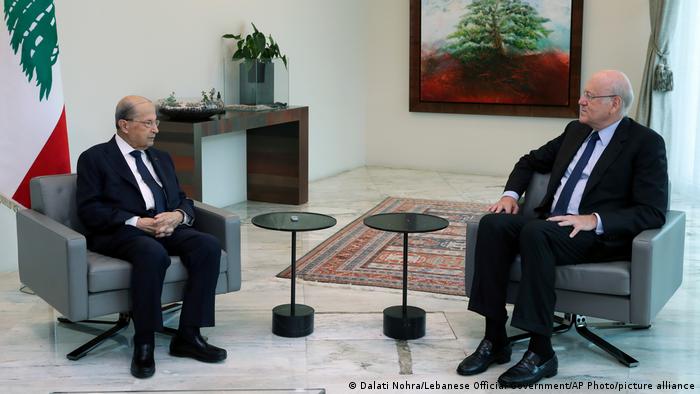 However, the fact that the Naggear family didn't leave Lebanon after the explosion and the tragic death of their daughter has allowed them to take some steps toward achieving their goal of more justice.

Paul Naggear is an engineer, and he ran as a candidate for the council of Beirut's Order of Engineers and Architects (OEA). He won. The syndicate plays an important role in reconstruction in Beirut after the blast, and Naggear's victory is important, even if such a syndicate can't make any laws.

"It gives us the opportunity to block corruption in a very big way because every infrastructure or civil project in Beirut needs to go through the OEA for approval," Naggear explained to DW.

The grieving father's victory is also why the country's next elections, slated for 2022, are essential, Menhem added. It's only if the opposition voices get enough votes that they'll be able to push for a genuine investigation into the port explosion, she noted.

'We will continue this fight'

Before then though, the Naggears plan to continue their fight their own way.

None of the leading politicians in the country has shown them the slightest empathy, even though the acting justice minister has contacted them privately twice, Tracy Awad-Naggear told DW.

As the first anniversary of the port explosion that caused their daughter's death approaches, the Naggears are still feeling the pain of it all. They will be attending one of several marches in Beirut on August 4, which has the slogan "For Justice, for Liberation."

And the couple don't plan to go anywhere until they have found some measure of justice for their daughter, Alexandra, and for the other victims of the explosion.

"We started this fight," Awad-Naggear said. "We will continue this fight. I have a right to justice."

The explosion in Beirut was a shock for Mary Cochrane, a member of Lebanon’s most important aristocratic family. Sursock Palace, where the family lives, was severely damaged in the blast.

As Lebanon struggles to contain COVID-19 infections, the number of people suffering from extreme poverty has tripled in the past year. Some Syrian refugees in the country are embittered enough to return home.

The EU's top diplomats have agreed to create a framework for sanctions against Lebanese politicians. They also approved plans to launch a military training mission in Mozambique.

Lebanon’s economy teetering on the brink of disaster