Two German skiers have been killed by avalanches in western Austria. Thousands of winter tourists remain trapped in major resorts in the Austrian Alps due to heavy snowfall. 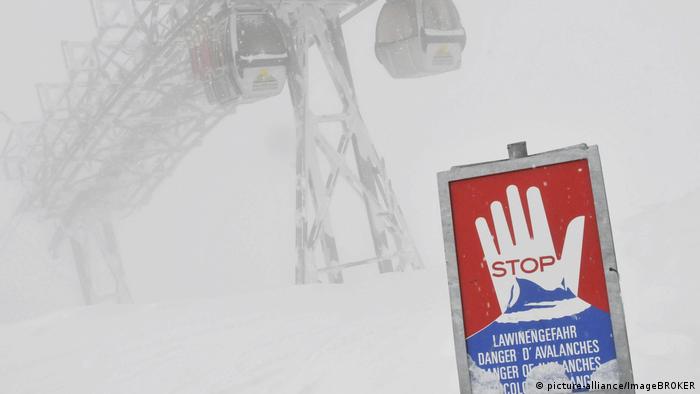 Two German skiers have been killed in separate avalanches in the Alps as heavy snowfall triggered the second-highest avalanche warning level in Bavaria and Austria.

The avalanche danger was assessed as "high," the Bavarian Avalanche Warning Service said after storms dumped a heavy load of snow on the northern side of the Alps over the weekend.

"The main problem is the enormous weight of new snow on the unstable old snow cover," the Bavarian service said.

Despite the risks, two skiers ventured off-piste and were buried in two separate avalanches in the western Austrian province of Vorarlberg. Rescuers were able to dig out the two German men but were unable to save them.

In a separate incident, a Swiss snowboarder was killed when she got stuck head first in deep snow after veering out of bounds.

Frosty Bavaria
The strong winter storm that struck Bavaria on Saturday left thousands of people stranded in resorts, clogged roads and forced the cancellation of 120 flights in Munich.

In the past several days, the storm has dumped more than 1 meter (3.3 feet) of fresh snow in the alpine region. Meteorologists expect the snowfall to continue in southern Bavaria and the Alps through Sunday and into Monday night.

As the new snow settles and weather conditions become more favorable, the threat of avalanches should also decrease.

Thousands of vacationers have been stranded in ski resorts in the northern Alps, with many reportedly trapped in the town of Leogang, east of the city of Innsbruck, and in the Obertauern resort, south of Salzburg.

In Leogang, hundreds of rail passengers attempting to leave the area faced a four-hour delay Sunday morning due to a fallen tree on the tracks, while avalanche warnings forced the closure of Obertauern's access road.

Authorities have warned residents in the towns of Kufstein, on the Austrian-German border, and nearby Kitzbühel, to avoid winter hikes due to the danger of falling trees.

Falling branches have damaged power lines in the states of Lower Austria and Upper Austria, leaving some 14,000 households without electricity.