A father and his daughter were killed when an avalanche swept them away while they were skiing in the French Alps. Two other skiers have been rescued in the Swiss Alps near the French boarder after a different avalanche. 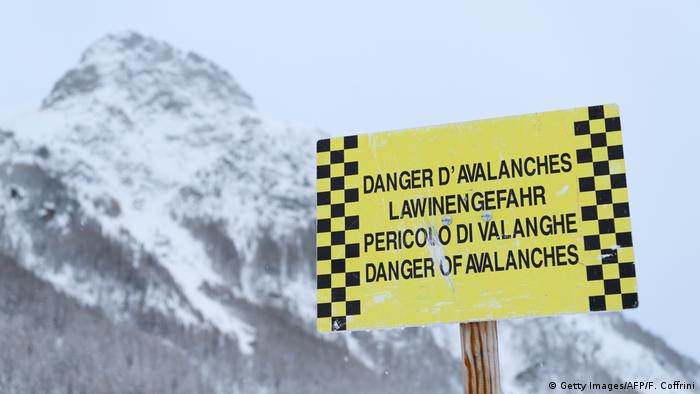 A 43-year-old man and his 11-year-old daughter were found dead in in the French Alps early Sunday afternoon after two people were injured by a separate avalanche in Switzerland.

The French pair had been skiing at the Val-d'Isere ski resort in France near the Italian border. Local newspaper Le Dauphine said they had been skiing in an area closed off due to the avalanche risk. The exact circumstances of the accident were not yet known, and prosecutors in nearby Albertville have opened an investigation.

Two other skiers were rescued on Sunday with minor injuries after an avalanche took place at an altitude of 2,500 meters (8,202 feet) on a mountain ridge called the Col de Fenestral in the Finhaut region of the Canton of Valais, near the Swiss-French border.

Police had originally reported 10 skiers to be missing but revised that down to two.

"There was a group of ten skiers at the moment of the avalanche near the snow which broke away," police spokesman Steve Leger said. "The person who gave the alert thought they had all been carried off." In fact they were reported to be safe.

"The rescue team has found the two injured walkers and taken them to hospital," he said.

Switzerland has been witnessing heavy snowfall in the past few weeks, prompting authorities to issue high-level avalanche warnings of 3 out of a maximum 5 which is defined as a "critical avalanche situation."

Several other avalanches occured Sunday and police called for caution, especially from any skiers tempted to move off the marked pistes.  A cross-country skier was also killed in an off-piste area near the Giettaz-en-Aravis ski resort.

The bodies of two German nationals caught in an avalanche in Austria on Friday have been recovered. The two men, aged 25 and 26, were skiing off piste when they were killed by a sliding wall of snow. (06.01.2018)

The late-season avalanche hit the cross-country skiers as they walked up towards a summit. It is unclear how the snow became dislodged and swept them away. (09.05.2017)

Authorities have begun airlifting stranded tourists by helicopter after road and rail links to Zermatt were cut off. At least 80 centimeters of snow dropped on the town over 24 hours. (09.01.2018)