109 US service members were injured in the Iran missile attack

The US had downplayed the effects of an Iranian attack on a US airbase in Iraq in an apparent bid to defuse tensions. However, the Pentagon has now admitted 109 service members suffered brain injuries. 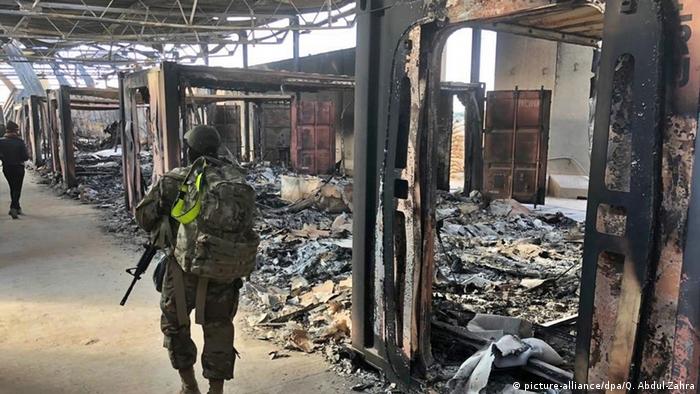 The US Defense Department admitted on Monday that 109 service members suffered mild traumatic brain injuries in an Iranian attack on a US airbase in Iraq in January.

President Donald Trump had initially denied there were any casualties in the ballistic missile attack, which came in response to the US assasination of Revolutionary Guard general Qassem Soleimani.

In the weeks after the attack, Washington admitted that some troops had suffered mild traumatic brain injuries, but the latest figures are significantly higher than previously reported.

The Pentagon said that 76 of those service members had already returned to duty, while the rest are still undergoing treatment.

"Our research has been instrumental in the development of various breakthroughs to improve the lives of those individuals who have sustained brain injuries," Pentagon press secretary Alyssa Farah said in a statement. "Our efforts must address the total picture — before, during and after any blast exposure or injury. This is a snapshot in time and numbers can change. We will continue to provide updates as they become available," she said.

Trump's initial downplay of their injuries as "not very serious" prompted rebuke from US veterans groups. "I heard that they had headaches and a couple of other things," Trump said at a news conference on January 22. "I don’t consider them very serious injuries relative to other injuries I have seen."

Frank Luntz, a Republican strategist, said on Twitter: “We shouldn’t hide our veterans’ injuries just to pretend like we’re invincible”.

The Veterans of Foreign Wars organization also issued a statement last month, condemning Trump's comments about the injuries. "TBI [traumatic brain injury]is a serious injury and one that cannot be taken lightly. TBI is known to cause depression, memory loss, severe headaches, dizziness and fatigue — all injuries that come with both short- and long-term effects," said the group's national commander, William "Doc" Schmitz.

"The VFW expects an apology from the President to our service men and women for his misguided remarks ... Our warriors require our full support more than ever in this challenging environment," he added.

The appearance of the supreme leader at Friday prayers comes at a tumultuous time for Iran, which had seemed on the brink of war with the US. The last time he led the sermon was in 2012 when he threatened Israel. (17.01.2020)

Masih Alinejad was the target of a possible assassination attempt, it has been revealed. Iranian spies had tried and failed to kidnap her in 2021.