At celebrations marking 100 years of women's suffrage, German Chancellor Angela Merkel has warned against setbacks in women's rights. The fact Germany has a female chancellor "must not be an alibi" for shortcomings. 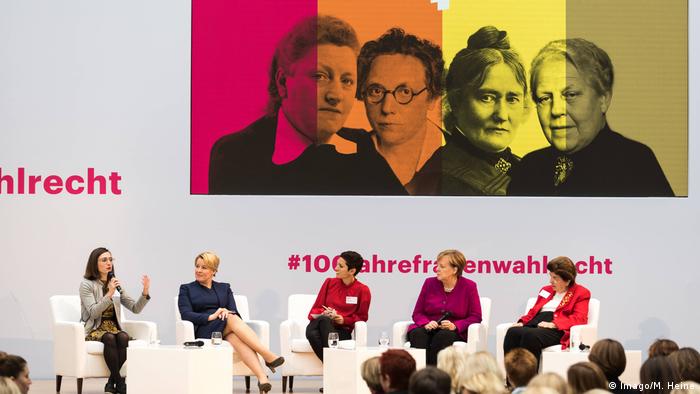 "Today, no one will laugh when a little girl says she wants to be a minister or the German chancellor," said Angela Merkel in Berlin on Monday.

"I even hear that some children wonder if a man can be chancellor," she added to laughter. Of course, it's true; an entire generation of Germans has never known any other chancellor except Merkel.

'What are you fighting for?'

In every corner of the courtyard at the German history museum, the images of some of Germany's leading, and yet widely forgotten, suffragettes — Elisabeth Selbert, Marie Juchacz, Helene Lange and Helene Weber — watched over the centenary celebrations on Monday. Accompanied by the slogan of the Women Ministry's nationwide campaign, "What are you fighting for?", the images acted as a reminder that while much has been achieved in the last century for women's rights, much remains to be done.

"The goal is parity between women and men in all areas of society," Merkel said. With a female chancellor at the helm, many onlookers would be forgiven for thinking of Germany as a pioneer in gender equality. But after 13 years in office, even Merkel appeared to admit on Monday that her advocacy of women's rights has left much to be desired.

"One swallow doesn't make a summer," she said. "The fact that I exist mustn't be an alibi."


At the same time, Merkel also stressed that despite progress, "setbacks cannot be afforded." Such is this case in Germany's parliament, which after the September 2017 federal elections saw the percentage of women in the Bundestag plummet to a 20-year low of less than 31 percent. Women also remain a minority in every single one of Germany's 16 state parliaments and only 18 percent of Germany's mayors are women.

The same shortcomings ring true, too, outside of politics, with women still fighting to overcome obstacles to leadership positions and the national gender pay gap still at 21 percent.

'Women are capable of anything'

Social Democrat and Family and Women's Minister Franziska Giffey is among the 219 women in the Bundestag. 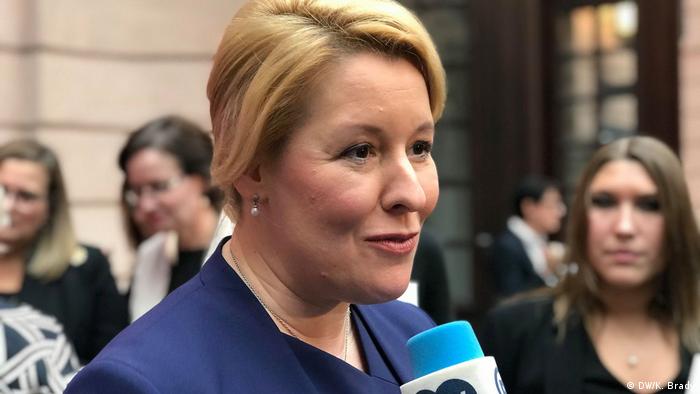 'Women's suffrage is great, but it's not enough,' said German Family and Women's Minister Franziska Giffey

Addressing the 350 guests at Monday’s celebrations — the majority of whom were women — Giffey made it clear that Germany still has a long way to go in gender quality.

"Even today, women must continue to fight: for equal pay for equal work, for the combatability of family and career, for the upgrading of social professions and for protection against violence."

"Women are capable of anything," said Giffey. "The fight for more women's rights continues."