"Knowledge of German literature in the US can certainly be expanded," said DW reporter David Levitz Thursday at the Frankfurt Book Fair event launching the project 100 German Must-Reads.

Levitz and his German colleague, DW literature editor Sabine Kieselbach, introduced the bilingual literary multimedia project at the book fair. In the project, the two hosts summarize each book in short, entertaining videos, making the main idea of the book accessible.

Author Jenny Erpenbeck, whose novel Visitation is listed among the 100 must-reads, was also a guest at the discussion that launched the new project.

Kieselbach pointed out that Erpenbeck was one of the only German authors whose works have almost all been translated into English — something which is also the case for literary greats such as Thomas Mann.

That was one of the first criteria for selecting books for the list. Many renowned German novelists might have only one title available in English, while others simply couldn't be included since their works only exist in the original German.

Project visitors might notice that literary giants such as Johann Wolfgang von Goethe are also missing among the 100 recommendations. The reason is simple: All selected novels were published in the 20th and 21st centuries. Hate mail complaining that Goethe wasn't on the list is still to come, quipped Levitz. 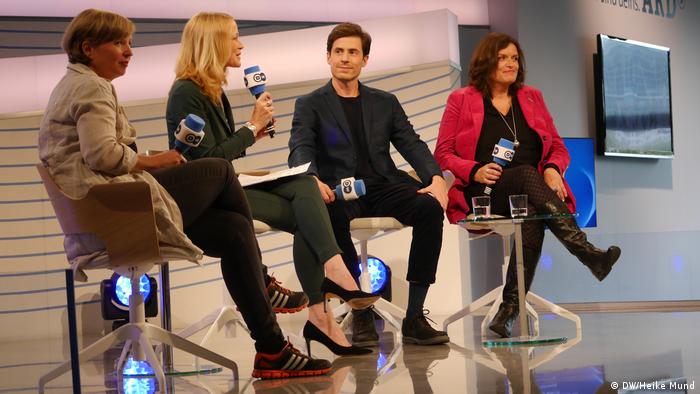 From left to right, guest author Jenny Erpenbeck, TV host Karin Helmstedt, and the two DW hosts of the series' videos, David Levitz and Sabine Kieselbach at the launch in Frankfurt

Another topic that was broadly discussed during the panel in Frankfurt was the importance of the Nazi era and the Holocaust in the selected German works.

Kieselbach pointed out that the issues that would lead to World War II had already been addressed in novels that were written before it even started, citing for example The Oppermanns by Lion Feuchtwanger. The novel portraying anti-Semitism and the rising Nazi party was published in 1933, which is the year Hitler took power in Germany. "Feuchtwanger was a literary visionary," said Kieselbach.

History remains a literary theme in many of the selected books published after 1945 as well, with works covering post-war history of West and East Germany or the fall of the Berlin Wall, among other things. Even some of the most recent novels, such as Katja Petrowskaja's Maybe Esther (2014), deal with aspects of the Holocaust and Germany's past. History never stops being a topic, Kieselbach said.

Jenny Erpenbeck's novel Visitation brings together 12 characters who she uses to cover the major historical events of Germany's 20th century history. The author pointed out that only one of those stories reflects her own biographical background, as she aims to go beyond her personal story when she writes.

For DW's Levitz, the "external perspective" on history and German society was also particularly important. Born in Florida, the reporter has been living in Germany in 2010. He believes that whoever "reads through this list will develop a different understanding of Germany and Europe." The books offer deep insights into European history, he added.

The panel also discussed how the 100 selected books don't just focus on the country's dark history but also feature humor. All participants of the discussion agreed that German novelists can be funny and humorous, despite widespread cliches against this.

The panel agreed that German humor is not necessarily loud and in-your-face, but is rather a subtle and quiet one that finds its place in the background. Titles as varied as Wolfgang Herrndorf's Why We Took The Car  (2010) or Jurek Becker's Jakob the Liar (1969) were cited as good places to start discovering this particular form of humor.

'Why We Took the Car' by Wolfgang Herrndorf

'Why We Took the Car' by Wolfgang Herrndorf

Not much could be done to fight the fact that female authors only make up about 30 percent of the list, the DW presenters said. "Especially for the first 70 to 80 years of the 20th century," there simply weren't that many women who were published, Kieselbach said, adding that the list can continue to grow in the future.

For now, the 100 recommendations offer a unique list of works that were first written in German and that are also available to English readers.

The German book market: Between crisis and hope

The book branch is in a crisis as fewer people are reading print and younger generations are turning to their smartphone. A look at the facts that show developments in Germany's book industry. (09.10.2018)