The book branch is in a crisis as fewer people are reading print and younger generations are turning to their smartphone. A look at the facts that show developments in Germany's book industry. 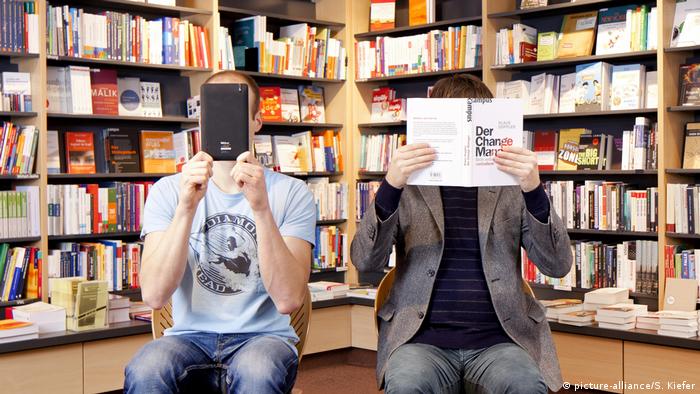 Sales: How healthy is the German book market?

It depends on your perspective on the figures. Facts may not lie but they do need to be looked at in context.

If we look at the latest sales figures for 2018, published by the trade magazine Buchreport on Thursday, we see a decrease of 2.3 percent compared to the previous year. The average price of books also increased by 1.7 percent.

According to the 2018 report of the "Börsenverein des Deutschen Buchhandels" (Association of German Book Trade), total sales for 2017 were €9.1 billion ($10.4 billion) — which is still a healthy sum.

That's especially the case if viewed in comparison: The music industry recorded €1.6 billion in sales, computer and video games €2.4 billion and the film industry €2.9 billion.

The devil lies in the details, however. Sales figures don't reveal too much about the reading behavior of Germans, who are reading less, according to some studies. And most of all, they are reading fewer books. The digital competition has made itself known here. The classical book-in-print is just one element in the strong sales figures. 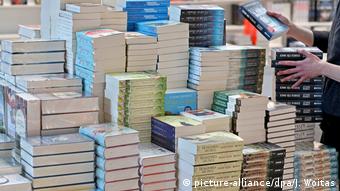 Remainders tables can reveal the state of the market

Overflowing with titles: How many books will be released?

Exactly 82,636 titles were released in 2017. A decade ago, that figure was around 95,000. A steep decline. Nevertheless, you might be asking: With so many titles, who has time to read them all?

Again, the devil is in the details.

One could even put a positive spin on things and consider that even more titles are being produced than the 82,636 figure reveals, as e-books and print-on-demand productions are only recorded to a small extent. And the numbers of first editions don't look too bad either, as there is only a slight decrease.

But the minuses become particularly evident in backlist titles, as an increasing number of books are not being reissued, something already clearly visible in bookstores across Germany. While a few bestsellers rack up high sales, other titles which have not made it to the best-seller lists need to be specially ordered if a  customer wants to read them.

Books and accessories: What are readers buying?

Hardcover editions are still the most popular purchase. This could also serve as an explanation for the fact that sales figures only fell slightly overall, even though Germans today are reading fewer books: As bound books increase in price, sales figures are driven up even if fewer books are sold.

Sales of paperbacks are still on the decline. What was once a popular format is now suffering the effects of digital competition, according to experts. That is especially true of entertaining reads with a short shelf life.

And while there is still no uniform view of what the audiobook segment looks like, sales figures there seem to be on the decline. Yet people are listening to literature directly via downloads and streaming services, numbers which are not included in the statistics. 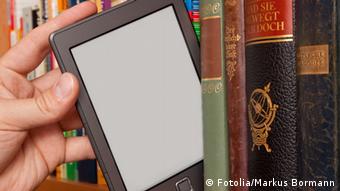 The optimistic predictions for the future of the e-book from around a decade ago have already been shattered. E-books may be read and bought in Germany, but they have not replaced the classical print book.

Their share of sales in the 2017 book market was only 4.6 percent. Although that proportion is higher than in previous years, the growth curve has hardly grown steeper.

Even as more and more people are reading e-books, they are getting cheaper so sales are hardly increasing. Overall, it is also true that, "Rapid growth rates have long been a thing of the past; the loss of potential buyers for the book market as a whole affects the e-book as well," according to the latest report by the Association of German Book Trade.

Novels, thrillers, science fiction: What do readers enjoy reading most?

And what are those (remaining) readers reading?

They are still fond of fiction, making up 31.9 percent of total sales in the German book trade. Of this, "narrative literature," or books without a specific genre, leads by far. Coming in second is the suspense novel or thriller, which saw a surprising slight decline. That was followed by the comic, cartoon, humor and satire category, gift books and then sci-fi and fantasy.

Besides fiction, children's literature and books for young adults landed second, followed by the self-help books which appear to be gaining in importance. The only group to have recorded an increase in sales last year was textbooks. Nonfiction books rounded out the numbers. 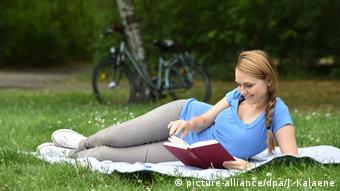 Women read more than men do

The readers: An unknown species?

Who, then, is still reading? The statistics are sobering. "All in all, the book market lost 6.4 million buyers between 2013 and 2017," reports the Association of German Book Trade.

Yet in the ranking of Germans' favorite pastimes, reading climbed from rank 14 to 13 — only because gardening was less popular. This is of course only a small consolation. People still prefer watching television, listening to the radio and surfing the internet. There is less and less time to read books. For men even more so than women.

Books and literature: An export hit?

And what about German literature abroad? Are there strong sales of German books to be found in the big, wide English-speaking world? Not at all. As far as the licensing business is concerned, the English-speaking countries are not even in the top 10.

China has claimed the top spot for years. In 2017, for the first time, Turkey is in second place. Spain, the Czech Republic, France, Italy, Russia and the Netherlands follow.

To put the whole thing into perspective, it's good to note that exactly 7,856 works "Made in Germany" found their way into non-German languages in 2017.

In the US and Great Britain, there simply is not enough interest in German books. At least in this area Donald Trump does not have to be afraid of the German export economy.

Read more:How a Highlands publisher has hit the big time with 'Babylon Berlin' 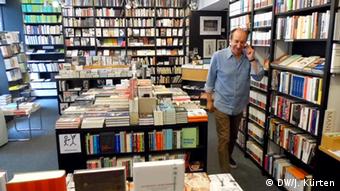 Small bookstores are struggling but are supported by politicians

The bookstore: An endangered species?

There is a lot of talk about the book trade being in crisis. Are bookstores a dying species? In some areas, yes, but not all.

The brick-and-mortar bookstore is still by far the most important distribution channel for books (€4.3 billion). But you don't have to be a professional to know the Internet book trade has taken an increasingly larger share of the pie. And it's not just Amazon, although the Americans are clearly dominant in the market.

Yet bookstores can be assured of political support. "A city without a bookstore has lost part of its soul," said one high-ranking politician at the Berlin Book Days. And Minister of State for Culture Monika Grütters is supporting small businesses with the German Bookstore Award.

Looking at numbers and statistics, you could become pessimistic about the future of the book trade. Still, given the fact that there are so many new titles published every year, the book industry is certainly not one that is about to disappear.

Georgia is the guest of honor at the 2018 Frankfurt Book Fair. The small Caucasus republic presents richly diverse literature. (08.10.2018)

Hundreds of poor children now have access to books and computers because of a new library in Ajegunle in the heart of Lagos. It's a small ray of hope for some of the kids who were forced out of school because of COVID.