The widow of Nobel Peace Prize winner Liu Xiaobo moved to Berlin in July after years of house arrest in China. In a picture tweeted by exiled Chinese writer Liao Yiwu, she can be seen enjoying a glass of German beer. 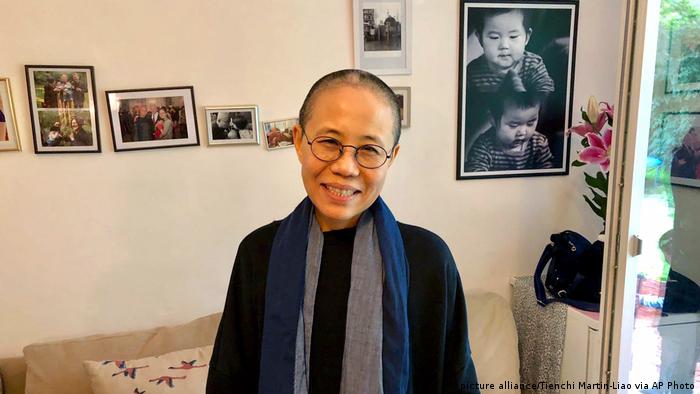 "The strength of her medicines has been reduced. She can now handle walking up to 3 kilometers a day — this was virtually impossible last month," the newspaper quoted her younger brother, Liu Hui, as saying.

Liu Hui, who is not allowed to leave China, told the newspaper that his sister was still undergoing detailed physical examinations.

"She likes the weather, but she is still taking to adjust to the German diet," he was quoted as saying. "But overall, her life has stabilized."

The newspaper said Liu Xia was deliberately keeping a low profile in Berlin out of concern for her brother in China, who is out on parole after being sentenced to an 11-year jail term for fraud in 2013.

"I do plan on visiting her, but I will still have to fight for it in the time to come," Liu Hui told the South China Morning Post.

Liu Xia is slowly settling in to her new home in the German capital in the company of friends and allies who campaigned for her release.

Exiled Chinese writer Liao Yiwu, one of Liu Xia's close fiends, tweeted a photograph of her enjoying a glass of German beer. The picture was captioned "Ich bin ein Berliner," German for "I am a Berliner," echoing the famous words of former US President John F. Kennedy spoken in 1963 during his visit to then-West Germany.

Liu Xia, a poet and artist, was put under house arrest in 2010, days after her imprisoned husband, Liu Xiaobo, was awarded the Nobel Peace Prize.

He had been sentenced to 11 years in prison on charges of inciting subversion of state power.

Liu Xiaobo died of liver cancer last July aged 61. He was a writer, critic and activist who called for political reforms and an end to one-party rule in China.

The life and struggle of Liu Xia, widow of Chinese dissident Liu Xiaobo

After years of living under house arrest, Liu Xia, the widow of late Chinese Nobel laureate Liu Xiaobo, was finally set free by the Chinese government. She has now left China, leaving behind a painful history. (10.07.2018)

Chinese dissident Liu Xia's arrival in Germany: 'A gift to the German government'

A former German president and Nobel laureate gathered in Berlin to commemorate Chinese activist Liu Xiaobo, who died in detention a year ago. His widow Liu Xia traveled to Germany this week. (14.07.2018)