Secular bloggers risk their lives by speaking out, opponents of the government disappear without trace, the Hindu minority is under attack: In Bangladesh headlines are dominated by violence. 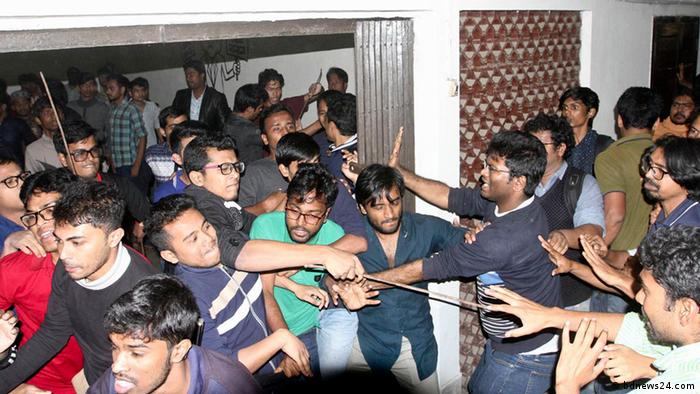 The country that wants to reconcile democracy and Islam appears to be finding it harder and harder to strike a balance between the two.

Bangladesh was born in blood. The Bangladeshi government claims some three million people were killed during the 1971 war of liberation, though independent figures vary greatly. While Pakistan has remained an Islamic republic, Bangladesh made secularism a founding principle in the republic’s constitution. But conflict between Islamist and secular forces has plagued the country since its formation - and has a major impact on how it is perceived abroad.

Annual economic growth has been at well over five percent for a decade; inward investment is flowing. Bangladesh is one of the world’s leading producers of garments and textiles. The government in Dhaka is keen to attract foreign cash. That fixation with inward investment also helps explain the refusal on the part of the political elite to recognize the growth of violent Islamism in the country.

In 2016, Bangladesh experienced its worst terrorist attack to date. In the heart of the capital’s diplomatic quarter, terrorists murdered 20 people they’d taken hostage in a popular café, among them 18 foreigners. So-called Islamic State claimed responsibility for the attack, but the Bangladeshi government continues to deny that there are IS or Al-Qaeda cells in the country.

The political landscape is currently shaped by the personal animosity between the two most powerful women in Bangladesh: Sheikh Hasina, who heads the Awami League, and Khaleda Zia from the Bangladesh Nationalist Party. When one of them holds the reins of power, the other regularly does all she can to bring government grinding to a halt by having the opposition dig in its heels. In a further twist to this tale Ms. Zia was sentenced to five years in jail early February 2018, charged with misusing charitable funds.  Ms. Zia is also currently barred from taking part in parliamentary polls.

The daughter of the country’s founding father Sheikh Mujibur Rahman, Sheikh Hasina has led the Bangladeshi government since 2009. She views herself as a mediator between secular and Islamist forces. But the brutal murder of bloggers critical of religion and the continuing restriction of democratic freedoms show how this balancing act is teetering - and could soon tip into disaster.