The deal, brokered by the United Nations, was more than two years in the making. It's being hailed as "an important step," raising hopes that the country's stalled peace process can be revived. 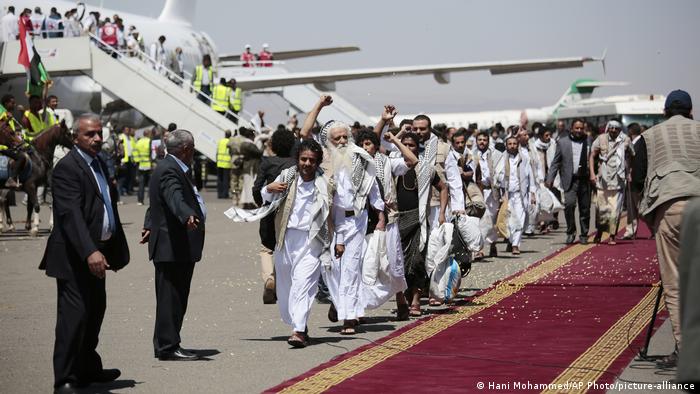 Opposing sides in Yemen's ongoing conflict completed a UN-brokered prisoner exchange on Friday, the largest such swap in the five-year conflict.

More than 1,000 prisoners were released and taken back to their homes over the two-day exchange between the Houthi rebels, who are supported by Iran, and the Saudi-backed government in Yemen. The Houthis said 671 prisoners arrived in the rebel-held capital, Sanaa, during the operation.

The prisoner release was nearly two years in the making after both sides initially agreed to a large swap in December 2018 as part of the UN-sponsored Stockholm Agreement. The deal was finalized last month following talks in Switzerland.

The UN leader urged the two sides to "finalize the joint declaration, consisting of a nationwide cease-fire, economic and humanitarian measures, as well as the resumption of a comprehensive, inclusive political process to end the war," according to a statement from his spokesman.

UN special envoy to Yemen Martin Griffiths told the UN Security Council on Thursday that the prisoner exchange was "an airlift of hope."

The International Committee of the Red Cross (ICRC) oversaw the exchange. The prisoners were transported on 11 flights, which took off or landed in five different cities: Sanaa, Seiyun and Aden in Yemen; and Riyadh and Abha in Saudi Arabia.

"We can say that this was a really successful conclusion," Katharina Ritz, head of the ICRC's Yemen delegation, told the German press agency dpa.

"Hopefully this is the beginning. There are several thousands still in prison and families waiting for them," she added.

Red carpet treatment for some

Some returning detainees were met with celebration. In Sanaa, Houthi-run al-Masirah TV showed freed prisoners receiving a heroes welcome. They were dressed in traditional white robes, and stepped out onto a red carpet where they were greeted by throngs of officials, aid workers and relatives. 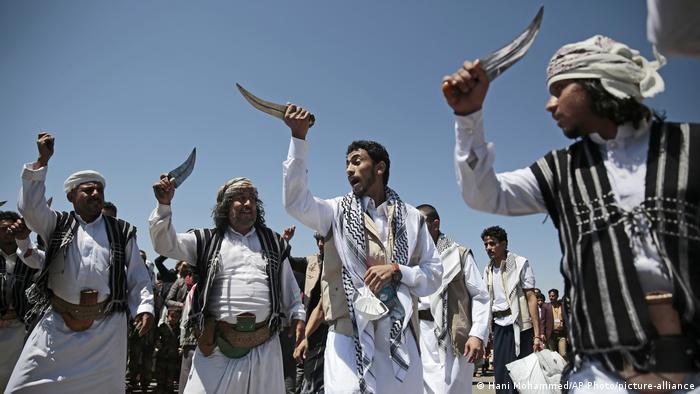 The freed prisoners celebrated their freedom with songs and dances

Prisoners were seen kissing the carpet while dancing broke out around them. Ahmed Hamed, a Houthi leader, promised cash for the recently freed prisoners and said authorities would help all unmarried men cover their wedding expenses.

"We will not abandon our prisoners or forget them," said Abdel Qader Mortada, the head of the Houthi Committee for Prisoners Affairs, who added that Houthis were looking to sign another UN-mediated agreement to free more captives.

The first prisoners who arrived in the Yemeni city of Aden were captured along the country's western coastline during fierce battles around the strategic city of Hodeidah, according to the city's prisoner reception committee. The day's second transfer involved civilians who were arrested at checkpoints or kidnapped from homes in the Houthi-held capital.

Among those taken to Aden on Friday was Eid Allah al-Kouli, a prominent Yemeni intellectual and author. A leader of Yemen's writers' union said al-Kouli was a prisoner of conscience who was targeted for his criticism of Houthi authorities.

The conflict in Yemen erupted when the Houthis captured the capital, Sanaa in 2014, ousting the internationally recognised government of President Abed Rabu Mansour. That prompted a US-backed Arab military coalition to intervene in 2015.

The ongoing conflict has killed more than 110,000 people and pushed millions to the brink of famine.

While the two-day prisoner swap has been seen as a success that could revive the stalled peace process, ongoing military operations and deep mistrust between the two sides have caused previous agreements to fall apart.

Just one day after the UN Secretariat omitted Saudi-led forces from a "list of shame," an airstrike killed four children. The UN is under pressure to acknowledge Saudi Arabia's role in killing and maiming children.

The Southern Transitional Council has reneged on a deal brokered by the Saudi-led coalition to establish control over parts of south Yemen. The country's internationally-recognized government has rejected the move.

Foreign Minister Heiko Maas has hosted further talks aimed at ending the civil war in Yemen and building on the breakthrough achieved in Stockholm in December. No representatives from the country were at the table.