Yemen's internationally recognized government and the Houthi rebels have reached a deal to release over 1,000 prisoners in a swap. The exchange will be the first large-scale handover since the war broke out in 2014. 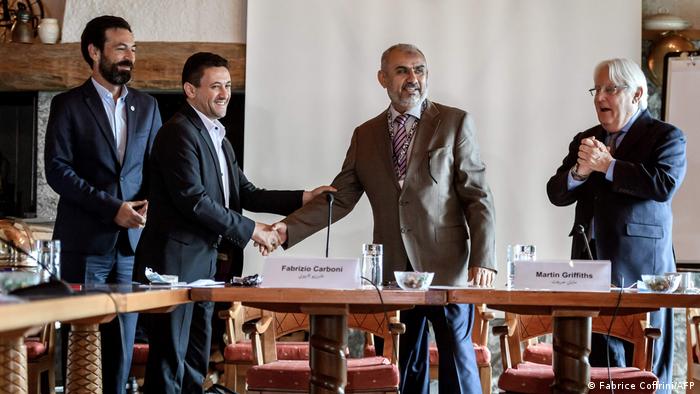 Yemen's warring sides on Sunday agreed to release over 1,000 detainees and prisoners in a swap deal, the United Nations said.

Delegates from Yemen's internationally recognized government and the Houthi rebels agreed to the deal as UN-sponsored talks concluded in Switzerland.

"Today is an important day for over a thousand families who can expect to welcome back their loved ones hopefully very soon," UN Special Envoy for Yemen Martin Griffiths said in a statement.

The two parties have seen occasional prisoner exchanges in the past but the release of over 1,081 loyalists and insurgents would be the first large-scale handover since the war began in 2014.

The swap is scheduled to start in mid-October, a rebel official told the media.

"The agreement to swap prisoners is considered an important step to break the ice after four rounds of negotiations on this file," the head of a rebel committee in charge of prisoners of war, Abdel-Qader al-Murtada, said.

Yemen's Foreign Minister Mohammad al-Hadhrami welcomed the deal as a "humanitarian" breakthrough. However, he also tweeted that "the government demands the agreement is implemented without stalling."

The agreement includes the release of 681 rebels and 400 government forces and allies, AFP quoted a member of the government delegation as saying. The report added that there were 15 Saudi and four Sudanese individuals in the group.

An extraordinary case of child marriage in Yemen has highlighted the rising number of forced, underage weddings. In rare instances, women have managed to fight back, reports Safia Mahdi from Sana'a.