World’s Tallest Solar Chimney Going Up Down Under | Germany | News and in-depth reporting from Berlin and beyond | DW | 25.07.2002

World’s Tallest Solar Chimney Going Up Down Under

Advocates of renewable energy may want to look towards the Australian outback: That’s where a German engineering firm is building the world’s largest commercial solar thermal power station. 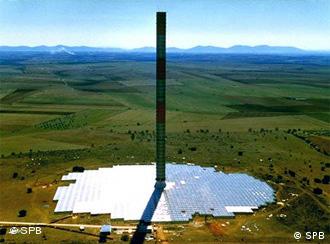 Reaching up to the sky - a prototype of the proposed solar station to be built in Mildura, Australia

The skyline of the small town of Mildura in northern Victoria in the rugged Australian outback is about to change drastically.

Over the next few years, a gigantic concrete chimney will rise and dwarf the numerous fruit orchards and rivers in the thinly-populated region, surpassing even the Petronas towers in Kuala Lumpur in sheer height.

Though it sounds almost surreal, the ambitious project - the world’s largest commercial solar thermal power station - is firmly rooted in reality. Or rather in solar energy.

The nuts and bolts of the plant

It’s the brainchild of Professor Jörg Schlaich and his structural engineering firm Schlaich Bergermann and Partner in Stuttgart and their Melbourne-based partner, Environmission. Together they plan to build a gigantic solar plant that will draw on the tried and tested principles of the greenhouse, the chimney and the turbine.

The plant will consist of a massive circular greenhouse solar collector at the base of the tower, which will be about five kilometres wide and would almost fit into the playing surface of the famed Melbourne Cricket Ground.

The sun’s radiation would heat the body of air under the collector’s roof made of semi-transparent glazed material. The warm air would be sucked by the giant tower through its chimney-like structure, and the movement of the air in turn would drive 32 wind turbines and thereby generate electricity.

A tower that reaches into the sky

Wolfgang Schiel, partner in the Stuttgart-based engineering firm, told DW-WORLD that the solar tower needs to be enormous because the "efficiency of the plant is directly proportional to the height of the tower. The higher the tower, the more electricity it can produce".

At its planned height of 1 kilometer (.62 mile) and a diameter of 170 metres, the solar tower will have wind speeds of 54 kilometres per hour that will produce an estimated 200 megawatts of electricity – enough to supply 200,000 households per year, says Schiel.

Solar station for a steep price

"The whole power station is being built at an estimated cost of $800 million Australian", says Schiel. That’s about 450 million euro – no mean price.

"Price is the most important factor in the solar energy business", he says. He estimates that the production costs for a solar energy plant on this scale is about 20 percent higher than a coal-fired plant. "The basic question for success will be the cost – it will be about 8 Australian cents or 4,5 European cents per kilowatt".

This price, however, will almost certainly deter under-developed countries -- desparately in need of cleaner energy sources -- from investing in solar power.

"In Ghana for instance, the government is only interested in getting the cheapest electricity, no matter if they’re polluting coal-based plants," Schiel says. "Renewable energy doesn’t stand a chance".

Australia, with its abundance of sunshine and open spaces, provides fertile ground for such a gigantic solar energy project, according to Schiel.

"But the most promising thing in Australia is that people are looking for renewable energy and are willing to invest in it because it’s simply much more environment-friendly", he says.

Such a large-scale "no greenhouse gas" project would also give a huge boost to the Australian government’s target of producing 9,500 gigawatt hours of electricity from renewable energy by 2010.

Too much research, less practical reality in Germany?

Germany also has a plan to clean up its energy sources, with a commitment to switching to 15 percent renewable energy by 2015.

But Schiel thinks the German government is placing too much emphasis on supporting research. "What is required first is investment in industry to have plants up and running, to develop technology on a real scale rather than spending money for plans on paper. The unfortunate reality is that we have no real plants to show potential investors".