On World Refugee Day, Germany’s foreign minister has called for increased protection of refugees. The number of people displaced by war and conflict is nearly equal to the population of Germany. 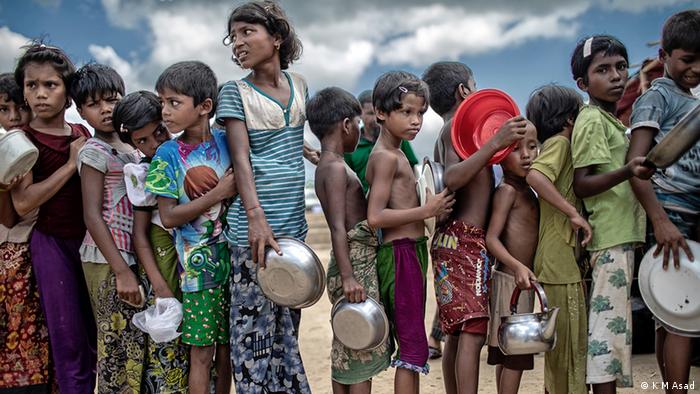 On the occasion of World Refugee Day — recognized annually on June 20 — Germany's foreign minister called for greater protection and care for refugees,.

"79.5 million people have had to leave their homes and either live in their country as internally placed persons or flee over the border," German Foreign Minister Heiko Maas said in Berlin on Saturday. "That's about the same as the population of Germany — a very sad new record."

Less than 10% of refugees live in Europe, Maas said. The vast majority find refuge in their neighboring countries, which are often themselves suffering from crises and poverty, he said.

UN report: Number of refugees in the world has doubled

Support is a 'matter of life and death'

"People affected by flight and displacement around the world must be able to lead a dignified life," the foreign minister said. "And they must be given the opportunity to develop their potential and make a positive contribution in their host community."

During the coronavirus crisis in particular, protection and care for refugees is "a necessity that often means the difference between life and death," Maas added.

"Together with our partners, we are working to prevent the spread of the virus among refugees, who often live in particularly cramped conditions," he said.

Even as many borders are closed due to the coronavirus, shelters for refugees need to remain available, Maas said.

COVID-19 and migrants in Mexico

The parliamentary party leader of Germany's environmentalist Greens Katrin Göring-Eckardt also appealed to the federal government to facilitate the family reunification of refugees.

"Families belong together. The federal government needs to finally—and unbureaucratically—issue family visas," she told the Saturday edition of the newspaper Neue Osnabrücker Zeitung.

The coronavirus pandemic has worsened the situation for separated families, she said. "When…young people come of age, as long as the visa offices at German missions abroad are still closed, these people can permanently lose the right to live with their families," Göring-Eckardt explained.

The chairman of the Council of the Protestant Church in Germany (EKD) Heinrich Bedford-Strohm also called on people in Germany to show solidarity with refugees.

"Do not close your heart. And help," Bedford-Strohm said in a video shared on Facebook on Saturday. "By accompanying people who seek refuge here. By taking a political stand for greater solidarity with refugees. By giving money to help people live in dignity wherever they are. By praying for them."

President of "Bread for the World" Cornelia Füllkrug-Weitzel called for a new EU refugee policy.

She expects the German government to use its EU Council presidency to take "very decisive steps" to do so, Füllkrug-Weitzel told radio program RBB on Saturday. Fair asylum procedures and a fair distribution of refugees would have to be enforced throughout Europe, she said.

Germany takes over the presidency of the Council on July 1, 2020.

Mayor in seven German cities pled with the government for the right to welcome underage refugees from Greece. The move comes after the federal parliament rejected a motion to accept minors from Greek refugee camps. (06.03.2020)

Forced from their homes by floods, storms and wars, internally displaced people across the world are now at risk of the pandemic. Distancing rules and hygiene are hard to practise without a safe home. (28.04.2020)