World reacts to the new Pope Francis | World | Breaking news and perspectives from around the globe | DW | 13.03.2013

From all over the world, leaders are sending their congratulations to Jorge Mario Bergoglio, who became Pope Francis on Wednesday night. He is the first pope from South America, and the first Jesuit pope as well. 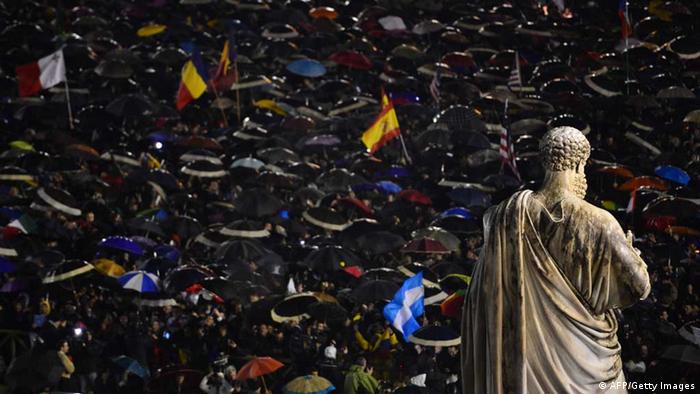 Catholics worldwide were surprised when they learned on Wednesday (13.03.2013), that the Argentine cardinal was chosen to be the new leader of the church. Bergoglio was one of the favorites eight years ago, when the conclave chose Benedict XVI as pope.

Political and religious leaders from all parts of the world have sent their congratulations to Pope Francis.

"Millions of believers in Germany and the world have waited for this moment," she said. "Their hopes now lie with the new pope."

Robert Zollitsch, the archbishop of Freiburg and chairman of the German Episcopal Conference, said "I believe we will be able to talk to him in all openness about the questions that move us and also about questions that concern the entire Catholic Church. But, first and foremost, I believe that he is a man who despite his high age of 76 years can lead the Church into the future because he knows the problems of today and is looking forward. And he is someone who will have the courage to tackle those questions."

Wolfgang Thierse, vice-president of Germany's parliament, also congratulated Francis, expressing his hope that the new pope would bring a fresh spirit to the papacy. "It's good that it's not again a European like in the past 2,000 years but someone from South America - the continent where most Catholics live. It's remarkable that he chose the name Francis and it gives hope that it's a programmatic choice: A saint of poverty, of social issues, of a remarkable relationship with nature."

"A message of love and compassion"

From Washington, US President Barack Obama conveyed his and his wife's "warm wishes to His Holiness Pope Francis" and said the new bishop of Rome would carry forth a "message of love and compassion that has inspired the world for more than 2,000 years."

UN Secretary General Ban Ki Moon said he looked forward "to continuing cooperation between the United Nations and the Holy See," while adding he was sure that Pope Francis would "continue to build on the legacy of his predecessor, Pope Benedict XVI, in the promotion of interfaith dialogue which is at the heart of the Alliance of Civilizations initiative."

Israeli President Shimon Peres said the pope was a meaningful leader who "for all of us not just for the Catholic community" and that he "represented the devotion, the love of God, the love of peace, the holy modesty and he represents a new continent which is now awakening."

A spokesman for the Palestinian President said "Mahmoud Abbas extended an invitation to his holiness to visit the Holy Land" and that Abbas was "determined to continue exerting every possible effort in order to faster relations between Palestine and the city of Vatican."

And Cristina Fernandez, president of Argentina, saluted the pope in the name of "the people of our country."

Catholics in the world

The world's roughly 1.2 billion Catholics now have a new religious leader. DW's infographic shows how many of them live on each continent. 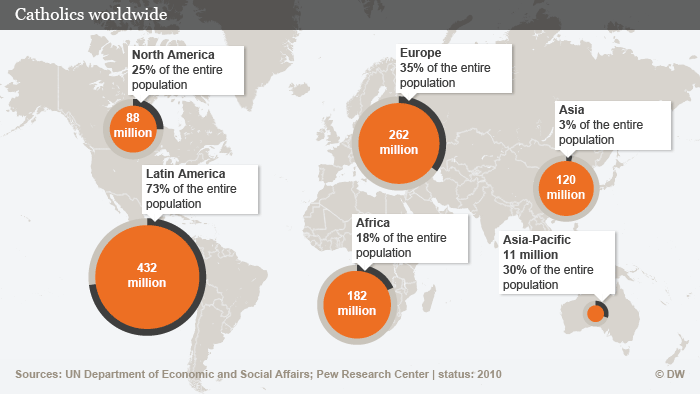