United Nations agency the World Food Programme has won the Nobel Peace Prize, the Norwegian Nobel Committee announced in Oslo. The organization combats hunger and famine around the world. 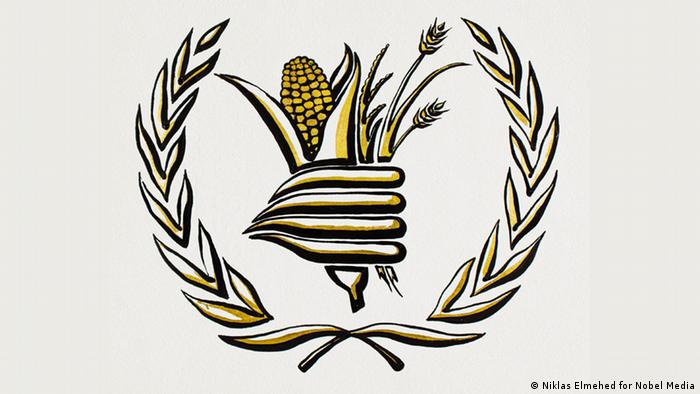 "With this award, we wish to turn the world's eyes to the millions of people who face hunger and food poverty," Berit Reiss-Andersen, chair of the committee, announced in Oslo on Friday.

In 2019, the WFP provided assistance to close to 100 million people in 88 countries who are the victims of acute food insecurity and hunger.

The Rome-based WFP has also been instrumental in working to fight increased hunger caused by the coronavirus pandemic, Reiss-Andersen noted, adding that food insecurity is also a driving cause of conflict in the world.

"This is a powerful reminder to the world that peace and zero hunger go hand-in-hand," the WFP wrote on Twitter.

The World Food Programme's (WFP) Berlin spokeswoman Bettina Lüscher spoke to DW after the organization was awarded the prize.

"It's amazing and very humbling. It's such a difficult job that my colleagues in the field are doing, especially now during the coronavirus when hunger has gone up."

She said too few realized how food was often used as a weapon of war, and that food aid can be a force for peace if it arrives in good time:

"Food can be a real weapon for peace if we get in before a war escalates, before a conflict escalates and bring food to people so that they are not fighting each other in order to survive, in order to get food."

German Foreign Minister Heiko Maas called the recognition "highly deserved" for the agency's work in saving millions of people from starvation and malnutrition.

British Prime Minister Boris Johnson also praised the agency. "The UK is proud to support its life-saving work in fighting hunger and famine worldwide," he said.

What is the World Food Programme?

Set up in 1962, the WFP was an experimental way to provide food aid through the UN system. Its first project provided food aid after an earthquake in northern Iran. It now has more than 17,000 staff members, with 90% based on the ground in countries where assistance is provided.

The organization focuses on emergency assistance as well as rehabilitation and development aid. Around two-thirds of its work has to do with conflict-affected regions.

There was already an increase in world hunger even before the coronavirus pandemic, with the number of food-insecure people rising by 70% in the last four years. The WFP is predicting a "hunger pandemic" caused by the economic fallout of COVID-19.

"Before the coronavirus even became an issue, I was saying that 2020 would be facing the worst humanitarian crisis since World War II," WFP's executive director David Beasley told the UN Security Council earlier this year. "With COVID-19, we are not only facing a global health pandemic but also a global humanitarian catastrophe."

Beasley said he was "deeply humbled" by the award.

This marks the 25th time an organization rather than an individual has been honored with the award, which has been presented 101 times since 1901.

The prize for peace differs from the other annual Nobel awards as it is awarded by the Norwegian rather than the Swedish committee, as laid out in prize founder Alfred Nobel's will.

There were 318 candidates, 211 individuals and 107 organizations. Nominations can be made by a select group, including national lawmakers, heads of state and certain international institutions. Nominees are kept secret for 50 years after the prize is awarded.

Along with enormous prestige, the prize comes with a 10-million krona ($1.1-million/€960,000) cash award and a gold medal to be handed out at a ceremony in Oslo on December 10, the anniversary of Alfred Nobel's death. This year's ceremony will be scaled down due to the pandemic.

On Monday, the Nobel Committee awarded the prize for physiology and medicine for discovering the liver-ravaging hepatitis C virus. Tuesday's prize for physics honored breakthroughs in understanding the mysteries of cosmic black holes, and the chemistry prize on Wednesday went to scientists behind a powerful gene-editing tool. The literature prize was awarded to American poet Louise Glück on Thursday for her "candid and uncompromising'' work.

Still to come next week is the prize for outstanding work in the field of economics.

The site, co-founded by Nobel laureate Maria Ressa, was known for covering outgoing President Rodrigo Duterte's bloody crackdown on illegal drugs. The move comes a day before Duterte is due to leave office.

The Russian leader has finally broken his silence on Novaya Gazeta editor Dmitry Muratov. But Muratov has shown himself to be unimpressed by what seems like a warning.

Ressa received the award for "efforts to safeguard freedom of expression," primarily with her news outlet Rappler, and during a decadeslong career in investigative and broadcast journalism in Southeast Asia.