The Nobel Prize in physics has been awarded to British scientist Roger Penrose, along with German Reinhard Genzel and US physicist Andrea Ghez, for their research into black holes.

The Nobel Prize in physics has been awarded to British-born Roger Penrose  for the discovery that black hole formation is a robust prediction of the general theory of relativity, along with German Reinhard Genzel and US physicist Andrea Ghez  for the discovery of a supermassive compact object at the center of our galaxy.

"This year's prize is about the darkest parts of the universe," the Nobel Committee said Tuesday when announcing the award in Stockholm. 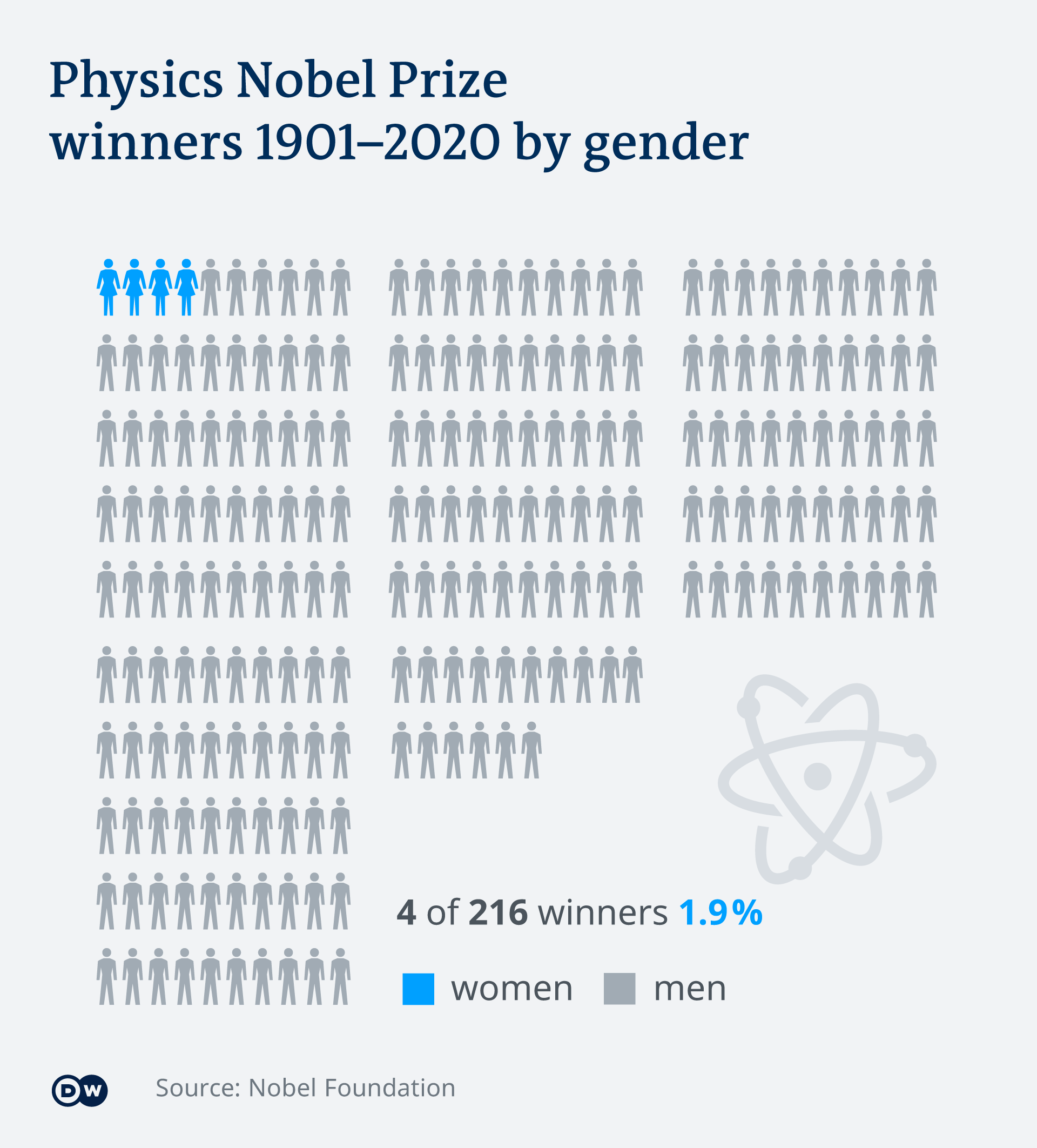 In over 100 years since the Nobel Prizes have been awarded, Ghez becomes only the fourth woman ever to win for physics.

"I take very seriously the responsibility associated with being the fourth woman to win the Nobel Prize in physics," adding that she hoped it could "inspire other young women into the field."

Penrose's research, published in 1965, was described as the "most important contribution to the general theory of relativity since Einstein" while Ghez and Genzel's work discovered the "most convincing evidence yet of a supermassive black hole at the center of the Milky Way," according to the committee.

The latter scientists, who were competitors in the same field, made their separate discoveries after aiming specialized telescopes at the center of our galaxy, about 25,000 light years away, in search of a black hole.

"Direct radiation, or the direct signals from that black hole, are difficult to trace," says astronomer Norbert Junke of the Max Planck Institute for Radio Astronomy. "[So] they did it with stars circling the black hole."

To make a crude analogy ("semi-ridiculous" is how Junke put it), imagine there’s a hole at the bottom of your swimming pool. How big is it? Well, one way to find out would be to look directly at the hole itself, using goggles.

But if goggles hadn’t been invented yet? Well then, and assuming some water was draining downward in the shape of a whirlpool, you could also measure the speed of a beach ball that was circling around the whirpool.

Similarly, one star, "S2," was orbiting… something — and at enormous speeds.  S2 was four times the distance to its host object as Pluto is to our sun, and yet S2 orbited that object in just 16 years (to Pluto’s 250).

"That gave you access to the parameters of the black hole,” Junke says. “And with observations in the near infrared, they could trace that, nail it down. That was half of the Nobel Prize announced today." 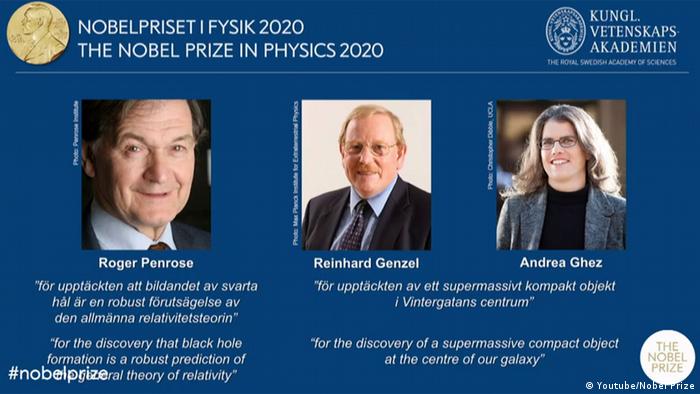 It's common for the prize to go to multiple people, typically to those focusing on a single scientific achievement or connected achievements. Penrose has won 50% of the award; Ghez and Genzel share the other half.

The winners of the physics prize were announced on Tuesday morning by the Swedish Nobel Committee, which traditionally doesn't share the list of nominees ahead of time. Tuesday's announcement was slightly delayed because the committee gets in touch with the winners by phone before publicly announcing their name. For Ghez in California, the phone call came at around 2:30 a.m. 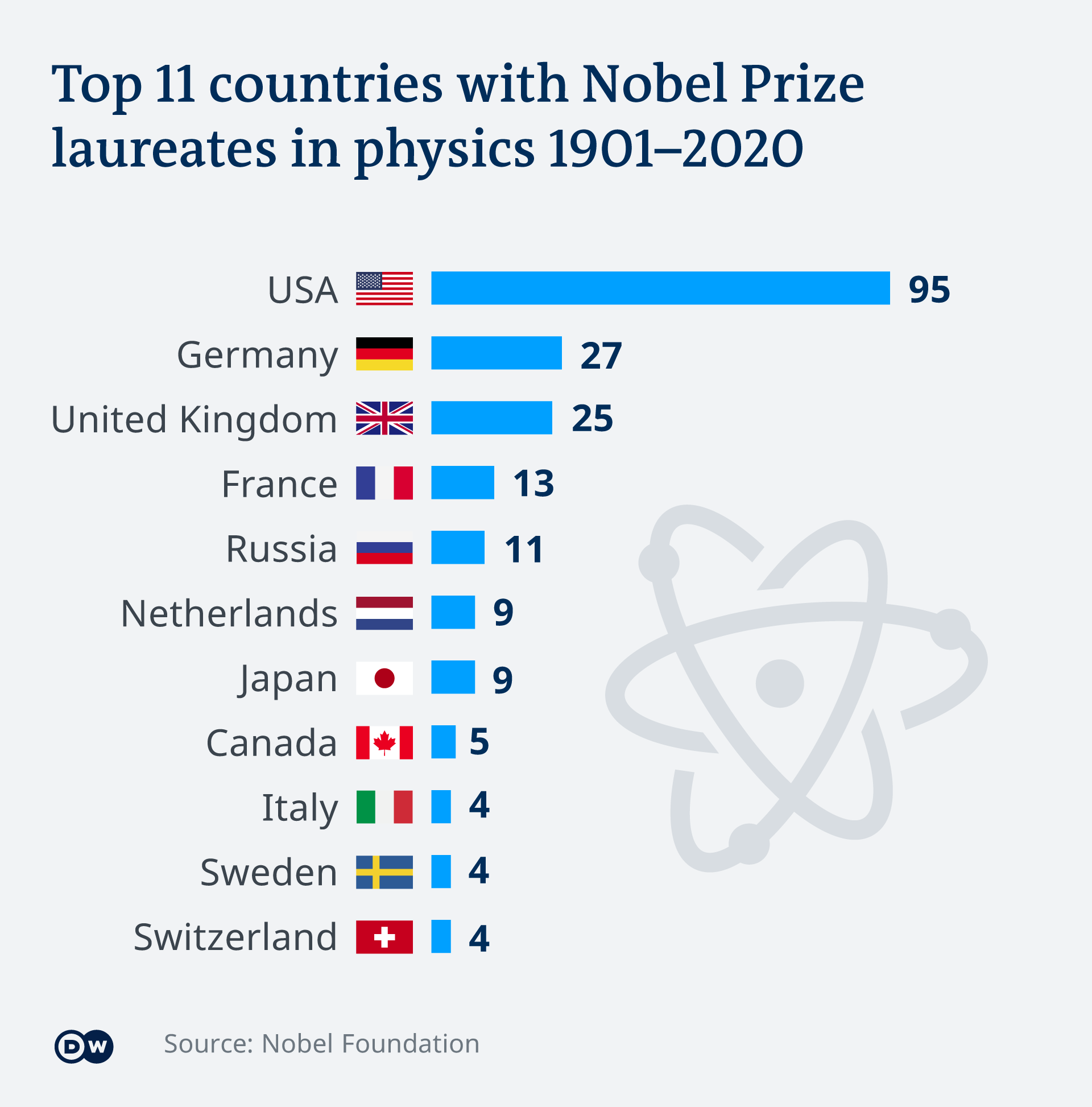 Prize purse will be split

Last year's prize went to Canadian-born cosmologist James Peebles for theoretical work on the early moments of the Big Bang, and Swiss astronomers Michel Mayor and Didier Queloz for discovering a planet outside of our solar system.

On Monday, the committee awarded its prize for physiology or medicine to US scientists Harvey J. Alter and Charles M. Rice as well as British-born scientist Michael Houghton for discovering the hepatitis C virus.

The other prizes awarded by the committee are for chemistry, literature, peace and economics, most of which will be announced later this week. The winner of the peace prize will be announced on Friday in Oslo.

US scientists are expected to say they can show that gravitational waves exist, ending a century-long search to prove one of Einstein's theories. Here are six reasons they're so important for understanding our universe.

A US researcher has noticed a black hole taking more than a decade to devour a star. Most black holes only require one year to eat stars.

A Norwegian lawmaker has nominated the US president for the 2021 award for helping to broker the Israel-UAE peace deal, according to FOX News. And it's not the first time Trump has been put forward.