Just a few weeks after Andre Schürrle announced his retirement, another member of the 2014 World Cup winning squad has called time on his playing career. At age 32, Benedikt Höwedes has decided to quit football. If Benedikt Höwedes' career were to remembered in one moment, it would his sensational block on Olivier Giroud in Germany's 2016 European Championship semifinal against France.

Andre Schürrle's recent retirement spoke to the frustrations and pain of the football world, with the forward saying there was no place to show emotions. Höwedes' words felt much more like a man who had come to the realization that, for all that it had done for him, he just didn't need football anymore.

"It might sound a little stupid because I have profited so much from football but money is not important to me. Expensive watches and cars don't fit my lifestyle," Höwedes told Spiegel.

Höwedes' comments on finance are to be taken with a pinch of salt - it is always easier for those with wealth to talk about a life where money is not important - but the true motivation for his retirement appears between the lines elsewhere. Höwedes told German publication Spiegel he had offers from Germany and abroad, but he "didn't want to be dependent on the decisions of others anymore." He also admitted that he had noticed in the last couple of seasons at Lokomotiv Moscow that he had needed longer to recover. Both his mind and his body were telling him it was time.

Perhaps most telling though, were the sentiments offered from his soul. "I was recently with my wife and child in a camper van in the south of France and I realized how amazingly fulfilling it was to be so close to my son. Suddenly football felt so unimportant to me," Höwedes statement continued.

Words that are the most natural for so many human beings seem to take on a special meaning when athletes utter them, perhaps a sign that too often we forget that behind the performances of our sporting heroes are lives.

For Höwedes too, this appears to have been a moment where he realized he no longer needed the pre-season training camps, the injections to help him through games or the unrealistic expectations anymore.

It is odd that it's often in retirement that the value of players like Höwedes truly become apparent. Without the highlight compilations, awards or headlines, it is easy to look past another player running around on the grass. Perhaps that might have been different had his header against Argentina in first-half stoppage time in the Maracana gone in, but that would have disguised Höwedes' reality.

Over six years, Höwedes played 44 times for Germany. He was a member of the famous 2009 Germany U21 Euros-winning team and in Brazil in 2014, he played every minute. Nevertheless, he is one of the least mentioned names when either tournament is discussed.

Every successful team needs a team player, a solid and reliable person who wants to win and has the abilities to lead. That was Höwedes, as legendary Schalke youth academy coach Norbert Elgert and Germany coach Joachim Löw have said. 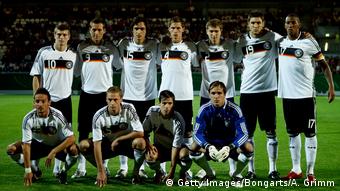 Höwedes was part of the 2009 U21 Euro winning side

Höwedes was the last true club figure on the field at Schalke, and amidst the chaos of the modern era the absence of a stable leader is notable at the Bundesliga club. Höwedes had come through the academy, worn the armband and embodied the hard-working approach. He was a tough-tackling, solid in the air, no-nonsense sort of defender. But after 16 years, 240 games and a German Cup win, the one club he thought would always want that suddenly changed course.

Schalke's then head coach Domenico Tedesco stripped him of the captaincy, in an attempt to make the squad his own. The power move didn't work in Tedesco's favor and Höwedes was rocked by the move. The defender was supposed to end his career at Schalke, be one of the last one-club men, a status befitting of his solid play and reliable manner. It wasn't to be.

Perhaps that was the moment where Höwedes looked at football a different way. He went to Juventus but injuries hampered him. In Moscow, he rediscovered his fitness and form, returned to the Champions League and won a domestic cup. Off the field, he became a father and made the decision to follow a plant-based diet.

With a turn out for the old boys team at his youth club TuS Haltern the only football left on the cards for Höwedes, it is clear another 2014 World Cup winner in leaving the sport on his terms.

Schalke still miss Benedikt Höwedes, and so will football. Because if there's one way to remember Höwedes' career best, it's that every team would have been better with him in it.