Following Germany’s shock World Cup exit, the country’s referee Felix Brych is also heading home early. The 42-year-old was criticized by Serbia over his performance in their defeat to Switzerland. 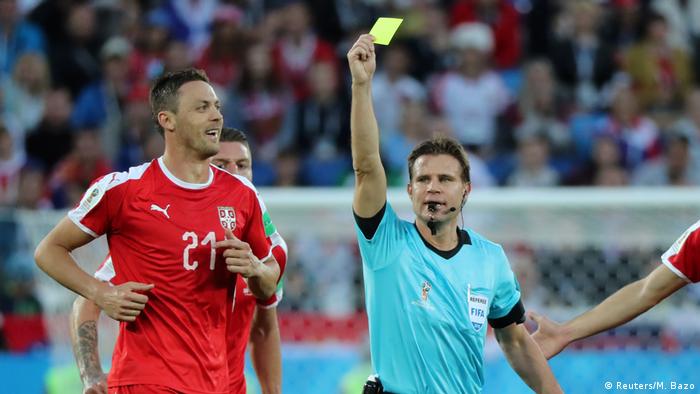 Felix Brych has been told by FIFA that he will not be used again at this World Cup after having made just one appearance at the tournament, the Group E match between Serbia and Switzerland.

Serbia lodged a complaint with football's world governing body FIFA after they felt they should have been awarded a penalty in their 2-1 defeat in Kaliningrad.

Brych waved play on after Serbian striker Aleksandar Mitrovic appeared to have been wrestled to the ground by both Stephan Lichtsteiner and Fabian Schär. The Munich native stood by his on-field decision and controversially opted not to make use of the video assistant review system.

"The course of the World Cup is of course a bitter disappointment for me and my team. But life goes on and we'll be back," Brych said.

The head of the German football association's (DFB) refereeing committee, Lutz Michael Fröhlich expressed confidence in Brych, despite his early exit from the World Cup.

"I am sure that Felix will deal with this decision in a professional manner and deliver strong performances at the national and international level in the upcoming season," Fröhlich said. "He remains one of the best referees in the world."

Three Switzerland players have been hit with fines but avoided World Cup bans, after celebrating goals against Serbia with pro-Kosovo gestures. The political symbol, which FIFA prohibits, caused outrage in Serbia. (25.06.2018)

Criticism of the World Cup in Qatar by human rights activists and fans has not died down. However, one year before the start of the tournament, federations and footballers are focusing more on the sport.

Germany have been handed a favorable qualifying group for the 2022 World Cup. The four-time winners have been paired with Romania and Iceland for the year-long qualifying process, which gets under way in March 2021.

Another six-goal thriller brought an entertaining but unsatisfying end to the international week for Joachim Löw's side. Timo Werner, Kai Havertz and Serge Gnabry made up for some dodgy defending, but problems persist.