Women′s Bundesliga not facing wave of bankruptcies — at least not yet | Sports | German football and major international sports news | DW | 04.04.2020

Women's Bundesliga not facing wave of bankruptcies — at least not yet 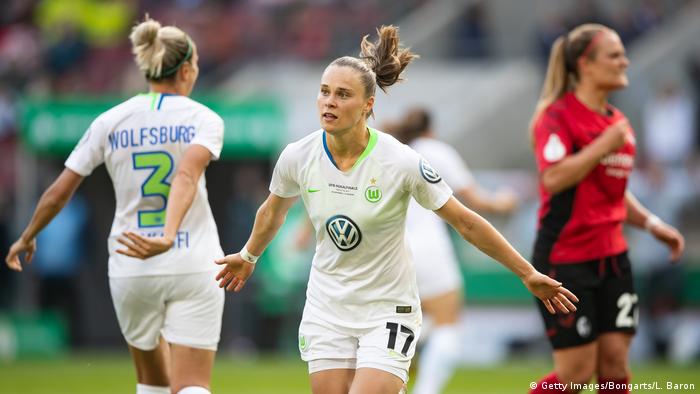 European football has largely ground to a halt. And in this respect, for a change, men's and women's football are on a level playing field. While the two genders in the game have been equally affected, the contrast between what the crisis could mean for both sides appears stark.

German professional football is on hold until the end of April, with no guarantee that this hiatus won't be extended beyond that.

"We all very much hope that during this forced break in play until April 30 things will develop in a positive way, so that the clubs can resume training as soon as possible, and the rest of the season can be rescheduled," said Siegfried Dietrich, chairman of the German FA's (DFB) women's Bundesliga committee and manager of what had traditionally been one of the country's strongest women's clubs, FFC Frankfurt.

The league is absolutely determined to play out the rest of the season, even if this means playing matches behind closed doors.

"For the women's Bundesliga, matches without spectators could be something of a lifeline, a way of putting attractive matches under the media spotlight," said Heike Ullrich, the DFB's executive committee director in charge of women's and girls' football.

The aim, she says, is to complete the schedule by June 30. The negative financial impact of finishing the season behind closed doors would be relatively manageable for women's football, in comparison to the men's game, as matchday revenue is a relatively minor factor in Germany's top flight, with an average of less than 1.000 spectators per match (based on 2018-19 figures).

However, this appears to be of little interest to the financial heavyweights of the men's game. When German Champions League participants Bayern Munich, Borussia Dortmund, RB Leipzig and Bayer Leverkusen announced a plan to provide financial aid of up to €20 million ($21.6 million) for the other 32 clubs in Germany's first and second divisions, there was no sign of solidarity with the women's game.

The Danish Football Association (DBU) recently suggested that the governing body of European football, UEFA, had decided to postpone the Women's Euros in England from 2021 to 2022. This came after UEFA announced that it was postponing the men's Euros from 2020 to 2021 due to the coronavirus outbreak. For many, this underlined that, while UEFA declared in 2019 that women's football was an "essential part" of its strategy for the next five years, its priority clearly remains the men's game.

However, Germany coach Martina Voss-Tecklenburg doesn't appear to be particularly bothered by the postponement.

"If we have to postpone our European Championship, I think that would be good for the tournament, as it will generate (media) attention." Voss-Tecklenburg told ZDF public television.

"A postponement by a year could even turn out to be an advantage for us, as this would give us even more time to develop our young team," Popp told the leading German football publication Kicker.

The 28-year-old plays her club football for VfL Wolfsburg, who are top of the league and have, by the standards of women's football, a lot of money behind them. But even the defending German champions are trying to come to grips with the crisis sparked by the coronavirus outbreak.

"Management, the coaching team and players are in regular contact with each other. Our players have received training plans to follow in order to keep themselves fit in their home environment," Dirk Zilles of the club's women's department told DW. He added that the women's football department was in no danger of folding, at least not yet. This also applies to less solvent clubs.

"We are not in imminent danger," Florian Zeutschler, managing director of women's Bundesliga club SGS Essen, told DW. "But this is how things stand at this particular moment."

He also conceded that the club's management were preparing for a possibly darker tomorrow.

"We are not in a financial crisis at the current time. So any plans for further measures still aren't on the table," Zeutschler said. 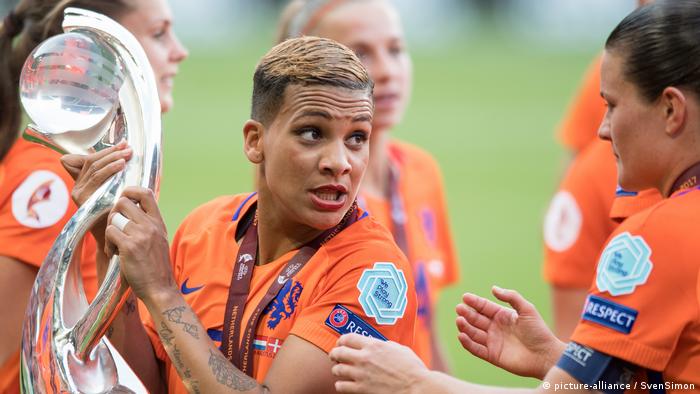 The Netherlands are the reigning European champions

SGS Essen's annual budget includes around €750,000 in player salaries, not quite a quarter of the €3.5 million that Wolfsburg pay their players. And as is the case in so many sports hit by the coronavirus outbreak, salary cuts are a distinct possibility - at some point in the future.

"We spoke to our players and informed them about the possibilities. We will do everything we can to prevent this from happening," Zeutschler said.

However, even then, the figures would be relatively low, as women can only dream about the millions in salaries that many of their male counterparts earn. Italian giants Juventus, for example, are saving around €90 million over a period of four months alone through the "temporary salary waiver" negotiated with Cristiano Ronaldo and co.

"We are not discussing a salary waiver," Dietrich told the Frankfurter Allgemeine Zeitung.

"What women earn in football is by no means comparable to what the men can earn. The women players are the key figures and earn every cent. They really need every cent, as this is their livelihood."

Rolf Kutzmutz, president of Turbine Potsdam, another one of Germany's women's clubs with a strong tradition, struck a similar tone in an interview with public broadcaster ARD.

"Apart from being a symbolic gesture, it would be useless," he said.

So while a pay cut would hit women footballers themselves very hard, it would do little to actually help their clubs, which have stricken by the coronavirus outbreak.

FIFPro: Women's football must not be neglected

The players' union FIFPRO, which represents around 50,000 professional players worldwide, believes the outbreak is threatening the very well-being of the women's game.

"We're deeply concerned the recent growth of women's football will be slowed down or even driven backwards as a result of this global health crisis," Amanda Vandervort, FIFPRO's chief women's football officer told DW.

The American also criticized the professional clubs that have been calling on their players to accept significant cuts in salary. She pointed to "a range of options, from national-government state aid to a global assistance program, which FIFA is discussing. These must apply to both women's and men's football, with mechanisms in place to ensure the women's game is effectively included and supported."

Bayern Munich head coach Hansi Flick has signed a permanent deal with the German champions which will keep him at the club until 2023. The 55-year-old has won 18 out of 21 games in all competitions since taking charge. (03.04.2020)