Germany's first and so far only Green state premier has been returned to office in regional elections this Sunday. His alliance with the conservative CDU is seen as a model for the national level in the post-Merkel era. 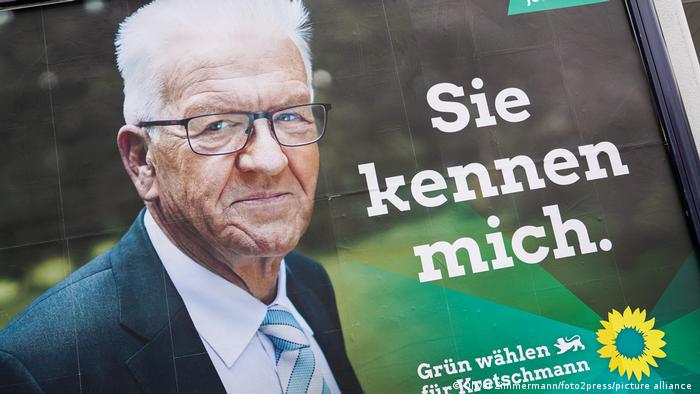 At age 72, Winfried Kretschmann was uncertain if he should run again, but he said he looked to the example of former California Governor Jerry Brown in the US, who was in office until he was 80, and decided to throw his hat in after all — to the delight of his party.

Kretschmann has mass appeal in Germany's conservative south and is more popular there than the party he represents. An opinion poll by German public broadcaster ZDF in February showed that while 30.3% of the electorate polled in Baden-Württemberg planned to vote for the Greens, 70% wanted Kretschmann as state premier.

This ability to pull in conservative voters who would not otherwise vote for the Greens has been labeled the "Kretschmann effect."

Moving from the left to the right

Kretschmann's political biography reads like a history of the Greens: From his start in left-wing radical politics of the 1970s to his eventual move to the center and the success at the ballot box that made him the first Green state premier.

It illustrates how the Greens have changed and succeeded electorally in the decades since their founding to the point where many experts predict they will become the second-largest party after this September's national election and likely coalition partner for the Christian Democrats (CDU). 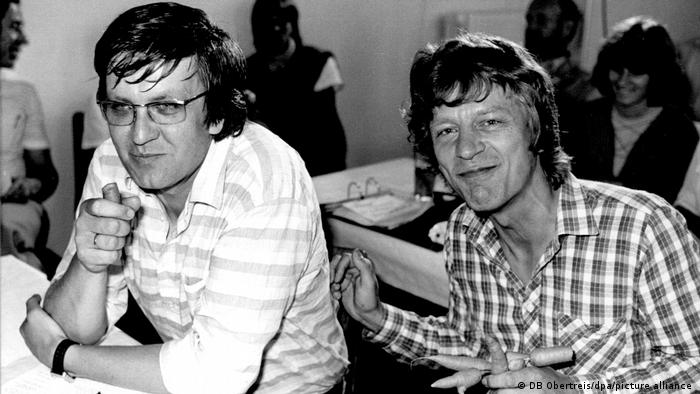 Kretschmann was born in 1948 in Spaichingen in southwestern Baden-Württemberg to a Catholic family that had fled German East Prussia at the end of World War II. According to his biographer Johanna Henkel-Waidhofer, he grew up with stories about his parents' flight and of an older sibling who died during the journey. "He knows what it is to be a refugee," said Henkel-Waidhofer.

As state premier Kretschmann was a strong supporter of German Chancellor Angela Merkel's decision to allow 1.1 million refugees and migrants into Germany in 2015. But here too his views have changed with the times. In recent years, he has warned that there "can be no uncontrolled influx into Europe" and that refugee "male hordes" guilty of crimes should be sent "into the sticks" to make committing crimes harder for them.

"He cares about traditional values and industry and doesn't think much of political correctness, and that is what our people like," Matern von Marschall, a CDU member of German parliament representing the Freiburg District in Baden-Württemberg, told DW. "The Greens can be irritated by Kretschmann, but they are happy he is so successful.

Kretschmann's political awakening came in 1970 when he went to Hohenheim University to study biology, chemistry, and ethics. He studied at a time when universities were the center of massive social change in Germany focused on confronting former Nazi officials who held positions in the West German government, courts and universities. While there, he was involved with the Communist League of West Germany, a small Maoist far-left political party that wanted to smash the "bourgeois state apparatus" and during its existence never attracted more than 0.1% of national voters. Kretschmann now calls that period of his life a "mistake" and credits his wife for pulling him out of it.

In 1979, Kretschmann found his permanent political home and was one of the co-founders of the Green Party in Baden-Württemberg. They had grown in popularity due to their opposition to the planned construction of a nuclear power plant. In 1980, Kretschmann was first elected to the Baden-Württemberg regional parliament and in 1986 moved to the state of Hesse to work for Joschka Fischer in the first Green-run regional environmental ministry. Fischer would go on to lead the Greens into their first national coalition government and serve as foreign minister and vice-chancellor from 1998 to 2005.

Swept to power by the Fukushima disaster

Kretschmann's political breakthrough came in 2011 when he was the parliamentary leader for the Greens in Baden-Württemberg. The Greens were buoyed by support for ending nuclear power in Germany following the Fukushima disaster in Japan. In that year's state elections, the Greens came in ahead of the Social Democrats (SPD), but behind the CDU. After the CDU failed to form their own coalition, the Greens and the SPD entered into a coalition, making Kretschman the first Green state premier in the history of the country and ending 58 years of CDU rule in the state. After the 2016 state election, the Greens became the largest party in the regional parliament and went into a coalition with the CDU.

In the following years, Kretschmann has made a name for himself by going against the grain of traditional Green politics. He's a committed environmentalist and social liberal but talks openly about his diesel-fueled car and his Catholic faith. Those positions create tensions in his party and even prompted the creation of a rival environmentalist party, the "Klimaliste," ahead of the election.

Kretschmann's unusual positions have seemingly separated from his party and the usual political squabbles. That image helped him to be considered for the German presidency in 2016. "He managed to not be perceived as a party man, but rather as a wise representative of the state," said University of Mannheim political science Professor Harald Schoen.

Kretschmann's image has also changed the image of the Greens and made them contenders to lead state governments and pursue coalitions with partners besides the SPD. "He has shown that greens are pragmatic. You can't govern without that," said Henkel-Waidhofer.

While you're here: Starting on March 16, DW editors will round-up for you what is happening in German politics and society, with an eye toward understanding this year’s elections and beyond. Sign up here for the weekly e-mail newsletter "Berlin Briefing," to stay on top of developments as Germany enters the post-Merkel era.