Winfried Kretschmann was the big winner in the Baden Württemberg state elections and is set to become Germany's first-ever Green state premier. He has plans to change the party's image. 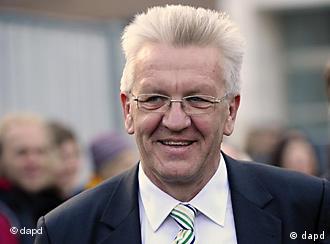 Kretschmann is not a proponent of radical ideas

For a member of the Green party who has made history, Winfried Kretschmann might be described as somewhat conservative.

He has worked as a teacher and, as a devout Catholic, he is heavily involved in the church. Gardening is a favorite pastime, but is also happy to swap his outdoor overalls for a neat suit during public appearances.

It's also fair to say that, politically, Kretschmann is no representative of radical opinion. This, along with his demeanor, has won him the confidence of Baden Württemberg's middle classes. He does not intend to disappoint them. 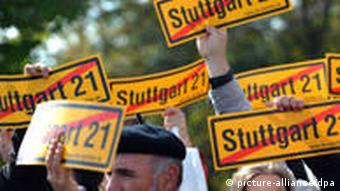 Protests over Stuttgart's main railway station may have strengthened Greens

Kretschmann was one of the co-founders of the Green party in Baden Württemberg in 1979 and entered the state parliament in Stuttgart in 1980.

"It sounds a bit pathetic now, but it was my love of nature that spurred me on," he has said since.

From the beginning, Kretschmann was a staunch opponent of nuclear power. For some years he worked under Joschka Fischer, who was the Green party's first-ever environment minister in the state of Hesse. Within the Baden Württemberg state parliament, it was not long before he was elected leader of the parliamentary party.

Finally, he became the primary Green candidate for the 2011 state election. At a party convention last autumn he said that a new wind needed to blow.

"If we want to get most of society, and not just parliament, behind us when it comes to important projects, then the style of our debate should change and must change."

"We must do away with the label that the Greens are a party of naysayers. We have been hearing this outdated accusation for the last 30 years and we should put an end to such platitudes."

Kretschmann enjoyed a large boost in support from a public movement within Baden Württemberg against the redevelopment of Stuttgart's main railway station. Opponents to the scheme have drawn national attention to their protests against the cost, disruption and environmental implication of the plans.

The "Stuttgart 21" demonstrations became even more of a focal point after the police used water cannons on protesters. Kretschmann attacked incumbent Christian Democrat state premier Stefan Mappus, accusing him of being a hardliner. 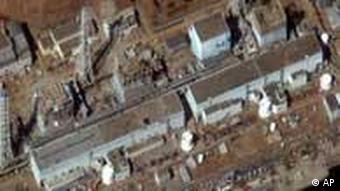 Shortly before the state vote, came the Japanese earthquake and tsunami and the subsequent nuclear leak at Fukushima that brought fresh doubts about nuclear power – especially in a Germany that was already skeptical about the technology.

A perceived lack of transparency over nuclear policy and lobbying in Berlin, together with the feeling that Kretschmann was a credible figure, helped to deliver the victory that the Greens enjoyed on Sunday. But reflecting on the victory, Kretschmann took a more long term view.

"We have had a difficult task over the last 30 years and finally it has paid off because these themes have taken center stage. Certainly, many people gave us their vote because of that."

As the state premier, Kretschmann will have the power to put some of the party's principles into practice. However, the joy of victory is also tinged by sadness at the fact that Fukushima helped bring it about. But Kretschmann has said that such catastrophes can bring about a change in the attitude towards, and future of, nuclear power.

"Chernobyl brought about a change and, for that reason and from my point of view, it's really time that something here changes."

From radical opposition to mainstream party: The rise of the Greens

Germany's Green party meets for its annual conference this weekend. It originally set out to be the anti-party party. Now, 30 years later after the party was founded, they're a force to be reckoned with. (19.11.2010)