Will tourism in the Philippines recover from coronavirus? | Asia | An in-depth look at news from across the continent | DW | 12.01.2022

Will tourism in the Philippines recover from coronavirus?

Just as the Philippines began to recover from two years of pandemic misery, Typhoon Rai ravaged its tourism-dependent remote islands. Residents say their future will be bleak if tourists don't return soon. 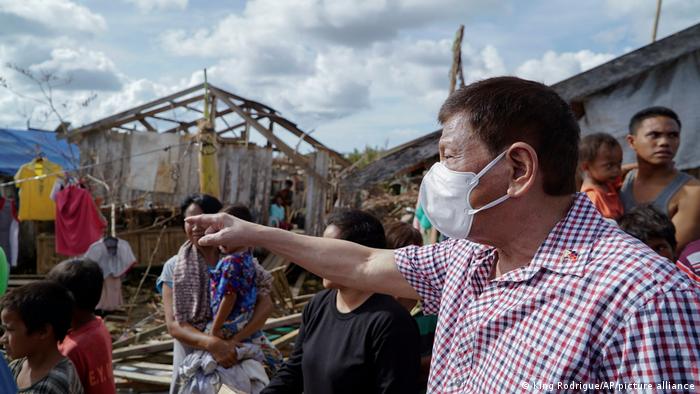 President Rodrigo Duterte inspects Siargao island, where tourism has been shattered by Typhoon Rai and the coronavirus pandemic

Tourism in the Philippines was just starting to bounce back after nearly two years of pandemic measures when Typhoon Rai raged through the Southeast Asian archipelago last month, devastating vast swaths of land.

The category 5 super typhoon battered the central and southern Philippines, leaving at least 402 people dead and more than 1,200 injured, and displacing over 630,000.

The cost of damage on Siargao island alone is estimated to be $391 million (€344 million).

Siargao is a popular surfing destination and, like many remote island destinations in the Philippines, depends on tourism as a primary source of revenue.

Residents, who have only recently begun to recover following strict COVID lockdowns, were left devastated.

"We are back to rebuilding the whole island. There is nearly nothing left,"  Alfredo Coro II, vice mayor of the Del Carmen municipality in Siargao, told DW.

"Right now we are still figuring out how to survive until the next meal, with typhoon season typically lasting until mid-March. We have to act fast to be ready for the next typhoon season in November," he said.

Located in the Pacific's seismically active Ring of Fire, the Philippines is one of the world's most disaster-vulnerable countries. Along with regular volcanic eruptions and earthquakes, the island nation experiences about 20 typhoons  and storms each year.

Melot Abejo, the owner of a resort and spa in Siargao, told DW that two years of pandemic lockdowns were "painful."

Before Typhoon Rai lashed the island, people who wanted to escape pandemic confinement in the cities went to Siargao for a "quarantine experience in paradise," Abejo said.

Abejo was cautiously optimistic when the government permitted domestic travel in October, only to be left disappointed again following Typhoon Rai.

"Just when tourism in Siargao started picking up again, we are again back to zero," she said.

Prior to the coronavirus pandemic, the tourism industry represented 13% of the national GDP in 2019 and employed millions of people, according to government statistics.

Tourism industry earnings, however, nosedived 82% at the height of the pandemic, with arrivals plummeting from 8.26 million in 2019 to just 1.48 million in 2020, the Department of Tourism (DOT) reported.

"The major challenge in rebuilding is our precarious financial position because we lost so much over these long two years," Abejo said.

The future also looks grim for Jofelle Tesorio and her family.

Tesorio's mother has been running Tarabanan Cottages in Palawan for almost 20 years. The rustic resort serves both as their family home and an important source of income.

The cottages used to attract tourists seeking an off-the-grid experience from all over the world.

The pandemic and Typhoon Rai, however, slashed the family's monthly income from $600 to $100.

"Typhoon Rai hit us in the gut," Tesorio told DW, adding that there was still no electricity.

"How will we rebuild when the pandemic tore through our savings? We can't take out a loan because income is so unstable. With our resort gone, we don't have any form of collateral," she added.

Some former guests of the resort have supported the GoFundMe page Tesorio set up to help with the costs of reconstruction.

"It will take us years to recover," Tesorio said.

Worldwide, tourism revenues are not expected to go back to pre-pandemic levels until 2023, the International Monetary Fund has estimated.

At the onset of the pandemic, the DOT offered low-cost loans for businesses to survive the tourism slump.

But the threat of new coronavirus variants such as omicron and natural disasters, have posed additional challenges to the tourism sector over the past two years, especially for small and medium-sized businesses.

"With international tourism borders closed for much of 2020 and 2021, we focused on strengthening the domestic tourism industry. We are still looking at domestic tourism as our main growth driver this year," she said.

"It is perfect for traveling during the pandemic," she said, "as people prefer seclusion and exclusivity."