Unlike most other countries, the Philippines has decided to keep schools closed for another year to contain COVID-19. Rights advocates warn millions of children without internet access are missing out on an education. 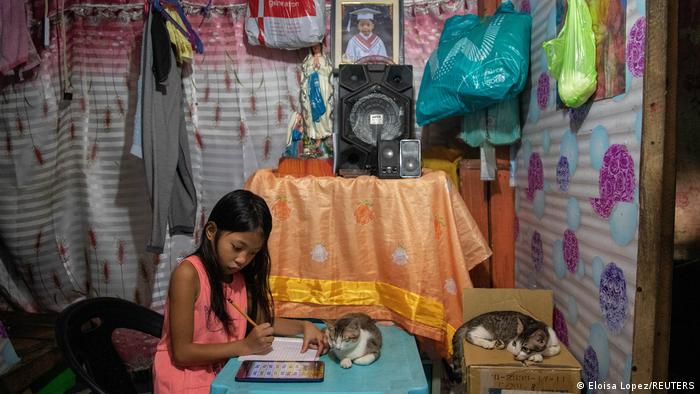 Schoolchildren in the Philippines are facing another year of distance learning

As schools around the world gradually welcome back students, the Philippines has decided to keep schools shuttered for another year as the country struggles to control spiking COVID cases.

The Philippines is one of the only countries in the world where schools have continuously remained closed since the coronavirus pandemic began last year.

President Rodrigo Duterte vetoed a proposal to try out in-person classes in low-risk areas, over fears that children who are not eligible for vaccination could infect parents and older family members.

The government's decision was met with protest from teachers and children's rights groups, who said that the prolonged school closures will have long-term consequences on children's education and development.

When the pandemic hit the Philippines last year, the government rolled out a distance learning program allowing students to attend classes either online or by using printed self-study learning modules.

ACT said the year of distance learning has increased an education gap for children in poor and rural areas.

According to government statistics, only about 18% of households in the Philippines have an internet connection at home. Internet penetration is even lower in rural areas.

"Many teachers have resorted to setting up kiosks outside their homes so they could still guide and teach their students. What else is there to do when your students live in areas where there is no internet or even electricity?" Basilio said.

"If we don't do this, we will have a generation of children who do not know how to read and write," he added.

In a statement, the Child Rights Network, a coalition of children's rights advocates, said the quality of education in the Philippines brought about by school closures is a "learning and child development catastrophe" waiting to happen.

The National Economic Development Authority (NEDA) estimated that prolonged school closures could result in an estimated productivity loss in the Philippines equivalent to €187 billion ($219 billion) over the next 40 years, corresponding to an individual's life span in the labor force.

According to a UNICEF study, more than 80% of parents said their children show slower learning improvement when studying from home.

Tales out of school

In the southern Philippine province of Siargao, some 762 kilometers (470 miles) from Manila, the local government assessed the proficiency levels of elementary students in 20 public schools in the municipality of Del Carmen. The results showed proficiency levels in math and English of as low as 22%.

﻿The results were alarming but not surprising said Alfredo "Jr" Matugas Coro II, vice mayor of Del Carmen. "Only face to face teaching works. This data shows that there is more harm in not opening schools in low risk areas," he told DW.

The year of school closures has put such children at higher risk for dropping out of school entirely and social isolation, he said.

"For many kids with disabilities, schools and their teachers are their only form of social interaction with others," said David, who is also a member of Philippines Department of Education advisory forum.

However, some parents have supported the government's move to keep schools closed, as delta variant-driven COVID cases continue to rise.

"I would really love for my kids to go back to school but the situation is so bad. I think keeping the schools closed for now is one of the few right things government did," Megi Garcia, a mother of two, told DW.

The Department of Education recorded 26.3 million students enrolled for the current school year, surpassing numbers from the previous year.

The department has rejected "sweeping statements" about a generation of illiterate children caused by distance learning.

"We acknowledge the learning losses, but we should not turn a blind eye to the learning gains such as the recovery of household involvement in learning and the actions of local government in augmenting digital platforms," Nepomuceno Malaluan, undersecretary with the Education Department, told DW.

Malaluan added that it was misleading to compare countries that have not resumed face-to-face classes with those that have.

"It gives the perception that schools are open full scale, uninterrupted, without problems, and have fully addressed learning gaps. There are numerous incidents in various countries where face-to-face classes become a contributing factor to outbreaks. These too have consequences for education," he said.

A report showing a three-year surge in the online sexual exploitation of children has a children's advocacy group concerned that the coronavirus crisis will make matters worse. Ana P. Santos reports from Manila.