Why is the UK′s Nationality and Borders Bill so controversial? | Europe | News and current affairs from around the continent | DW | 14.12.2021

Why is the UK's Nationality and Borders Bill so controversial?

There's outrage about a new bill that grants more powers to the UK government to remove British citizenship without notice. The new measures are part of an overhaul of the UK's controversial immigration rules. 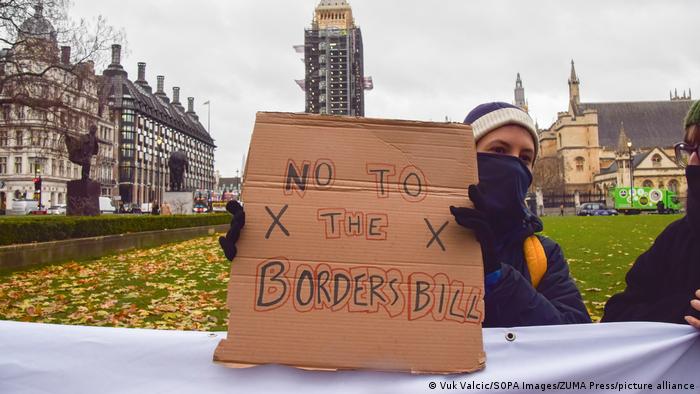 What is the Nationality and Borders Bill?

In 2014, these powers were extended to include foreign-born British citizens without dual nationality, who can be made stateless so long as the government believes they are eligible for foreign citizenship and if they have acted "in a manner which is seriously prejudicial to the vital interests of the United Kingdom, any of the Islands, or any British overseas territory," according to the legislation.

What does the Clause 9 amendment mean?

Clause 9 of the Nationality and Borders Bill, which was added in November, essentially paves the way for the government to strip individuals of their British citizenship without prior notice on practical grounds, for example if authorities do not have a person's contact details, in the interests of national security or "in the public interest."

Here is the relevant passage highlighting the amendments to the Nationality and Borders Bill regarding the "Notice of decision to deprive a person of citizenship."

In section 40 of the 1981 Act (deprivation of citizenship), after subsection (5) (which requires notice to be given to a person to be deprived of citizenship) insert "(5A): Subsection (5) does not apply if it appears to the Secretary of State that —

(a) the Secretary of State does not have the information needed to be able to give notice under that subsection,

(b) it would for any other reason not be reasonably practicable to give notice under that subsection, or

(c) notice under that subsection should not be given —

(i) in the interests of national security,

(ii) in the interests of the relationship between the United Kingdom and another country, or

(iii) otherwise in the public interest."

There are concerns that Clause 9 will disproportionately target ethnic minority Britons and make them feel unsafe and unwanted.

"It will apply to only a small number of people, but [like previous legislation, mainly in the field of counterterrorism targeting British Muslims] has a ripple effect on entire communities, diminishing their sense of security. It also emboldens the far right and could lead to more anti-Muslim racial violence, as it tells the population that Muslims are a dangerous enemy requiring special measures," Frances Webber, vice-chair of the UK's Institute of Race Relations, told DW via email.

A precedent was set in 2019 in the case of Shamima Begum, a UK-born woman of Bangladeshi descent, who joined the "Islamic State" group as a teenager and had her British citizenship removed at the age of 19 on national security grounds.

At the time, the government argued that, despite Begum not having a foreign passport, she would not be made stateless. Bangladesh considers anyone born to a Bangladeshi parent to be a citizen from birth until the age of 21.

In a statement, the UK's Home Office said: "There are inaccurate interpretations being reported on administrative changes to deprivation powers in the Nationality and Borders Bill. Removing British citizenship has been possible for over a century, and is used against those who have acquired citizenship by fraud, and against the most dangerous people, such as terrorists, extremists and serious organised criminals. This change is simply about the process of notification and recognizes that in exceptional circumstances, such as when someone is in a war zone, or informing them would reveal sensitive intelligence sources, it may not be possible to do this."

The amendment has triggered enormous outrage, not only from human rights groups, who say that aside from creating major obstacles to people seeking asylum, it blatantly contravenes the UK's obligations to the UN's Refugee Convention and the European Convention on Human Rights, a claim which the UK government strongly denies.

This is what people have been saying about it online as it was passed in the House of Commons last week:

Impact on immigrants and asylum-seekers

The bill, which passed a Commons vote last week and will be debated by Parliament's upper house, the House of Lords, on January 5, also aims to tackle illegal immigration and inadmissible asylum claims made by undocumented people. Some critics and human rights groups say it would criminalize them and anyone taking part in refugee rescue missions in the English Channel. Border force staff would be granted immunity if people die in the English Channel during so-called pushback operations. However, the Home Office points out that that is not the case and says individuals and organizations will be able to continue to rescue those in distress at sea without repercussions.

The UK's Joint Committee on Human Rights (JCHR) says the bill breaches human rights law and the Refugee Convention and has called on the government to address those measures that are incompatible with human rights.

While those deprived of citizenship are mainly British Muslims from South Asia, the Middle East or North Africa, the measures could also be felt by EU citizens.

In particular it could effect the admissibility of asylum applications from EU countries, for example, "preventing Roma from eastern Europe from claiming asylum despite treatment which would qualify them as refugees," said Webber.

This article was amended on December 15 to include a new statement from the Home Office and correct the passage regarding the persecution of those taking part in refugee missions.

A British plan to offer millions of Hong Kongers a path to British citizenship will take effect on Sunday. The UK government believes the new visa program could attract over 300,000 Hong Kongers to Britain.

The response to the tragic drownings on the English Channel has spiraled into a political spat between France and the United Kingdom, delaying proactive solutions to prevent future tragedies.

The former IS member argues her human rights are being breached in preventing her from returning home to fight the decision to strip her of her British citizenship. She is now living in a camp in Syria.