Why is Japan obsessed with KFC on Christmas?

Like other Western customs, celebrating Christmas has become popular in Japan. But forget about the roasted turkey — fast-food chicken is an essential part of any Japanese Christmas celebration. 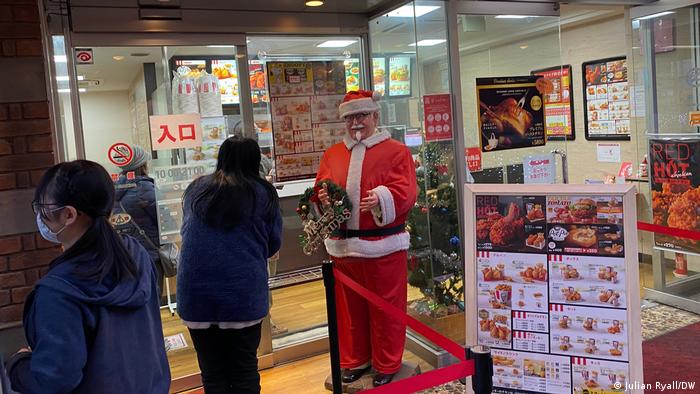 Takako Tomura's Christmas party this week has all the festive trimmings. Children decorate a pine tree with tinsel and hand-made decorations, as adults toast mulled wine and everyone exchanges gifts.

Then the families sit down to enjoy the traditional Japanese Christmas meal — mounds of Kentucky Fried Chicken.

As with other foreign celebrations, such as Halloween and Valentine's Day, Japan has embraced Christmas with gusto — although the religious elements are largely overlooked in a nation where only 1% of the population is Christian.

Instead, Christmas Eve is considered one of the most romantic days of the year in Japan, and high-end restaurants and hotels are typically booked months in advance. And although coronavirus has put a damper on a romantic Christmas Eve this year, the windows of department stores are still full of gifts for significant others.

Many Japanese children believe in Santa Claus, and will find a present beneath their Christmas tree, despite the lack of chimneys in Japan. Then they have to go to school, as December 25 is still a school day.

All these traditions are direct imports from the West, although there are undoubtedly some lost-in translation moments, such as the Tokyo department store that displayed a Santa Claus nailed to a cross in its window.

Making Christmas magic in the year of the pandemic

However, the Japanese Christmas tradition of ordering KFC for the holiday meal is a particularly curious custom for Westerners, who might balk at the idea of feasting with fast-food chicken.

"We always order KFC at Christmas because that is what my parents used to do when I was young," said Tomura, a 40-year-old housewife from Yokohama.

"It was always a bit of a treat when I was young as we didn't go out to restaurants so often back then. And KFC seemed foreign and exotic," she added.

Fifty years of KFC in Japan

The story behind KFC's near monopoly on the fast-food Christmas feast dates back to 1970, according to the company. When the first KFC outlet in Japan opened its doors, it was popular with foreigners who had not acquired a taste for Japanese cuisine.

The manager of the restaurant, Takeshi Okawara, overheard some foreigners bemoaning the fact that it was impossible to get turkey in Japan to celebrate Christmas. Okawara came up with the idea of a "party barrel" that could be sold in the run-up to Christmas, with chicken serving as the substitute for the traditional turkey.

By 1974, the company's Christmas campaign had gone nationwide under the slogan "Kentucky for Christmas."

It became a national phenomenon, in part because the Japanese were still slightly unsure about the protocols surrounding this foreign holiday, but they knew all about KFC.

Combined with a clever marketing campaign, and Colonel Sanders' recipe for fried chicken is now synonymous with a festive Japanese Christmas.

The colonel himself gets into the spirit of things, with the life-size statues that are outside every store in the country dressed in a Father Christmas costume.

Okawara's bright idea was also a hit with the company and he quickly rose through the KFC ranks, serving as president of KFC Japan from 1984 to 2002. "I remember my father bringing a 'party barrel' home when I was a teenager in the early 1970s and thinking how different and exciting it was," said Tomoko Ooko, 67, a housewife from Saitama Prefecture, north of Tokyo.

"Even now, KFC restaurants can be found anywhere in Japan, but I never eat there and my family only orders take-out at Christmas," she said.

"It has become a tradition in our house now, even though I have heard that they do not eat KFC in other countries for Christmas. I was surprised when I heard that."

KFC is celebrating 50 years in Japan this year and has substantially expanded its Christmas offerings over the decades.

The "Barrels” have evolved into specially produced boxes with chicken, wine and cake that are enough to feed an entire family.

About 10 years ago, McDonald's Japan attempted to take a bite out of KFC's Christmas market with a similar campaign designed to woo fast-food lovers. Even though McDonalds has more outlets across the country, Christmas diners largely stayed loyal to KFC and a 50-year-old tradition.

Tokyo by Taxi: REV rides along with Tamaki