Why is a crisis unfolding in Ceuta?

The crisis unfolding on the Spanish-Moroccan border over migrants likely has its roots in a long-running conflict that lies about 2,000 kilometers (1,242 miles) away. DW explains what's behind it. 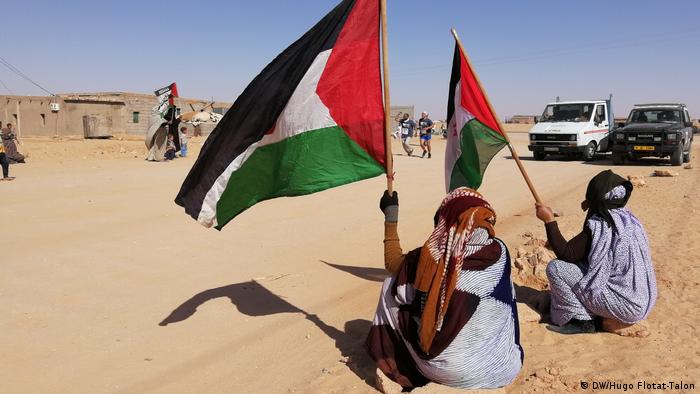 Celebrating 43 years of the Saharan Arab Democratic Republic in 2019

What is the crisis between Spain and Morocco about?

It's not entirely certain because Morocco hasn't made any clear statements on the matter. However, Morocco's minister for human rights, Mustapha Ramid, previously criticized Spain's behavior on Facebook, saying that the country was offering refuge to a group that had taken up arms against his country. Most likely, he meant Polisario Front leader, Brahim Ghali, who has been receiving medical treatment for COVID-19 in northern Spain since mid-April.

The Polisario Front is an independence movement that claims territory in the Western Sahara region, an area that Morocco says belongs to it.

It is believed that Moroccan authorities deliberately reduced the number of military forces on this heavily guarded piece of land in the coastal colony of Ceuta on Morocco's border after Ghali was taken to Spain. This week, Spain's highest court issued a legal summons for Ghali pertaining to a possible war crimes case.

What is Morocco so worried about?

The Moroccan government is concerned because an EU member state is treating Ghali. It had hoped for more international recognition of its claim over Western Sahara after former US President Donald Trump said he would recognize it last December. The US recognition was seen as part of a deal in which Morocco established diplomatic relations with Israel. Because of Spain's actions with Ghali, Morocco is concerned that its claim to sovereignty over the Western Sahara region will be questioned again.

Where does Germany stand in all this?

Morocco is also at odds with Germany over the Western Sahara. At the beginning of May, the North African country recalled its own ambassador from Berlin, saying it was doing so because of  "hostile" actions by Germany. Previously, Germany had been critical of the Trump administration's decision to recognize the Moroccan claims over Western Sahara. It had called a meeting of the UN Security Council to discuss the matter.

How did this conflict begin?

The tensions date back to 1884. As part of the so-called Congo Conference, large parts of Africa were divided between the European colonial powers of the time. Back then, the area now known as Western Sahara came under Spain's sphere of influence. In 1976, Spain began to withdraw from the region. Following this, Morocco and Mauritania both claimed the territory. In 1979, Mauritania renounced its claims and Morocco occupied the southern part of Western Sahara.

What is the Polisario Front?

As increasing numbers of Moroccans came to settle in the area during the 1970s. The Polisario called the area the Saharan Arab Democratic Republic (DARS). The armed conflict with the Moroccan army began in 1975. The Polisario Front is supported by neighboring Algeria, which is also home to many refugees from Western Sahara.

In 1991, a ceasefire between the two was arranged and this has mostly held up until today. The first serious break in the ceasefire came late last year.

Why is Western Sahara so important?

The region is rich in mineral resources, including some of the largest phosphate deposits in the world. Around 72% of all known phosphate reserves are there. Before the 1991 ceasefire, Morocco had started to build a border wall. The result is that much of those mineral deposits are now in Moroccan-controlled territory.

What is Western Sahara's legal status?

DARS is currently recognized by about 50 states as well as the African Union (AU). It is usually described as a "non-self-governing territory." In fact, it has been a member of the AU since 1984, which prompted Morocco to withdraw from the union that same year. It returned to the AU in 2017.

Various plans have been proposed to resolve the stand-off about DARS' legal status, including a Moroccan offer to make it an autonomous region within Morocco. The United Nations Mission for the Referendum in Western Sahara was originally dispatched to the area to organize a referendum for the people living there, so that they could decide their own fate. Negotiations continue as to what a reasonable resolution to the ongoing impasse might be.

Thousands of migrants spent the night in shelters after arriving in the Spanish city. Spain and the EU are pointing fingers at the Moroccan border authorities.