Why are tensions increasing between China and Taiwan? | Asia | An in-depth look at news from across the continent | DW | 07.10.2021

Why are tensions increasing between China and Taiwan? 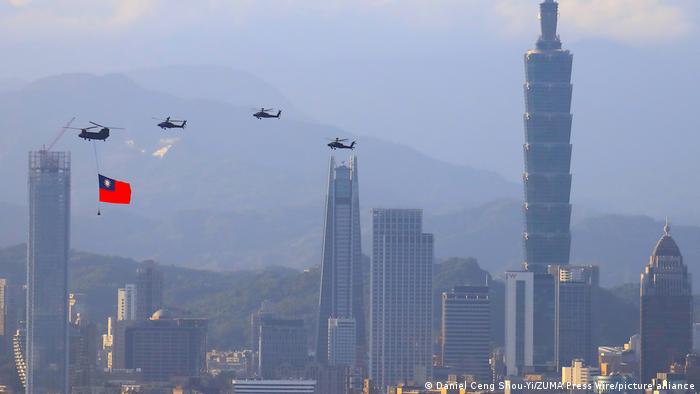 China's military flew tens of fighter aircraft as many as 149 times toward Taiwan in recent days, in what is the most recent attempt at putting pressure on the self-governing island by displaying Beijing's military might.

Even though all flights were in international airspace, they prompted Taiwanese defense forces to scramble jets in response and raised fears that any miscalculation could lead to an inadvertent escalation.

Taiwan's defense minister described the current situation as the most severe in 40 years.

"It's been the toughest situation in 40 years of my military life," Defense Minister Chiu Kuo-cheng told parliamentarians on Wednesday.

The comment was made a day after Taiwan's President Tsai Ing-Wen warned of "catastrophic consequences" if the self-ruled island falls to Beijing and stressed that Taiwan will do whatever it takes to defend itself if its democracy and way of life are threatened.

The sorties come as China faces greater pushback from countries in the region and an increasing naval presence from the US and other Western democracies in Asia as Taiwan pleads for more global support and recognition.

Beijing views Taiwan as a Chinese province that split from mainland China amid civil war in 1949. And China has increasingly mobilized military, diplomatic and economic pressure to undermine Tsai's independence-leaning administration while threatening to bring the island under Chinese Communist Party control.

"We don't know the reason behind it, but the intensity of military exercises could increase the chances of incidents that would start a war," he said, warning that Taiwan should be careful in its response to Beijing's provocations.

Still, some experts say the risk that the latest tensions could spiral out of control remains low.

"We should not only focus on the number of aircraft, but the type of fighter jets," Lin Ying-yu, an assistant professor of Asia-Pacific affairs at Sun Yat-sen University, told DW.

For instance, if the PLA sends KJ-500, a third-generation airborne early-warning and control aircraft, to Taiwan's air defense identification zone, it could be "alarming, but is still too arbitrary to say from these signs whether China will invade Taiwan," Lin said.

Taiwan not an urgent issue for Beijing?

Wen-Ti Sung, a lecturer of Taiwan Studies at Australian National University, told DW that China currently has neither the military capability nor the political will to launch a full-scale military attack against Taiwan.

He said Taiwan was an important issue, but not an urgent one for China.

Sung added that the Chinese leadership is currently more focused on dealing with domestic issues such as the upcoming sixth plenum of the 19th Communist Party of China Central Committee and the 20th party congress, which is set to seal the deal in terms of President Xi Jinping's and his era's place in the party history.

"Also, the economic goal of 'common prosperity' is a priority," Sung said.

What makes more sense for China is to remain strategically patient and wait until the military balance is more favorable to Beijing before considering the option of unification by force, the expert underlined.

Lin, the assistant professor, also believes that ​​starting a war is the last choice for China. He stressed that shaping Taiwan's view on China, the CCP and unifying the island peacefully with the mainland is Beijing's preferred choice.

Why Taiwan is falling in love with Lithuania

'It is a routine already'

Despite fears of an inadvertent military escalation between the two sides, the Taiwanese people appear not too worried about the situation.

"China's provocations are obvious. It seems like your neighbor firing toward your backyard — I am not scared but feeling angry," 36-year-old Joyce Huang told DW. She added that, the more fighter jets China sends, the more hostility Taiwanese people would feel.

People in Taiwan have been used to China staging military exercises in the island's vicinity since Tsai Ing-wen took office in 2016.

"It is a routine already. They usually deliver the 'performance' during big days. I am not scared because it happens too frequently," Huang said.

A middle-aged Taiwanese woman said she hoped that Taiwan and China would be able to get along with each other peacefully. "We don't need to seek independence, just keep the status quo," she said.

Sung, the China-Taiwan relations expert, said the Taiwanese People were used to this type of low-intensity Chinese military provocations. "They have been living in the near-constant presence of Chinese military and diplomatic pressure for over a quarter century since Taiwan held its first direct presidential election in 1996," he said.