The Russian president was invited when US President Donald Trump telephoned to congratulate him on his election victory in March. The time and place of the encounter have yet to be agreed. 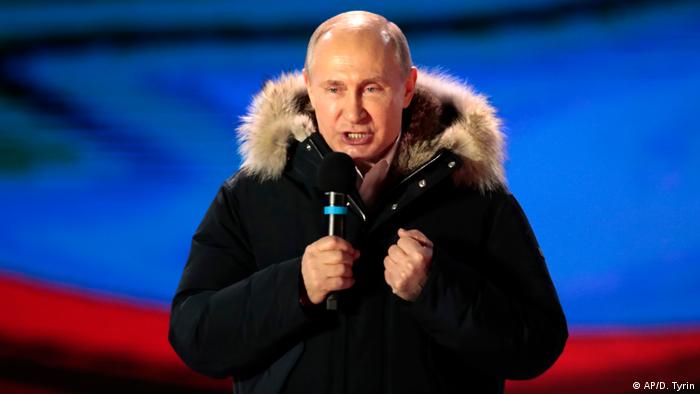 "As the president himself confirmed on March 20, hours after his last call with President Putin, the two had discussed a bilateral meeting in the 'not-too-distant future' at a number of potential venues, including the White House," Sanders said. The administration had no further comment on the matter, she said.

The Kremlin's foreign policy aide, Yuri Ushakov, told reporters on Monday that Trump had suggested meeting at his official presidential residence and workplace in the US capital: "When our presidents spoke on the phone, Trump suggested having the meeting in Washington at the White House," Ushakov said. "This is quite an interesting, positive idea," he added. Trump congratulated Putin on his election victory during their phone call

Planning for the visit was interrupted by the expulsion of Russian diplomats from the US and other Western states following the poisoning of former spy Sergei Skripal and his daughter in England. The US has supported the UK's claim that Russia was responsible for the poisoning with a military-grade nerve agent. Russia denies the accusation.

Tensions also continue with the US investigation into alleged meddling by Russia in the 2016 presidential election.

"I hope the Americans won't abandon their proposal to discuss the possibility of holding the summit," Ushakov said on Monday. "There was no time for discussion and there wasn't even anyone to discuss it with," Ushakov said, adding he hoped that "serious and constructive dialogue" could now start.

Trump met with Russian Foreign Minister Sergey Lavrov at the White House last May. The talks were in preparation for Trump's meeting with Putin, which took place at the Group of 20 summit in Hamburg in July 2017.

Putin's words of praise for US President

Putin lauds Trump: 'No disappointment at all'

The Russian president has praised his US counterpart's communication skills and willingness to compromise. He then joked about trying to recruit Melania Trump as a Russian spy. (07.03.2018)