Tennis fans at the Australian Open are free to wear 'Where is Peng Shuai' T-shirts as long as they are not 'disruptive,' organizers have confirmed. The event had faced criticism after fans were asked to remove them. 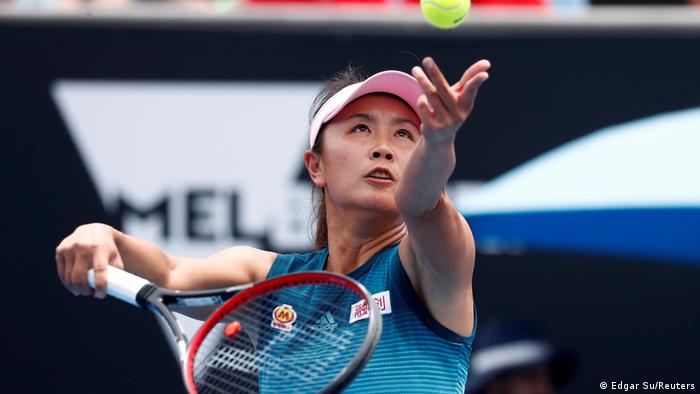 Peng Shuai disappeared for three weeks in November, prompting concern and protests within tennis and beyond

Tennis Australia (TA) has confirmed that fans at the Australian Open are allowed to wear T-shirts bearing the slogan "Where is Peng Shuai?" as long as they do not cause disruption.

The move comes after video footage showed fans being asked to take off their T-shirts by security on the grounds that the slogan constituted a "political" message, a stance which tennis great Martina Navratilova had slammed as "pathetic" and "cowardly."

But TA chief Craig Tiley said on Tuesday that there had been "a lot of miscommunication and lack of understanding" regarding the whole issue.

"Someone wearing a T-shirt saying something is not going to have any impact on safety," he told Reuters. "But when they start getting together as a group, as a mob, and start being disruptive, in any way or form, that's a different thing.

"If they're coming in to do what everyone else is doing - to enjoy the tennis - and if they've got a T-shirt on that says 'Where is Peng Shuai?', that's fine."

Where is Peng Shuai?

Chinese doubles player Peng Shuai appeared to go missing in November 2021 after alleging on social media that former Chinese vice premier Zhang Gaoli had sexually assaulted her in the past.

Her post on Chinese social network Weibo was subsequently deleted and the 36-year-old wasn't seen or heard from for nearly three weeks, prompting concern in the tennis community and beyond.

Peng released a statement in December insisting she was fine and withdrawing her allegations, but the Women's Tennis Association (WTA) expressed doubts over its authenticity and suspended its tournaments in China.

Tennis Australia's apparent ban on T-shirts highlighting Peng's plight seemed a markedly different approach, as video footage emerged over showing fans being approached by stewards, who also appeared to have confiscated a banner.

Navratilova: Rule is 'cowardly' and 'pathetic'

TA confirmed that the t-shirts contravened tournament regulations on political messaging but, after the footage went viral on social media, Navratilova tweeted that the rule was "pathetic."

Speaking to American broadcaster Tennis Channel later, she expanded: "I find it really, really cowardly. I think they are wrong on this. This is not a political statement; this is a human rights statement."

By Tuesday, Tennis Australia had come to the same conclusion and permitted the T-shirts.

Following a social media backlash on Monday, Tennis Australia said it understood that "people have strongly held personal and political views on a range of issues."

The organization insisted that "Peng Shuai's safety is our primary concern. We continue to work with the WTA and the global tennis community to do everything we can to ensure her well-being. Our work is ongoing and through the appropriate channels.

"To ensure that the Australian Open remains a welcoming, safe and inclusive event for everyone, we have a longstanding policy of not allowing banners, signs or clothing that are commercial or political."

However, tennis fans concerned about Peng Shuai said they are planning to hand out 1,000 more T-shirts at Melbourne Park this week after raising over $10,000 on a GoFundMe page. "Let's see how many match-goers they can stop," one activist told broadcaster ABC.

Asked about the issue at a daily press conference, China's Foreign Ministry said it "opposed the politization of sports, which is unpopular and will not succeed."

The US is demanding proof that Peng Shuai is safe. The Chinese tennis player went missing after making sexual assault allegations against a top Communist Party official.