What Hollywood got wrong about the gladiators of ancient Rome | Culture | Arts, music and lifestyle reporting from Germany | DW | 16.09.2020 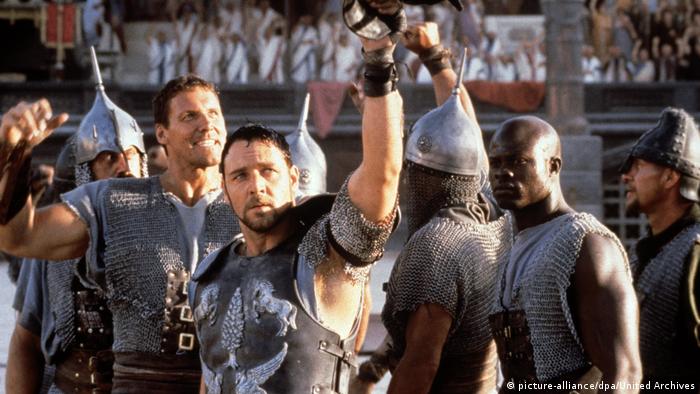 Many people's image of gladiators come from films, such as Ridley Scott's 'Gladiator'

Anyone who has seen films like Mervyn LeRoy's Quo vadis? (1951), Stanley Kubrick's Spartacus (1960) or Gladiator by Ridley Scott (2000) is familiar with the images of the Roman fighters destined for either glory or death as they entertained crowds with violent combats.

Now, a new exhibition at the Archaeological Museum Hamburg titled "Gladiators - Heroes of the Colosseum" gives visitors a chance to step into gladiator gear and catch a glimpse of their experience.

Picking up a sword and putting on a fun costume is however only one aspect of the exhibition, which aims to question the superficial knowledge gained from movies and dig deeper into the lives of gladiators of ancient Rome.

The director of the museum, Rainer-Maria Weiss, told DW he wanted to bring historical facts to the forefront and ask hard-hitting questions about this bloody sport: "What does the pictorial tradition say about real life? What do bones, or rather studies about buried gladiators, say about their lives, about their diet, etc?"

The first documented gladiator fights took place in Rome in 264 BC. At the time, descendants of a deceased person had three pairs of slaves compete against each other in the honor of their dearly departed. Typically, the fight would happen in a marketplace, not an enclosed venue.

Throughout the course of history, these private battles of nobility became increasingly popular among citizens of ancient Rome, and emperors had a hand in organizing them as a form of entertainment.

Under Emperor Augustus (63 BC - 14 AD), fights were allowed only during a few specific days a year. "The real gladiator fought three or, if it came down to it, four fights a year. In between, gladiators lived and trained in gladiator schools, which you can imagine as a boarding school," Weiss says.

Fighting by the rules

The typical schedule of a fight day also hails back to Augustus, who is responsible for integrating animals into the program. Around noon, executions of criminals sentenced to death typically took place. Afterward, circus acts would sometimes take the stage to cheer up the audience. After a few additional fights, the gladiators were presented as the main act. 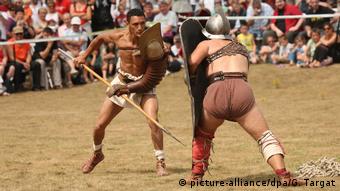 A program revealed ahead of time who would be competing and in which pairing, so spectators could eagerly anticipate their favorite gladiator.

Needless to say, the gladiator battles were the day's highlight. Fighters didn't simply wave their swords around aimlessly: There was a complex set of rules and a referee who made sure they were obeyed. "This is something that we do not have in our collective imagination at all. There is never a referee who says 'Attention, the leather strap has come loose, give him time to fix it.' Or: 'Attention, he is turning around and taking a breath. You can't stab him now,' and so on," explains Weiss.

Although a draw was the rarest outcome of a fight, not as many gladiators died as is commonly thought. According to Weiss, it isn't true that one person per fight had to lose their life: "That was an exceptional case, because the fighters were highly trained, respected and really expensive experts, just like today's boxers or wrestling stars who are known by name and who have their fans." Some, however, did die in a fight if they gave up, for example, and if the audience or emperor refused to pardon them.

A famous arena: the Colosseum in Rome

While the gladiatorial games were initially held in marketplaces and large urban areas — not only in Rome, but also in Pompeii and elsewhere — fights soon took place in amphitheaters.

The Roman Colosseum is the most famous of such venues. This building, commissioned by Emperor Vespasian in the 1st century AD, could accommodate up to 50,000 spectators. 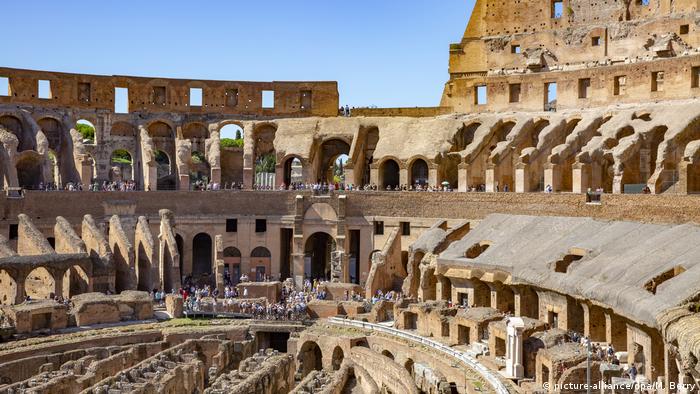 The Roman Colosseum was once the location of gory battles, which often involved animals

Even today, the ruins bear witness to its former splendor. Each year millions of tourists visit the ancient site. (In 2020 due to the coronavirus, it was closed for two months, and access is currently severely restricted.)

Between underdog and hero

Gladiators were by no means only prisoners or slaves. Gladiator schools ensured that there was a large supply of highly trained fighters and many "free citizens" also joined. 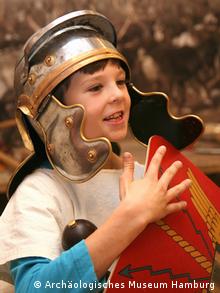 The exhibition is also interesting for children

The most famous gladiator school was in Pompeii, but there were also others in Trier, Cologne and Xanten and of course in Rome. The schools molded men into professional warriors; real heroes who embodied Roman virtues.

What may be surprising to many is that women also fought against each other. This topic is touched upon in the Hamburg exhibition. "This did not fit into the Roman worldview, which is why they [the fights, editor's note] were probably hushed and officially banned in the year 200," says Weiss. An imperial prohibition suggests that there must have been many such fights, he points out. In Roman culture, a woman's role was that of an admirer or lover, not a fearsome fighter.

The exhibition aims to do away with the image of the bloodthirsty gladiator, ready to slay at a moment's notice — the Hollywood depiction, so to speak.

Although there is plenty of interest in the topic of gladiators, most of us "have the wrong picture in mind," says Weiss. "It's similar to the way we think Vikings always wore helmets with horns. But there is not a single Viking with horns," explains Weiss.

Artifacts, reconstructions and interactive elements in the Hamburg exhibition are intended to help convey the gladiatorial existence as it was portrayed in reality, while not forgetting that death and bloodshed were part of the picture.

The exhibition "Gladiators - Heroes of the Colosseum" runs from September 16, 2020 to February 28, 2021 in the Archaeological Museum Hamburg.

To celebrate Stanley Kubrick's cinematic milestone from 1968, the German Film Museum is presenting an exhibition devoted to the masterpiece that explored the themes of artificial intelligence and existentialism.