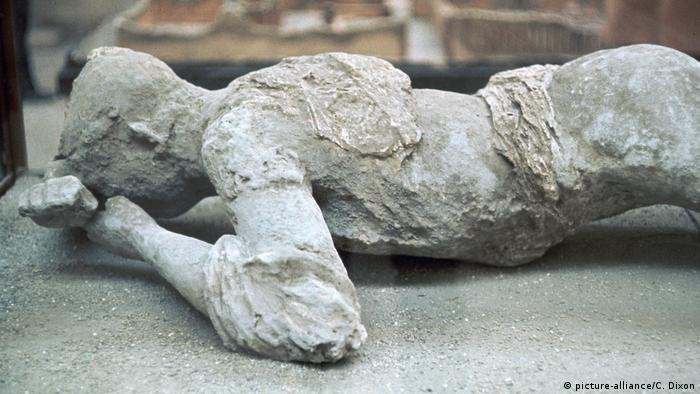 The eruption of Mount Vesuvius turned an ancient victim's brain into glass, according to Italian anthropologists.

The finding, dubbed as "sensational" and published on Thursday in the New England Journal of Medicine,  marks the first time that scientists have verified such a phenomenon.

The ruins of Herculaneum

The verified fragment, which looks like a black and shiny piece of rock, is part of the brain of a victim that exploded in Italy in AD 79. The eruption of Vesuvius instantly killed all of the inhabitants of Pompeiiand neighboring Herculaneum. It also buried an area over 20 kilometers (12 miles) from the explosion in up to 16 meters (50 feet) of ash, which solidified and preserved the remains resulting from the eruption.

Archaeologists rarely recover human brain tissue, and when they do it is normally of a smooth and soapy consistency, according to the report.

The remains of a man found lying on a wooden bed were discovered in Herculaneum in the 1960s. He is believed to have been the custodian of the College of Augustales, a place of worship that was at the center of the cult of Roman Emperor Augustus.

The glassy substance found inside of the victim's skull has long captivated researchers who studied the remains of victims trapped by lava and toxic gasses following the eruption.

The team of researchers confirmed that the victim's brain had been vitrified, a process by which tissue is burned at such a high temperature that it turns into glass. Researchers believe that the temperature rose to 520 degrees Celsius (968 degrees Fahrenheit), followed by a rapid drop in temperature which helped vitrify the remains.

"The high heat was literally able to burn the victim's fat and body tissues, causing the brain to vitrify," said the archaeological site of Herculaneum in a statement. "This is the first time ever that vitrified human brain remains have been discovered resulting from heat produced by an eruption."