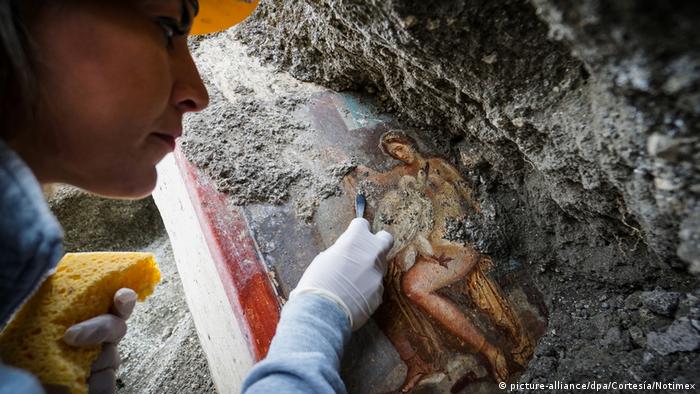 Archaeologists have discovered a fresco in an ancient Pompeii bedroom that depicts a sensual scene between the Greek god Zeus — or his Roman equivalent, Jupiter — disguised as a swan, and Leda, a legendary Spartan queen from Greek mythology, the Pompeii administration said Monday.

Such iconography showing the mythological figure of Leda being impregnated by the god in swan form was a fairly common decoration in homes in Pompeii and Herculaneum, two towns near present-day Naples that were destroyed in A.D. 79 by the volcanic eruption of Mount Vesuvius.

Still, the fresco remains an exceptional find, according to Pompeii archaeological park director Massimo Osanna, who pointed out that Leda was painted in an unusual way, making her look directly at anyone who saw the fresco upon entering the bedroom. "Leda watches the spectator with a sensuality that's absolutely pronounced," Osanna told Italian news agency ANSA.

In the scene, Leda protects the swan with her cloak as the bird sits on her lap. Osanna noted that the fresco celebrates the Greek "myth of love, with an explicit sensuality in a bedroom where, obviously beside sleep, there could be other activities."

Leda is an important figure in Greek mythology. According to myth, the children she had with the god Zeus and a mortal king of Sparta included the beautiful Helen of Troy and the twins Castor and Pollux. 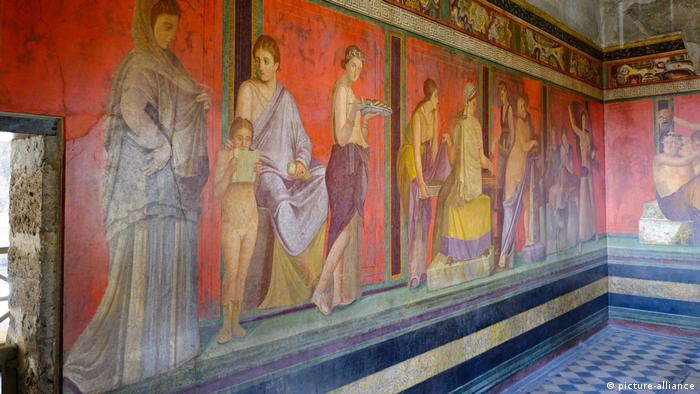 Frescoes were popular in Pompeii homes: Shown here is the Villa of the Mysteries

The bedroom was located near a corridor by the entrance of an upscale domus, or home, where another splendid fresco was discovered earlier this year, said the archaeological park authorities.

The newly discovered fresco's colors are still remarkably vivid. It emerged Friday through works to consolidate the ancient city's structures after they deteriorated over time, causing some ruins to collapse, the tourist site's officials said.

Pompeii Director Massimo Osanna said one hypothesis is that the home's owner was a rich merchant who wanted to give the impression he was culturally advanced by decorating his house with myth-inspired frescoes.

"The amazing discoveries continue," Osanna posted on Instagram along with a picture of the find.

The lava may have cooled 2,000 years ago but Pompeii is a hot destination this Valentine's day with a special opening of the exceptionally preserved House of the Chaste Lovers. (10.02.2017)

Michelangelo's David does not have an earthquake-proof pedestal. While he's still standing, numerous historical treasures in central Italy have been damaged or destroyed by the recent quake. (01.09.2016)