What do Germans fear the most?

An annual study has again asked people what they fear the most. After almost two years of COVID pandemic, somewhat surprisingly, health issues do not top the list. 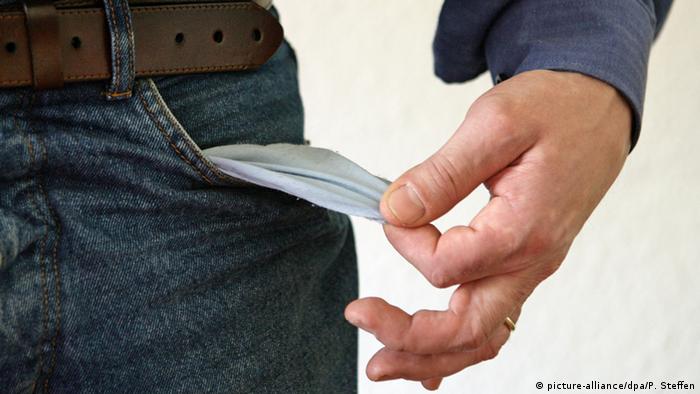 Germans fear running out of money

For years, there was no new public debt in Germany. This gave citizens the reassuring feeling of living in a fiscally sound country — until the coronavirus pandemic came rolling over our world like a tsunami.

Since then, Germany has again incurred debt on a large scale. In mid-April the Bundestag federal parliament approved loans totaling €240 billion ($284 billion) for a COVID recovery fund — a record figure. Germany's total debt has now risen to €2.2 trillion, also an all-time high.

This unfamiliar rising national debt frightens many Germans — that's the conclusion of the latest annual study carried out on behalf of R+V, one of the country's largest insurance companies. The study has been asking people in Germany about their biggest fears on topics such as politics, economics, environment, family and health since 1992. It's all part of risk assessment.

Last year, the company found that Germans feared Donald Trump — and in 2019, researchers said Germans were less fearful than ever before.

"The mountain of debt which has piled up at the federal, state, and local levels to deal with the coronavirus pandemic is causing Germans the greatest worry this year," said Brigitte Römstedt, who leads the R+V info-center, which is responsible for the research findings.

According to her, 53% of Germans fear that the government will permanently raise taxes or cut services and benefits because of the debt burden from the coronavirus crisis. That tax fear is ranked No. 1 in the survey.

In contrast, the fear of serious illness — also from being infected with coronavirus itself — ranks only 14th on the angst scale, with a level of 35%. That comes as no surprise to survey leader Römstedt: "Last year, too, only a third of Germans were fearful of becoming infected, and that was when there were not yet any vaccines.

"People like to push thoughts of illness away, we all know that. But when it comes to money, then, also in my experience, the fears are always very large," Römstedt told DW.

How worried is Germany about refugees from Afghanistan?

Hushed topic in the election campaign

German political scientist Manfred G. Schmidt assumes that the bill for the coronavirus debt will only be presented after the Bundestag federal election on September 26. "The parties have successfully hushed up the issue," Schmidt told DW. The professor at Heidelberg University has for years been advising the R+V insurance company and helping with evaluation of the fear study.

The second- and third-ranked fears in the study are also about money. Every second German fears that the cost of living will increase (roughly the same as last year, 51%) and that German taxpayers will be asked to pay for the European Union debt crisis (last year, 49%).

However, the worry of an economic downturn has decreased. At 40%, this is ranked number 10 on the list of worries. Last year, when business stalled due to the pandemic, it was in fourth place, with 48%.

The pandemic ruthlessly exposed many shortcomings in Germany. One example is the lack of digitalization, which worries 38% of respondents. "I was very surprised by that," Römstedt said.

"The fact that Germany is lagging on digitalization only landed in 12th place on the fear ranking — and that follows a year and a half of homeschooling and working from home, where people have experienced how it's lacking."

While the consequences of the coronavirus pandemic are perceived as very concrete, the following equation has applied so far when it comes to climate change: the more abstract the threat, the lower the fear of it. Last year, 40 percent of Germans were worried about the effects of climate change.

However, since disastrous flooding in the states of North Rhine-Westphalia and Rhineland-Palatinate, Germans now see a more urgent danger. "At the end of July, we conducted an additional online survey of 1,000 citizens about their fears relating to the environment," Römstedt explained.

Natural disasters and extreme weather were fears for 69% of citizens. Some 61% of respondents worried that climate change was having dramatic consequences for humanity. Such levels of fear are more than 20 percentage points above "normal" values.

The level of angst probably also shot up "because people were seeing disturbing pictures from the flood-affected areas every day [during the survey period]. I can well imagine that these fears will somewhat recede in the coming year, if we stop seeing these images so much," Römstedt concluded.

Concerns surrounding the topic of migration are once again among the top 10 in 2021, despite there being no large movement of refugees toward Germany during the past year. The fear that state resources will be overburdened by refugees and migrants grew to 45%, putting it in fourth place (last year it was eighth place, with 43%).

"Other surveys also indicate that this topic of refugees and asylum seekers is the third-most-important topic, after COVID and climate change," Schmidt said.

With its 2021 study, the insurer R+V has measured the anxiety-pulse of Germans for the 30th time. And with that, no trend or specific fears have appeared to persist through the research. As it turns out, a prejudice has been refuted: "In the many years I have managed the study, one thing has become clear to me: The oft-cited term 'German angst' is fundamentally wrong. Germans are not fearful," explained Römstedt.

If anything, Germans are reacting to very real threats. For example, after the attack on the World Trade Center in New York on September 11, 2001, fear of terrorism rose sharply. And the fear of unemployment climbed when there were mass layoffs.

"As the threats subside, the fears also decrease. There is no one fear that is always on top; rather, it depends entirely on the current situation," Römstedt said.

Climate change brings more extreme weather to Europe, Hungary's tax reforms spark public protests, and Paris hopes to stage the 2024 Olympics without blowing the budget. Also: newcomers to Italy build their culinary confidence, the threat to Europe from the new Centaurus COVID variant, and the campaign to give the UK's Cornwall county more powers.