We need ′a new coalition of decency′ against populism | Culture| Arts, music and lifestyle reporting from Germany | DW | 12.11.2018

We need 'a new coalition of decency' against populism 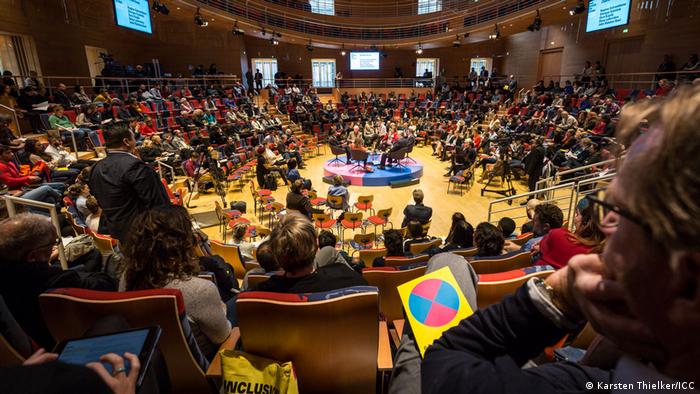 Former Governor General of Canada Adrienne Clarkson and author John Ralston Saul are the co-founders of the Institute for Canadian Citizenship. The foundation hosts a series of talks called "6 Degrees Citizen Space," which focus on citizenship and cultural diversity.

They are now holding a "6 Degrees" event in Berlin, taking place on November 12, and hope to establish a regular European series. DW met them while they were in the German capital to plan the project.

DW: Why did you decide to start the Institute for Canadian Citizenship?

John Ralston Saul: We started the Institute for Canadian Citizenship a dozen years ago on the basis that there were thousands of volunteer organizations working with refugees and immigrants, but nobody was working with new citizens.

There was a sort of assumption that on the day of your citizenship ceremony, you were transformed and could just move on and become involved. Some people can, but many people don't know how to do it. So the idea was to create an institution that would create grassroots programs across the country and that would help people become involved.

Among the programs organized by your institute is the "6 Degrees Citizen Space." What is this project?

Saul: It's a three-day event held every year in September in Toronto: 5,000 people from 25 countries come through it. It's a complete mix of people. It's not like some collection of politicians talking to each other, or social scientists talking to each other. We have writers and artists who participate. And about 50 percent of the participants are under 30. 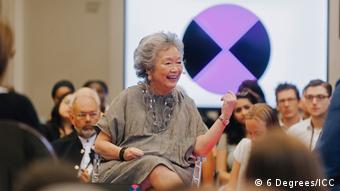 Adrienne Clarkson was a prominent journalist before serving as Governor General of Canada, from 1999 to 2005

Adrienne Clarkson: Inspired by our experience and by our institute's practical programs to help people become citizens, we felt that our foundation was ready for a good conversation. And many people felt that this conversation should not only be happening in Canada, but that we should also be bringing it abroad. We were invited to do one in The Hague after our initial one in Toronto in 2016. We organized a one-day version of it and it was a great success.

And now we see Germany as a logical partner for us to hold another 6 Degrees. Germany has been dealing with the pressure of people coming here, and they've been dealing with it relatively well, considering that they have not dealt with it before.

Why is such an initiative particularly important now? 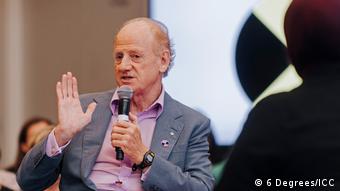 Saul: At a time when it's clear that the narrative around immigration and citizenship has broken down in the West, and that people who want to encourage fear have taken control of the narrative, there's a desperate need to create a new one, and replace the 75-year-old postwar narrative. That can't be done alone. That requires all those different kinds of people from different countries, different languages, working together to create it.

What are some of the concrete programs of the Institute?

Saul: One of them is to find out what people from other countries have to tell about concrete programs that really work.

And we have a couple of stories to tell as well. One of them is the Cultural Access Pass. It's a one-of-a-kind program in the world invented by our institute. On the day of your citizenship ceremony, you can sign up online and this will give you and your family free access to about 14,000 cultural institutions. The idea is that a central part of becoming a citizen is to be part of the culture. You can't be part of the culture unless you're somehow helped to get in the core of it.

That's just one of the exportable programs; it could be done in Germany.

Clarkson: When a doctor comes from Ghana, he'll come to Canada and be told: "Well, that was fine there but you can't be a doctor here," period. There's no system to help them get through. That's because the professions themselves regulate this, and they're very protective.

Saul: So we're trying to start a program and we'd like to work with the Germans on this, to try and drive countries and provinces to put programs in place to help people get their professions recognized faster. So there's tons of stuff like that comes out of it.

One of the presentation texts of you "6 Degrees" project states that "too much energy is lost by being conventional." What makes the "6 Degrees" format unconventional?

Clarkson: I think it's unconventional because there's no hierarchy in it. Even though we have very well-known people, whether Margaret Atwood or Bernhard Schlink, or very famous painters or musicians taking part, they take part in the conversation as equals. That is very empowering to people, that their ideas will be listened to on an egalitarian basis. It's not, "What do you as a 17-year-old think?" It's simply, "What do you think?" And things come out that are very interesting. 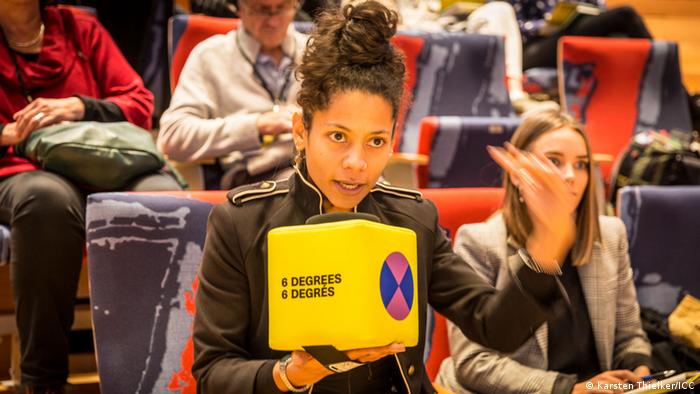 Thinking outside the box: Emilia Roig, director of the Center for Intersectional Justice at the 6 Degrees talk in Berlin

Saul: And the physical part of it is unconventional, which is these circular discussions. We have about 350 people sitting around a very low circular stage in the middle. So you're not up against the wall, protected, with the audience in front of you. You're surrounded by the audience. It's not a panel; there are no statements; you don't get five minutes at the beginning. It's a discussion from the first minute. We spend quite a bit of time preparing with everybody beforehand, so everyone can just start a conversation, as if they were at a dinner. It leads to a very surprising conversation, in which nobody is protected in a way. And out of that comes completely unexpected ideas.

You mentioned picking Germany for the way it has been dealing with its refugees since 2015. The situation is however currently developing with the rise of the far right in the country and throughout the world: What is your perspective on the current developments?

Saul: We are seeing today that the narratives and the agreements on how to run societies that were put in place after the Second World War are breaking down. There really hasn't been an acceptance of how serious this is. People are now talking about the rise of populism and the return of racism and of extreme-right-wing parties, as if this came out of nowhere. A number of us have been writing about this for more than 15 years. You could see it coming, because you could see the systems breaking down.

It didn't seem that way at the top, because at the top it was all so beautifully interwoven with habits and established policies. People were not understanding that what was going wrong was not little things; it was a fundamental breaking down of a now 75-year-old approach to things. So in a way, "6 Degrees" is really about rethinking those narratives among the people who are not frightened. These people are going to have be the new coalition of decency. They have to figure out how to do that and it's going to be very hard work. And "6 Degrees" is a very interesting place and way to set about doing that.

Rohingya Muslims are a people without a state. This is at the center of an ongoing humanitarian crisis in South Asia and the biggest obstacle to finding a solution. DW examines Myanmar's controversial citizenship laws. (02.11.2017)